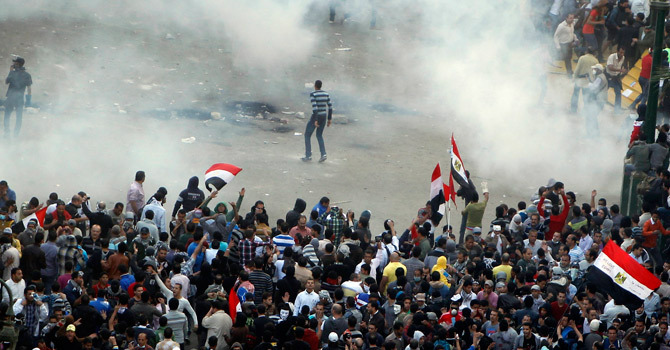 If ever there was a time when President Morsi could use a graceful exit, now would be it. After negotiating a fragile ceasefire between Hamas fighters and the Israeli Defense Force for which he received glowing accolades, Morsi now appears to be fighting his own war at home. The streets of Cairo are teeming with protesters furious at the presidential decree protecting the Islamist dominated constituent assembly, replacing the prosecutor general, insulating his decisions from scrutiny or oversight or any kind, and granting him the power to legislate in the name of the "revolution." By the looks of rapidly escalating events this evening, some might say Egypt is lurching its way to a second uprising.

Emboldened by the popularity earned after such high profile negotiations between Israel and Palestine, with US endorsement, Morsi clearly felt that now was the time to purge his government of unnamed counter-revolutionary forces who block the progress to a true democracy in the new Egypt. Others, however, see it as the most blatant power-grab in Egypt’s modern history. The truth most likely lies somewhere in between, where Morsi’s select circle of advisers convinced him of a revolutionary authority he no longer has. Regardless of how he came to his decision, the response to his edicts has been overwhelming.

Egypt’s political forces and thousands of ordinary citizens streamed onto the streets in and around Tahrir Square, swelling the numbers of protesters since before the announcement of ‘Morsilini’s decree” (as some activists have begun to call it). As far as the opposition is concerned, Morsi’s move was the best thing to happen to unite the ordinarily fractious political forces. Opposition figures including Amr Moussa, Mohamed ElBaradei, Hamdeen Sabbahi, and others denounced Morsi’s move, galvanizing a divided and disorganized opposition and calling for an open-ended sit in that would only end if Morsi rescinded his self appointed status as an untouchable ruler of Egypt.

Street battles with protesters have already cost at least one life, according to journalists observing field hospitals in Tahrir Square, and wounded scores more. Police brutality aimed at quashing protests too closely mimics the tactics used under Mubarak and his successor, the Supreme Council of the Armed Forces. The recurrence of reminiscent scenes from a dark time is not lost on the protesters who fight with renewed fervor, bolstered by none other than the Ultras. The battles have extended well beyond Cairo, reaching Assiut, Alexandria, and Port Said, and other major towns. The anger, however, does not yet appear to have reached the levels seen during the 18-day uprising or even that of the Mohammed Mahmoud clashes last year. Islamist supporters remain steadfast in their support of Morsi’s decisions through which they hope to transform the country.

The Judges Club’s decision to suspend all court hearings until the revocation of the controversial decree has particularly far-reaching consequences. In the wake of the Supreme Judicial Council’s statement condemning the presidential decree, the interruption of all court hearings remains one of the few options remaining to a judicial branch that remains embroiled in an ongoing struggle with Morsi. The implementation of such a protest, however, relies on local judges following through on calls out of Cairo. The call to strike resonates with some in Cairo and surprisingly the public prosecutor in Alexandria, but others such as the reform judges from ‘Judges for Egypt’ have pledged to abide by the controversial decree.

Given such a charged climate, Morsi is left with a choice: either back down or crackdown. If the president decides to rescind his declaration, he risks appearing weak to his Islamist supporters in the face of a largely secular popular opposition (though some moderate Islamists, such as those from Abdel Moneim Abul Futouh’s Strong Party have joined in the protests). If he decides to crack down on popular protests and political opposition figures, he risks a severe escalation in popular anger. A crackdown could also hurt the already ailing economy and threaten the country’s stability even further in the face of an impending IMF loan that Morsi hopes will open the floodgates of other international loans and foreign investment.

With neither choice offering a good ‘out’ to the current crisis, one should expect something that lies somewhere between either extreme. In true Muslim Brotherhood pragmatism, Morsi will first try to calm the situation – as evidenced by initial attempts from Prime Minister Hisham Qandil in his public statement asking protesters to accept the president’s decision and “move on.”. If that fails, and if the judiciary finds momentum in its calls to strike, Morsi will likely turn to negotiating with prominent judges and opposition leaders. In the end, a settlement that neither rescinds the decree but works on a solution that negates absolute control seems the most logical endpoint based on previous patterns of behavior when faced with enormous public backlash.

Some may call it a worst case scenario as Islamists push through a gradual expansion of power through patience and negotiation. Though dismally pessimistic, and too dismissive of liberal and secular forces in their ability to moderate the Islamist powers, such an outcome is possible without a unified and principled opposition dedicated to checks on power.

Video below shows Egyptian Central Security Forces beating and dragging a protester down a street in downtown Cairo: