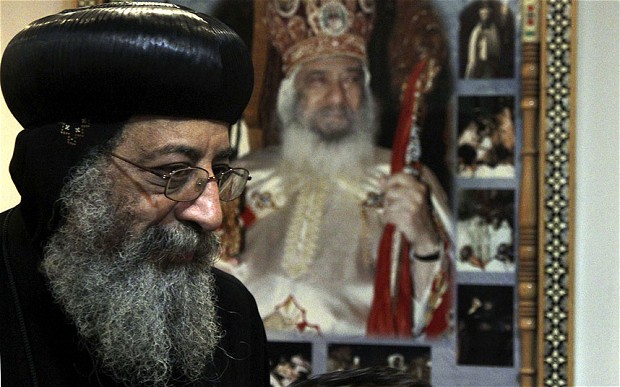 In assuming his new position, Pope Tawadros II, Egypt’s new Coptic pope, faces significant challenges, both within the church and in the country as a whole. These include matters relating to church reform and management, as well as matters relating to the status of Egypt’s Copts, and their role within the state. He has already set himself apart from his predecessor, the late Pope Shenouda III, by emphasizing the church’s apolitical role in Egypt.

The current Papal Regulations limit those eligible to vote in the process to just over 2,400 members of the church. Critics of the Papal Election Regulations, which was introduced in 1957, say it is no longer suitable for Egypt’s political, economic, and social climate. Many object to the process of selection itself, by which a blindfolded child draws the name of the new pope, and call for the pope to be chosen by way of a ballot instead.

Under the church’s 1938 bylaw, divorce was permitted in the Coptic Church for nine reasons: physical assault, immoral behavior, aversion to the relationship, one of the spouses becoming a monk or nun, adultery, separation, and conversion. However in 2008, the late Pope Shenouda III repealed this regulation, stipulating that divorce is permissible only in the case of adultery in accordance with the bible.

The church has witnessed an increase in the divorce rate, with many Copts opting to convert in order to file for divorce. After their divorce, they subsequently return to Christianity, a practice frowned upon by many. Others prefer to proceed with a civil divorce through the judicial system, but then are unable to remarry in the church. Speaking about the 1938 bylaw, Pope Tawadros II said, “Everything is open for discussion, especially since these bylaws were written by secularists and not clergymen. We must find solutions to satisfy critics, but not at the expense of biblical teachings.”

The issue of divorce within the Coptic Orthodox Church is one that must be addressed, not only for the sake of members of the church, but also to avoid a predicament between the church and the judiciary.

There are calls to expand the Clerical Council’s powers so that the church may have full representation in civil matters, similar to citizen representation through parliament. This differs from the council’s current tasks of overseeing religious schools, working in collaboration with the Holy Synod and performing duties related to church-state relations. The restructured council would be entitled to propose laws to the Parliament, President, or Prime Minister.

4. Relationship with the Coptic youth

The January 25th revolution spawned a generation of Christian youth who refuse to submit to orders from the pope and church. Despite the church’s official stance, refusing to participate in demonstrations, thousands of Coptic youth joined their Egyptian compatriots in the revolution. The new pope, with his stance on distancing the church from politics, will benefit from encouraging groups, such as the Maspero Youth Union, to take on political issues relating to the Coptic minority.

1. A Unified Place of Worship Law

A draft unified law on building places of worship, which has been gathering dust within the walls of parliament, represents a vital solution to sectarian strife in Egypt. Several incidents this year alone were sparked by the construction and maintenance of churches. Protecting the right to build churches, particularly in Upper Egypt and the Delta, through an enforced law would help prevent the escalation of sectarian incidents. Speaking about the law during a television interview, the Pope has said “I’m sure that passing a unified law for building churches will hinder extremists from trespassing on church lands as happened last Monday, when a group of Salafist Muslims occupied church land in Cairo’s Shubra Al-Kheima district.”

President Mohammed Morsi may have a Coptic aide, however Copts continue to feel discriminated against. Copts complain of being marginalized, and prevented from assuming senior governmental positions, particularly ministerial, gubernatorial and diplomatic positions.  The Pope must address the need for an anti-discrimination law criminalizing religious intolerance, one that ensures full citizen rights for minorities. During one of his televised interviews, he spoke out against a parliamentary quota for Coptic representation in the parliament.

While the elected Pope agrees on Article 2 and the role of Shari’a in the constitution, there are several controversial articles which will have a direct effect on Egypt’s Copts. These include articles relating to gender equality, citizenship, as well as many articles in the Freedoms and Rights chapter, particularly those addressing freedom of religion and the right to perform religious rituals. Pope Tawadros II has already publicly stated that he would reject a constitution which imposes a religious state in Egypt.

4. Justice for Victims of Sectarian Violence

The issue of violence against Christians is possibly one of the most difficult issues facing the Pope. Justice has yet to be served in some of the past two year’s most violent attacks on Christians, including the New Year’s Eve bombing at Alexandria’s Qadisayn Church and the Maspero Clashes in October 2011.

The selection of the new pope comes at a particularly sensitive time in Egypt’s history. With an Islamist movement taking control of the government by way of the first Islamist president, Tawadros II’s approach to Coptic issues will require both wisdom and rationality when addressing widespread sectarian strife since the fall of Mubarak.

In his initial statements, speaking about Morsi, Tawadros II said: “The president was democratically elected by the Egyptian people, and is therefore the president of all Egyptians and a symbol of post-revolution Egypt. The church will deal with him with love as it always has.”

Haitham Tabei is a special correspondent for the Washington Post and Asharq Saudi newspaper in Cairo.