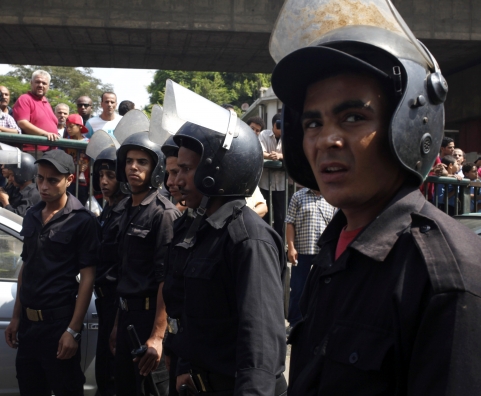 Egyptian president Abdel Fattah al Sisi approved a new terrorism law earlier this month. While disturbing, the law is not surprising when viewed in the context of Egypt’s consistent rhetoric of its war against terror. With the Egyptian militant organization Ansar Bayt al-Maqdis recently pledging allegiance to the Islamic State of Iraq and al-Sham (ISIS), the threat is real. The recently passed law, however, comes at a high cost.

First, the terrorism law is deeply flawed, as it is overly vague and allows legal culpability for constitutionally-protected actions. According to Article 1 of the new law, “a terrorist entity is any group which disrupts public order or threatens the safety, security or interests of society, or harms or frightens individuals or threatens their lives, freedoms, rights or security or harms national unity…” Here, any organization that the Egyptian government claims has ‘disrupted public order,’ ‘threatens the interests of society,’ ‘frightens individuals,’ or ‘harms national unity’ can be labeled a terrorist organization. In reality, any organization which publicly expresses displeasure with the social or political status quo in Egypt could foreseeably fall into one of these categories.

The Cairo Institute for Human Rights Studies criticized the potential designation as a terrorist entity any group which calls “through any means to stop a specific law or overturn a court verdict,” noting that such wording could include peaceful political expression. Free expression is guaranteed in Article 65 of Egypt’s constitution. This law, however, empowers the government to label organizations which peacefully and constructively express political or social opposition as terrorists. In practice, this law could be used to silence, for example, organizations calling for protests against the verdict in which charges were dropped against ousted president Hosni Mubarak.

Second, the law gives the executive branch of the Egyptian government potentially damaging power over the rights of Egyptians with no or insufficient due process. The government first has the right to dissolve, freeze the assets of, and arrest the members of an organization designated as a terrorist entity in a manner discussed above. Under Article 74 of the Egyptian constitution, a political party can only be dissolved by a court judgment. The government can also create a list of terrorist entities (Article 2) and a list of national security threats (Article 5). In short, the executive branch, security forces, and the public prosecution are empowered to identify and eliminate terrorist organizations by ending the organizations’ activities and seizing their property.

Missing from the bill is any judicial or legislative involvement, and no requirements of evidence are to be submitted to any independent reviewer. While groups are allowed to appeal decisions labelling them terrorist entities, the label itself allows wholesale removal of all political, property, and monetary rights, which would only be restored if the appeal were successful—a process which the law itself allows to take up to three years. Effectively, the Egyptian government can unilaterally remove all functional rights from any organization without having to present any evidence of its claims for three years, potentially violating constitutional Article 54’s due process requirements for restricting rights and freedoms.

When considering the political context of this law, is important to remember that Egypt does face legitimate terrorism threats, primarily but not exclusively in Sinai. Ansar Bayt al-Maqdis has been a thorn in the side of every Egyptian government since 2011 and shows no sign of stopping. The Egyptian people have legitimate fears of violence which any government would have to address.

However, laws which combat terrorism but still allow for free political expression exist both within Egypt and around the world. Article 237 of Egypt’s constitution, for example, allows the government to combat terrorism, but cannot logically be inferred to violate the free expression guarantees of the same document while maintaining consistency. The removal of all rights from peaceful and lawful organizations will not defeat Ansar Bayt al-Maqdis, and the Muslim Brotherhood has already been prevented from functioning, had its assets frozen, and has been declared a terrorist organization. The terrorist entities law is yet another example of legislation passed by the Egyptian authorities which aim to restrict public space. It joins the so-called NGO law, which has given the Egyptian state regulatory authority over NGO funding and activity, and a restrictive protest law requiring that the ministry of interior receive prior notification of all demonstrations.

In the context of these previous legal actions, the goal of Egypt’s new terrorism law appears to be to suffocate the country’s civil society by granting the government the ability to eliminate any group it sees fit without providing evidence or reasoning. The ambiguous wording also affords it the opportunity to silence critics, activists, and journalists. This will chill any attempts to present alternatives to the political or social status quo, which is a key function of civil society and a free media in a liberal democratic society.