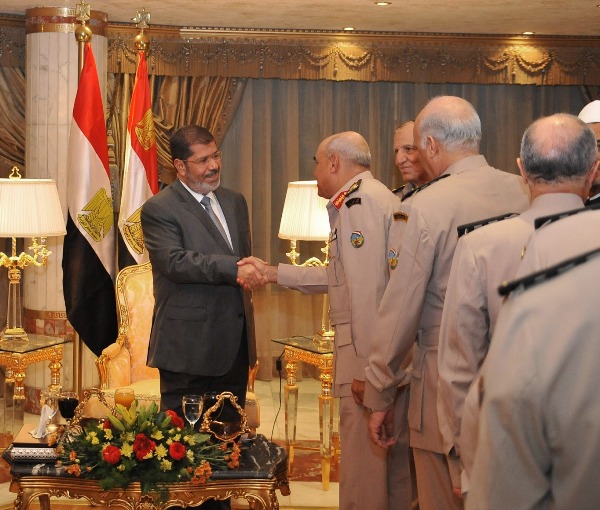 In post-revolution Egypt, there are two types of capitalists dominating the economic landscape: Islamist capitalists, embodied by the ruling Muslim Brotherhood and military capitalists, embodied by the country’s affluent army generals. Both groups are content to work in and benefit from the free market milieu created about twenty years ago by the previous regime. However, observing the Egyptian stock market, home to the country’s liberalized economy, one finds a shocking surprise: no Muslim Brotherhood or military businesses are listed, with very little information about either of their financial records made public. Under an Islamic government that purports a global openness, the two prevailing business empires continue to operate clandestinely.

Moreover, a hidden rivalry exists between the two monolithic groups, where the Brotherhood faces certain limitations. While newly elected Muslim Brotherhood president, Mohammed Morsi sacked the military’s top leaders, he did not attempt to go anywhere near the powerful institution’s economic empire. With the Brotherhood businessmen on a conspicuous mission to control the economy, they face tough competitors in a group of army generals who manage a large number of profitable enterprises in vital industries. To make matters worse for the Brotherhood, they lack the necessary experience to compete with the military in the fields of strategic manufacturing.

Many of the Brotherhood’s key businessmen released from jail last year were met with a door wide open to new and unlimited opportunities. The previous regime’s significant restraints on them placed a ceiling on where they could invest as well as on their profit margins. As a result, they were largely confined to selling imported goods and running giant supermarket franchises. In fact, the list of Muslim Brotherhood-owned businesses reveals that their experience is primarily limited to retail.

It is, however, almost impossible to locate every single business they own, and the lines between the money-making properties of the rich organization and those of specific influential individuals within it are blurred. The only available official record on their businesses appeared in 2007, when a group of Brotherhood members were brought before a military court; at the time 72 companies were listed. The list included many clothing shops as well as a construction firm. Today, their publicly known properties include Turkish luxury furniture stores, and clothing stores located in Cairo’s upscale malls, a fast food chain with branches in the Gulf, and supermarket franchises in Cairo’s affluent neighborhoods. One of them owns a diary mill—the closest they have come to manufacturing, with no factories owned by Muslim Brotherhood members.

After being released from military prison, Khairat al-Shater, the Brotherhood’s Deputy Guide, is seen seizing the opportunity as his fraternity ascends the rungs of power. In July, al-Shater launched a new giant enterprise. However, sticking to what the Brotherhood knows best, he launched a new supermarket franchise, Zad, in Cairo’s affluent neighborhood of Nasr City.

The picture looks fundamentally different on the military front. The army has extensive experience with heavy and light industries, producing civilian goods, and owns several plants throughout the country, manufacturing indispensable products including steel and cement. Immediately after the revolution, the generals opened an industrial chemicals complex in Fayyum, producing in-demand fertilizer, and a cement factory in North Sinai. The complex came just a few years after opening a steel factory in Qaliubiyya, and purchasing a railway factory from the state on the outskirts of Cairo. Enjoying various advantages, including tax and customs exemptions, the military institution in Egypt has been managing its own busy manufacturing lines for more than thirty years.

The first public signs of a conflict between the military and the Brotherhood’s enterprises surfaced last month. A leading member in the Brotherhood accused former chief of staff, Lieutenant General Hamdi Wuhiba, of corruption. Prior to his dismissal by Morsi last August, Wuhiba managed a complex of twelve factories grouped under the umbrella of the Arab Organization for Industrialization (AOI.) The Brotherhood’s Hasan al-Brins claimed that Wuhiba kept 5 percent of AOI’s annual profit for himself. Outraged, Wuhiba denied the allegations and threatened to take al-Brins to court for slander. The issue came to a swift end with al-Brins apologizing for spreading false information. The incident was a sign, at the very least, that the Brotherhood is keeping an envious eye on the military’s manufacturing ventures.

Brotherhood members seemingly aspire to be like their military counterparts, particularly since they have enough financial support from countries such as Qatar and Turkey to do so. Unfortunately, they lack the qualifications and experience to achieve that. President Morsi advocated a national economic “renaissance,” (Nahda), during his campaign, which included ambitious promises of heavy industrialization. Having ascended to power, Morsi now faces the crucial dilemma that his Brotherhood peers lack the essential experience needed to implement the project.

In an attempt to find a solution to their dilemma of inexperience, Brotherhood members have turned to the former regime’s business tycoons to run manufacturing enterprises on their behalf. Hasan Malik, the most influential of the Muslim Brotherhood’s businessmen, and possibly in all Egypt, recently founded a new businessmen’s association. Following a model that Gamal Mubarak used, Malik created a club for business tycoons in his close circle and called it ‘EBDA,’ or ‘Start’. The members of this association include not only owners of Brotherhood supermarkets and import companies; it also reels in non-Islamist businessmen from the steel and cable industries. In addition, the Brotherhood is in close collaboration with Mubarak’s minister of trade and industries, Rashid Muhammad Rashid. Last month, when Malik accompanied president Morsi on his trip to China, he invited many Mubarak- era tycoons to join and benefit from the potential opportunities – under his patronage.

Despite the rivalry, it seems that the two groups of secretive capitalists have reached an unspoken agreement. President Morsi needs the support of the new military leaders he recently appointed, or at the very least, he needs them to not work against him. As a result, his government has made no effort to ensure that military businesses are subject to investigation by state accountability apparatuses. In return, the military seems satisfied to relinquish the reins of power, with no threats of an impending military coup.

This could easily continue to fly under the radar, as it has for decades. However, the Muslim Brotherhood government is faced with yet another dilemma. With Egypt applying for a $4.8bn IMF loan, it has also invited a large delegation of American CEOs in an attempt to encourage US investment in Egypt. Large loans and investments of this nature require an overtly transparent economy, one where all enterprises are equally accountable under state laws. There are no signs that the Brotherhood’s businessmen plan to bring an end their secretive tactics anytime soon, or force their military counterparts to do so.

Zeinab Abul-Magd is an Assistant professor of Middle Eastern history at Oberlin College and the American University in Cairo.