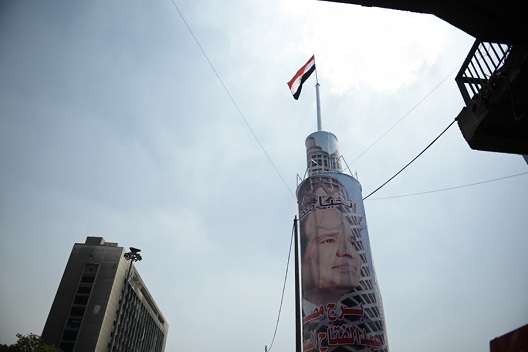 A military brass band in a polling station, the right to draw little hearts on official ballots, one explosion, and an unplanned day off: as the voting in Egypt’s twenty-first day of national elections since 2011 ends, there were only a few surprises but some preliminary conclusions can already be made.

Not free and fair

General Abdel Fattah al-Sisi, as the effective incumbent and dominant party, did not need to resort to primitive electoral manipulation of the ballot stuffing, group-voting variety. But his campaign has been accused of doing so anyway, prompting his opponent, Hamdeen Sabbahi, to issue a statement:

The violations and abuses to which campaign members were subjected brings to mind presidential elections during the days of Hosni Mubarak; and the National Women’s Council has recorded the political utilization of children to invite people to vote for candidate Abdel Fattah al-Sisi.

Elections are not only judged by what occurs on D-day. In the run-up to voting, electoral silence was violated countless times. While ultimately it was not penalized for it, Sisi’s campaign handed out tens of thousands of energy-saving light bulbs. They relied on state resources for his campaign, including the use of planes to drop leaflets and the army’ s spokesperson office as his private secretariat and its lavish hotels as meeting rooms. Caps on campaign spending, which were already increased in March, were made redundant through a loophole that limited financial donations and spending but not in-kind gifts, leading to the explosion of Sisi posters and billboards on nearly every other lamppost and sign across Cairo, gifted by wealthy supporters. As voting took place, advertising material near and even in polling stations has been ubiquitous; voter intimidation, mostly verbal and threatening, was rife—but, quite like the experience of expatriate voters in Egyptian embassies last week, it was not conducted by government or security forces, but rather by majority voters. Some pockets of strong Muslim Brotherhood influence also witnessed instances of intimidation of voters, committed by sympathizers of former president Mohamed Morsi rejecting the electoral process. In at least one instance, Brotherhood sympathizers forced shut a polling station to prevent any voting, requiring government intervention to be reopened.

Not a measure of Sisi’s popularity

With the Muslim Brotherhood electorate challenging the legitimacy of this election and independent activists actively boycotting, a sizable mass of the electorate is sitting this one out. Add to those the politically apathetic and those who opted for a day by the beach over casting a ballot in a predetermined suffrage, and it becomes clear that the outcome of this vote will hardly present a proper representation of opinions in Egypt. The latest opinion poll by the Pew Research Center, published last week, suggested that 54 percent of those asked held a favorable view of Sisi, versus 45 percent who view him unfavorably.

Sisi’s election is not a return to the Mubarak days

It is worse. Buoyed by popularity the long-standing dictator never had, Sisi’s de facto rule has resulted in at least 16,000 arrests between July 3, 2013 and May 15, 2014 (though some estimates stretch beyond the 20,000 mark). During the same period, military courts tried 874 civilians, other courts sentenced more than a thousand to death, and security forces have held countless people without charge for months on end, including journalists and others on hunger strike. Running on a violent platform of “eradicating” the Muslim Brotherhood—a group now only referred to using the “terrorism” shorthand—a rise in altercations with protesters, and unchecked police brutality is likely.

Polling stations were mostly empty, to the joy of voters who managed to cast their votes in minutes—and to the worry of the Sisi campaign, and the despair of their aligned television presenters. Into the second day of voting, the media bellowed to urge people to go to the polls and the government took the unusual step of declaring the second day of polling a public day off. After considering changes to procedures that would allow voters to cast their ballot in places other than their registered polling stations, the electoral commission decided to extend voting for a third day. It was an unusual move which, because of the logistical complications—ensuring polling stations are open, tens of thousand of poll station officials are paid, security is maintained, etc.—is a clearly desperate maneuver. Several popular malls even closed at 4 pm.

Oversimplifying voting procedures, the electoral commission declared it would consider any ballots where “the voter expresses their opinion” valid. Regardless of how voters express their view—writing down words, ticking both boxes with different signs, drawing hearts, and writing “I love you [candidate’s name]”—the commission aims to ensure that the votes of less educated Egyptians were not disqualified, including first-time voters who were exhorted to come out but may be unfamiliar with the voting procedures.

Another point of concern for the Sisi campaign is the average voter age. A poll conducted in early May found that significantly more people age fifty and older planned to vote, as opposed to those under thirty. Witnesses across the country confirmed this tendency—a foreboding sign for a campaign whose economic policy is based on subjecting young people to austerity, asking them to sacrifice their demands in favor of an Egypt that seems to only benefit a few.

Ultimately, it will not matter

Unfortunately, electoral history is written in half-lines and two digit numbers. Weeks from now, few details will remain. Election results will be stamped with a seal of approval from observers and media, and Egypt will be ushered into its Sisi era. Though its fundamentals will likely remain close to what Egypt has experienced over the past year or so, an important question will be the composition, organization, and role of the opposition. Concerned parties should consider this question sooner rather than waiting for yet another round of elections.

Mohamed El Dahshan is a development economist and a nonresident fellow with the Atlantic Council’s Rafik Hariri Center.