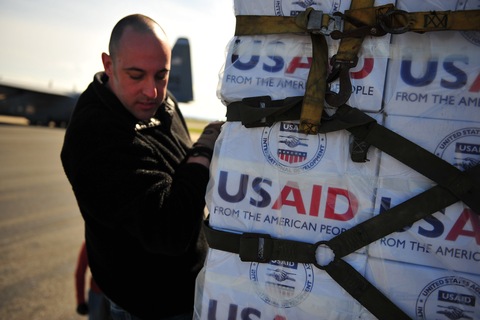 US-Egyptian relations have suffered the worst blow since the Camp David Peace Accords were signed in 1979 due to the unrelenting position of the Ministry of Justice and the Ministry of International Cooperation to pursue the prosecution (or rather, persecution) of individuals working for foreign-funded NGOs in Egypt. Despite the Obama administration’s repeated warnings against taking up this course of action, the executive authority in the form of the Supreme Council of the Armed Forces (SCAF) has taken no steps to halt the investigation attacking mostly human rights and democracy promoting organizations or to remove the travel ban placed on the 19 American citizens affiliated with them. The Ministry of Foreign Affairs played innocent, telling US officials that the matter remains in the hands of an independent judiciary and that it could not interfere.

Tahrir activists, local organizations, and international NGOs condemned the raid led by the prosecutor general on December 29, 2011, carried out on the basis of the widely discredited Mubarak-era law 84 of 2002 that grants the government extraordinary powers over the decision-making and operational aspects of civil society organizations in Egypt. Unnamed Ministry of Justice authorities quoted by Al-Ahram newspaper, however, assert that “evidence” obtained by the investigations indicate a causal relationship between anti-government street violence and foreign entities intent on keeping Egypt unstable. SCAF sources are also quoted saying, “Americans cannot preach to us night and day about the need to abide by the rule of law and then ask us to break the law to serve their interests.” The woman largely credited with being behind the charge, Minister of International Cooperation Faiza Abul Naga, lashed out at critics of investigations into illegal foreign-funding of NGOs citing infringement of national sovereignty.

During the Mubarak years, staunch anti-democracy promotion measures taken by the government and security forces were hardly uncommon and the impending prosecutions of NGO employees seem no different. Countless opposition figures such as Saad el-Din Ibrahim, Ayman Nour, and various Muslim Brotherhood members joined bloggers and human rights activists such as Alaa Abdel-Fattah, Gamal Eid, Wael Abbas, and dozens more in arbitrary detention and torture to prevent the spread of democratic ideas so destabilizing to an authoritative regime. Trials that did not meet international standards of fairness convicted even more on false charges. In the wake of Egypt’s uprising, however, not much has changed. The government has yet to repudiate the prosecution of thousands tried in military courts and protesters face incredible smear campaigns by government spokespersons on the one hand, and physical injury from overzealous police forces on the other. All of it done in the name of security and stability.

Despite the evidence revealing the acutely waged counterrevolutionary campaign, xenophobic Egyptian tendencies will not dismiss sovereignty concerns lightly. Paranoia over foreign spies and provocateurs ebbed and flowed in the various sit-ins held in Tahrir square since January of last year. During the recent parliamentary elections, voters shouted at and kicked foreign journalists out of some voting centers. Egyptians feel intense ownership over their revolution and most fear attempts by outside forces to coopt it for their own interests. American assistance has long provoked distrust in the minds of the ordinary Egyptians, seeing it as the means by which Mubarak and his cronies dominated the power strata for decades and ensured Egypt’s kowtowing to US policy in the region. Only a handful attributed any democracy building value to US aid, viewed as hypocritical particularly after unilateral action in Iraq in 2003.

The state media has played to these fears with reference to the “invisible hands” fomenting unrest in the streets of Cairo and elsewhere with thugs paid to attack government buildings and create chaos. Yet claims of some kind of covert Western intervention would be somewhat more believable if the same messaging would only scrutinize development-oriented and religious civil society organizations funded by Gulf countries or address the inconsistency regarding the billions in military aid given to the generals from the same source accused of trying to bring about the collapse of the country.

In manipulating public opinion, the SCAF assumes that – as the only real power broker and peacekeeper with Israel – the US cannot afford to forego its longtime strategic ally. They generals and Mubarak-era holdovers assume their interests will remain intact with limited civilian oversight brought about, in part, by limiting the activities of civil society. But they are wrong. The dire economic situation in Egypt will not only impact that opaque sector controlled by the generals, but also ordinary Egyptians who will not remain silent. The soccer riot in Port Said last week and subsequent march on the Ministry of Interior caused the Egyptian stock market to tumble. More and more US officials, congressmen, and commentators question the need for military aid to an unappreciative government – particularly one blaming it for its problems. The SCAF and Abul Naga may get their way by asserting control over civil society in Egypt, but they might stand to lose more than they gain.