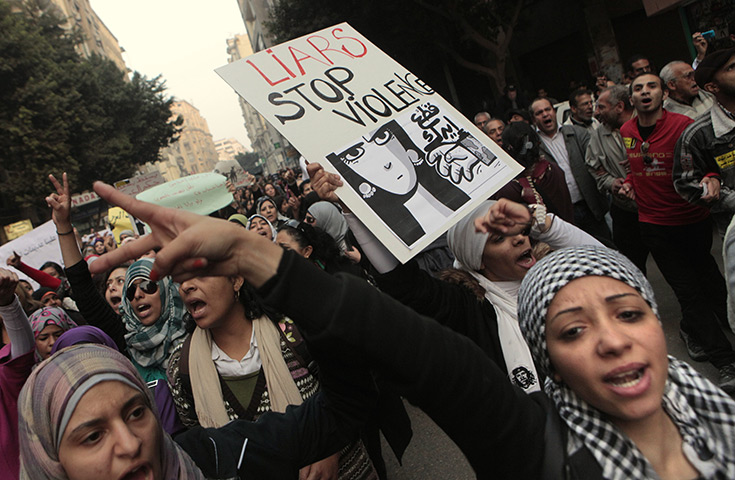 Before International Women’s Day (IWD) 2012 rapidly fades from memory and policy-makers return to other problems faced in their respective countries, a look at how this day played out in Egypt may shed some light on the massive challenges Egyptian women will face in the coming years. Recent events indicate that activists may find the already formidable mountain of obstacles to climb even higher in light of the parliamentary resistance to internationally accepted norms promoting equality for women.

On March 8, hundreds of women marched from the Journalist’s Syndicate to the People’s Assembly in a demonstration demanding basic equality and political representation. Many women’s rights activists who participated feel that the government and parliamentarians deliberately ignore their concerns surrounding the freedom to choose their own roles in society, despite playing an integral part in the revolution that overthrew Hosni Mubarak and in the protests denouncing police and military abuse.

In many ways, they are correct. The Supreme Council of the Armed Forces and the interim government cancelled the already meager quota for female representatives in parliament shortly after Mubarak stepped down. As a result, less than 2% of the representation in the People’s Assembly and the Shura Council consists of women. To add insult to injury, some of those women actually oppose the freedoms guaranteed in the Convention on the Elimination of Discrimination Against Women (CEDAW), to which Egypt is a signatory.

Sadly, the rejection of those international norms protecting women’s right to self-determination in Egypt should surprise no one. Public instances of sexual harassment and assault had increased significantly even before Mubarak’s ouster. During the revolution, reports of groups of men groping and tearing at women filtered through the media. The “virginity testing” controversy almost one year ago today illustrated the beginning of a systematic attack on women to prevent them from taking part in protests against the interim government and security forces.

Police harassment of female reporters in particular made headlines with the assault on Lara Logan, Mona al-Tahawy, and others covering the events in Tahrir throughout the past year and during the Occupy Cabinet protests in November and December. The woman stripped and beaten by military security forces received so much international attention that it shamed the SCAF into an apology to Egyptian women.

Despite legal mechanisms to address these crimes against women (though the courts have yet to convict perpetrators), a number of social factors support the regressive views. Jobs resonated with the people as one of the demands of the revolution. “Bread, freedom, and social justice,” was a call commonly heard in Tahrir and the fragile Egyptian economy since the onset of the revolution last year has accentuated the need for stable employment. Paternalistic cultural habits and an increase in conservative views over the past few decades place men at the center of economic development as the designated bread winner in families. Cultural pride and a fragile male ego would also strongly dissuade women from the economic empowerment commonly viewed as a man’s domain, and encourage the push for a woman’s role in the home over the workplace or politics.

Lastly, the xenophobic tendency most recently riled up as a result of the NGO controversy lends itself to the sense that international norms remain a Western idea unreflective of Arab or Muslim values. Many Islamist parliamentarians hold the view that institutes such as the reconstituted National Council for Women derive from the former regime and promote foreign agendas – a view that sparked a statement from the FJP calling for converting the institution to the National Council for Families.

The flaws in the Islamist reasoning – from the moral imperative to grant women the right to choose their own destiny to the need for institutions that could help achieve those rights to the political and economic benefits gained from women’s empowerment – extend beyond the scope of this discussion. Suffice it to say, the revolution has not been kind to women and the mass cultural shift, sometimes driven by a supportive government, is not forthcoming. Women’s rights activists can only hope that as the democratic transition proceeds, opportunities to assert their human rights will emerge and may lead to a more gradual shift in thinking. Egyptian women have a large mountain to climb indeed.