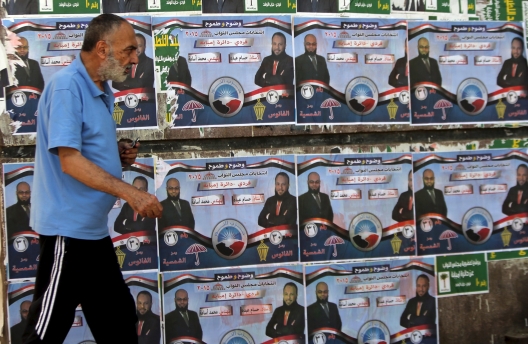 Starting October 16, Egypt will come to the end of its dragged out transitional period by holding its first parliamentary election since 2012. Heralded as the final step in Egypt’s revolutionary roadmap, this election is anything but revolutionary. Rather, it has been marked by a sense political apathy reminiscent of former president Hosni Mubarak’s reign.

To start with, there are half as many candidates running in this election as there were in 2012. Despite the fact that this will be the largest parliament Egypt has seen in decades, 5,420 individual candidates have registered to run. These numbers are similar to election figures seen in 2010—a time when political apathy toward elections was the norm.

One reason for this significant decrease is the absence of the Muslim Brotherhood, its affiliates and its allies. In 2012, the Brotherhood’s Freedom and Justice Party (FJP) fielded over 500 candidates on its own. As the dominant party in the Democratic Alliance Coalition, the FJP contested over 70 percent of the individual seats and ran in all 46 party list electorates. Meanwhile the Wasat Party, headed by former Brotherhood leadership, fielded 402 candidates.

Following the popularly-backed military ouster of Mohamed Morsi in 2013, the FJP has been dissolved, the Brotherhood declared a terrorist organization, and its members banned from participating in politics. This is not to mention the many Brotherhood leaders who have been put behind bars.

In addition, Brotherhood sympathizers such as the Wasat Party, Watan Party, and the far-right Building and Development Party have chosen to boycott the elections. Participating in the political process, they say, only gives legitimacy to a regime that came to power through illegitimate means. “The party has always been for the success of the first democratically elected president, no matter his character,” the Wasat Party wrote in a statement.

The centrist Strong Egypt Party, led by popular former Brotherhood member and presidential hopeful Abdel Moneim Aboul Fotouh, also announced last February that it would not participate in the March elections, in objection to the overall lack of democratic development under President Abdel Fattah al-Sisi. After those elections were canceled and rescheduled, Ahmed Shokry, the party’s director of political affairs reaffirmed Strong Egypt’s decision to boycott.

“Political will to establish a democratic path is nonexistent,” Shokry wrote in an official statement. “Many Egyptians have come to see democracy only being used as a means of directing the political conflict, not as a system of governance, which is why we have seen so few candidates and why we will likely see few voters.”

The Salafist Nour Party stands as an outlier, a remnant of political Islam barely allowed to run. In 2012, the Nour Party-dominated Islamic Bloc fielded 693 candidates and took 25 percent of the seats, proving themselves to be a dominant political force, second only to the FJP. Today however, amid lawsuits calling for the dissolution of religious parties, and a barrage of bad press, Nour has found itself on the defensive, seeking not dominance, but rather inclusion. The party has even reportedly expressed support for the For the Love of Egypt list in the East Delta constituency, where Seif al-Yazal’s list is running uncontested.

“We decided to shrink the number of seats we are running for first of all to deliver the right message that we are not seeking absolute dominance over the expected parliament,” Nour Party spokesman Nader Bakkar told Egypt Source.

Nour isn’t the only party that has dialed back its participation. The Socialist Popular Alliance Party, which fielded 306 candidates in 2012, is only running 11 candidates this year. While the party leadership has chosen to take part in the political process, it has been largely unsuccessful in stirring up enthusiasm among its members after security forces shot and killed party-member Shaimaa al-Sabbagh during a peaceful protest in January and charged 17 other members who witnessed the shooting with her murder. While acquitted in a first trial, the courts have accepted a retrial on the same charges.

Up until recently, the Socialist Popular Alliance had been running as a member of the Egypt Awakening Coalition together with a sprinkling of other center-left parties. The Coalition dissolved in September however, after the High Elections Committee demanded all candidates retake their costly medical exams, running just under 3,000 Egyptian pounds (around $400) each.

Egypt Awakening petitioned this requirement, arguing that candidates who had taken the medical tests in February for the previously scheduled election shouldn’t be made to pay for them again. When the administrative court ruled against them, the coalition dissolved, leaving its member parties scrambling to join other coalitions or drop out of the running for party-list seats altogether. Many of the coalition’s parties, such as the Dostour Party, has been plagued by internal strife over whether or not to participate. This sort of confusion and reshuffling has characterized this year’s elections and has certainly contributed to the dip in registered candidates.

Between bans and boycotts, that leaves seven party coalitions running this year as compared to 14 in 2012. The number of seats allocated to party lists, in this upcoming parliament is also a fraction of what it once was. In 2012, party coalitions could compete for 60 percent of all the seats, whereas this year, they can only compete for 20 percent. Five percent will be appointed by the president and the remaining 75 percent must be won individually.

Competing for individual seats is a costly and competitive affair, so those candidates who wish to do so must either have strong name recognition, backing from a big-name party, or substantial funding. While parties are compensating by fielding more independent candidates, campaign spending limits show just how costly these campaigns can be. Campaigns for individual candidates are capped at 500,000 Egyptian pounds, compared to around 160,000 Egyptian pounds per candidate in a list. These factors significantly reduce the pool of would-be candidates and will have a strong bearing on the type of parliament that will result from these elections, Dr. HA Hellyer, non-resident fellow and specialist in Arab politics at the Brookings Institute, told EgyptSource.

“The parliament will be overly representative of big business interests,” Hellyer said. “But this does not have to do with the numbers of people running as much as with the electoral law. If there were more party list seats, there would be more representation.”

As it stands however, those running come almost exclusively from high-income brackets, and will likely only pursue an economic agenda if elected, Hellyer said.

“We can’t expect to see political reform, security reform, or judicial reform,” Hellyer said. “Just economic reform, if any reform at all.”

Sisi has already hinted at his dissatisfaction with the amount of power granted to the parliament by the 2014 constitution. If it so desired, this parliament could repeal all 200+ laws passed by Sisi and his predecessor, interim president Adly Mansour, dissolve the current cabinet, and even impeach Sisi himself. The democratic fervor, however, that fueled the 2012 elections is now smoldering beneath a blanket of fear and yearning for stability.

“2012 was an outlier,” Hellyer said. “We hoped it wouldn’t be, we hoped it would become the norm, but it was. People are saying, ‘Forget this type of extensive involvement in politics. Let’s just get on with it.’”

Emily Crane Linn is a freelance journalist based in Cairo where she focuses on social justice and human rights stories in post-revolution Egypt. Follow her on Twitter at @emilycrane4