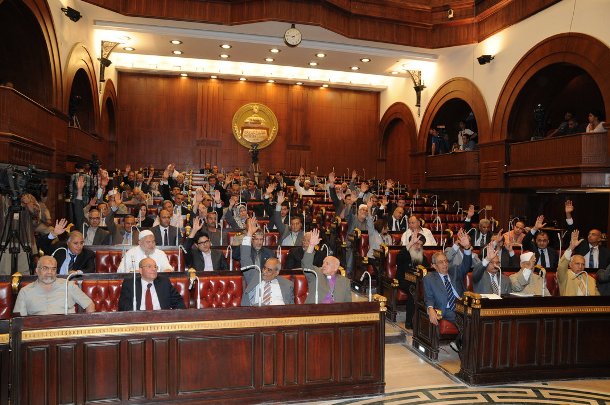 The current makeup of the Assembly is punctuated, more so by those absent from the lineup, than by those present. Prominent figures such as Dr. Mohamed El Baradei, Dr. Ahmed Zeweil and Dr. Magdi Yakoub, all of whom are internationally recognized, have been left out. The 100-member committee does include legal experts, and state institution representatives, but other less qualified members have been included. The Assembly is also lacking female representation, with only 6 women on the committee.

The Muslim Brotherhood’s Freedom and Justice Party (FJP) is protecting its own interests, at the expense of an entire nation, which is confirmed by the withdrawal of several of the secular and liberal representatives in the Assembly, including Amr Hamzawy, Adel Abdel Hamid and Maher El Beheiry.

The Assembly stated that they are not working independently, but rather will take into consideration ideas submitted to a Suggestions Committee, saying that it has received tens of thousands of suggestions. It is unclear how these can be efficiently reviewed and considered, with the speed at which they are moving. Additionally, holding meetings with individuals from civil society, human rights and minority groups, is a subjective approach to understanding the needs and opinions of the general public. The Assembly’s silence on socioeconomic rights indicates that it is not truly taking into consideration the people’s will, since socioeconomic inequality was a driving force behind the 2011 uprising.

The Court’s Role in the Constitution

In July, Morsi approved a law which granted the Constituent Assembly legal immunity from being disbanded, reinforcing the idea that he is protecting FJP interests above Egypt’s and continues to politicize the process. After a very public attempt to reconvene parliament, Morsi’s move flew slightly under the radar. The law makes the Assembly immune to any decisions made by the Administrative Court, leaving the decision entirely with Supreme Constitutional Court. Despite this, the Administrative Court continues to review the case, adding to an already shaky legal framework surrounding the writing of the constitution.

The breakneck speed at which the assembly is continuing to work at could also be an indication of an attempt to beat the looming court deadline. According to recent reports, the constitution will be completed within a week. The drafted constitution still faces an additional hurdle, as it will be reviewed by several parties, among them SCAF, according to the June 17 Constitutional Addendum.

As far as the Constituent Assembly makeup is concerned, like the selection of parliamentary members, its formation should be open to a public vote, giving Egyptians the opportunity to participate in the process. The constitutional drafting is a pillar for the country’s future, and as a result, the general public should be able to select members they feel represent their point of view. Syndicates and institutions should also be given the opportunity to nominate a certain quota, without interference from others.

Additionally, the Constituent Assembly should not be dominated by members of a now-dissolved parliament. If the Supreme Constitutional Court’s (SCC) ruling is to be observed, the percentages agreed upon by the parliament are null and void. The resignation of FJP and Nour Party Shura Council members as an attempt to pre-empt the Administrative Court’s decision about the Assembly further indicates that the that the FJP is fully aware of the legal predicament, and is trying to circumvent it.

In legal terms, the court case which will decide the fate of this Constituent Assembly should end in its dissolution. The makeup of the current constituent assembly was determined by a dissolved parliament, and as a logical consequence, the assembly itself should be considered void. Egyptian law states that anything based on a void concept or model, is itself void.

With Morsi giving the constituent body immunity, we are once again facing an entanglement of judiciary with politics. Morsi’s law adds yet another dilemma to the constitutional confusion that plagues an assembly whose fate is unclear. Legally, Morsi should withdraw the Constituent Assembly’s immunity, demonstrating his respect for the court and allowing it to have the final say, rather than bringing the SCC into the matter once again. Morsi’s parliamentary experiment ended with the court upholding its decision, and the president expressed his respect for the judiciary. That respect must extend to any decisions made regarding the Constituent Assembly.

Salem Mostafa Kamel is an Egyptian attorney based in Cairo. He majored in law at Ain Shams University and is currently pursuing a Masters degree in international and commercial law at Indiana University.