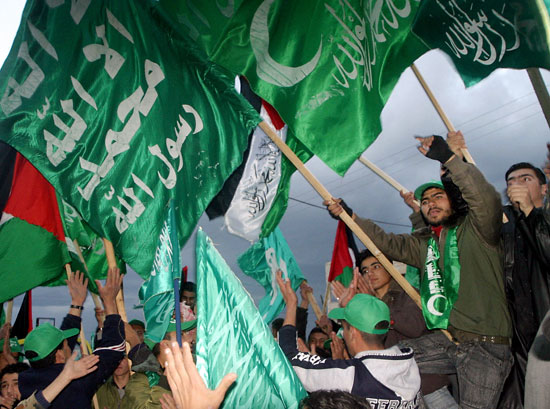 The first round of Egypt’s presidential election has set the stage for a confrontation between the 60-year old military establishment (represented by Ahmed Shafik) and the Muslim Brotherhood’s candidate Mohamed Morsi, competing for control over the post-Mubarak system. But don’t be fooled into thinking that the Muslim Brotherhood is aiming to remove the military from power. I believe that the alliance between the military and Brotherhood which began during the January uprising continues to this day, despite efforts on both sides to feign the appearance of mutual hostility.

After the January uprising, the Brotherhood aligned once again with the ruling military council to control the street, and together they converted the uprising’s momentum into a military coup. The question now is: Will the final outcome be the Brotherhood’s acceptance of military control by allowing the election to tilt in Shafik’s favor?  This scenario would allow the Brotherhood would resume its scarecrow role, frightening Egyptians into voting for another military dictator. Or alternatively, will the two parties switch places, in which case their alliance will continue along the lines of the Pakistani model?

Assuming the continuation of the alliance and common interests between the military and Islamists, voters faced with the choice between the former regime’s candidate and the Islamist candidate will lead to a repeat of the scenario that circumvented democratic demands during the first Arab spring witnessed by and in 2005 and 2006.  Islamist electoral victories – in which the Egyptian Brotherhood won 20 percent of the seats in Parliament following a deal with the Mubarak regime and Hamas won 57 percent of seats in the Palestinian Parliament – gave authoritarian regimes a pretext for scaling back democratic reforms as a counterweight to the rise of political Islam.

For two months prior to the presidential election, the Muslim Brotherhood had been showing signs of hostility toward the ruling Supreme Council of the Armed Forces (SCAF) and demanding the dismissal of Prime Minister Kamal Ganzouri and his Cabinet. This was the second time the Brotherhood had stood in the way of the SCAF, the first being its opposition to the controversial supra-constitutional principles proposed by former Prime Minister Ali al-Selmy before the parliamentary elections, which would have enshrined a special status for the military in the new constitution. But eventually the Brotherhood backed down from its opposition to the document and abandoned protests in Mohamed Mahmoud Street and outside of the Cabinet building, even going so far as to attack protesters and defend the military. Although the SCAF was angered by the Brotherhood’s overzealous victory in the parliamentary elections, the Brotherhood placated the military by passing amendments to the Military Justice Code giving the military judicial immunity and gives military courts jurisdiction over any case involving a member of the military, even if the conflict is civil in nature.

The use of the Brotherhood scarecrow has become a familiar game played by the military over and over again, but I believe the public will not be fooled as easily as in the past, and the country could witness a second mass uprising – this time against the military-Islamist coalition that has been in place. The beginnings of public unrest have been stirring since the one-year anniversary of the January uprising.

After a year and a half of manipulation of the masses and popular will and the implementation of political decisions that do not reflect the demands of the revolution, is headed toward an explosion of outrage, the sparks of which could be seen in a demonstration in on May 28 in protest of the election results. Protesters in said that the SCAF intended for the elections to result in a face-off between Morsi and Shafik to pave the way for a restoration of the former regime. Statements spread on twitter such as, “I refuse to kill the rebels” – a reference to Shafik – and “I refuse to be silent in the face of their deaths” – a reference to the Muslim Brotherhood. One protester accused the Brotherhood of contributing to the abortion of the revolution through its alliance with the military, and another said, “We will not accept either Morsi or Shafik as president."

The military hopes that the presidential election will be the final scene of the transition, but the festering revolutionary current hopes that a Shafik victory would be invalidated with charges of election fraud, a scenario that would provoke a new revolution against the military and its ally the Brotherhood.