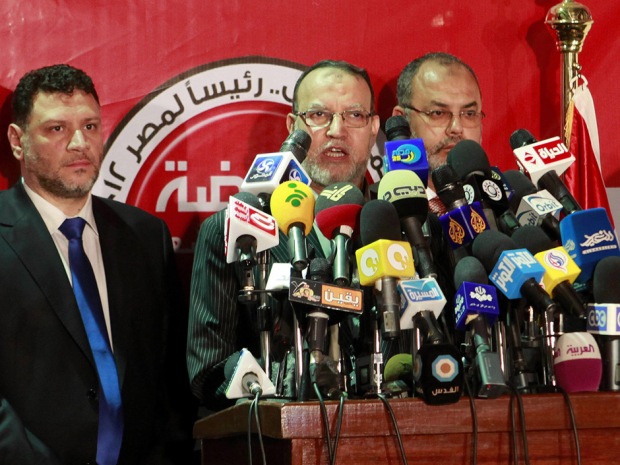 In recent weeks, the lines separating Egypt’s legal and political realm have gone from blurry to invisible. Some of the fiercest battles seen over the course of the transition have been played out in courtrooms, raising the question: Have judges replaced politicians as Egypt’s reigning power-brokers? Controversial verdicts in the trial of Hosni Mubarak and other former regime officials on June 2 brought protesters back to Tahrir Square by the thousands. Meanwhile, the Supreme Constitutional Court (SCC) is expected to issue two potentially game-changing decisions on June 14: One that could lead to the disqualification of presidential candidate Ahmed Shafiq just two days before the decisive run-off round, and another that may invalidate the results of the recent parliamentary elections.

Either outcome would upend the current electoral process and call into question the legitimacy of the transitional roadmap. With the fate of parliament and the presidential election in the hands of the SCC, another influential judicial institution — Egypt’s powerful Judges Club — has weighed in on the political turmoil with a scathing attack on the Islamist-led parliament, which some commentators have interpreted as a veiled endorsement of the military’s preferred candidate, Ahmed Shafiq. This partisan power-play by a professional association representing 8,000 judges has called into question the neutrality of an institution that bears legal responsibility for administering a free and fair presidential election.

On May 7, the head of the Judges Club, Ahmed al-Zend, accused the People’s Assembly (lower house) of "slandering" the judiciary after members of parliament (MPs) openly condemned the Cairo Criminal Court’s acquittal of six interior ministry officials and lenient sentencing of Hosni Mubarak. Al-Zend called the People’s Assembly "a thorn in the side of Egypt" and threatened to let its laws go unenforced.

Although al-Zend did not explicitly reference the Muslim Brotherhood and its political wing, the Freedom and Justice Party (FJP), his remarks were interpreted as a direct challenge to the Islamist majority. In a strikingly partisan blow, al-Zend said that judges would never have agreed to supervise the recent parliamentary elections had they known the results, and warned that 4,000 judges are prepared to boycott their constitutional obligation to oversee the upcoming presidential election. Suggesting that the judiciary will intervene in the political realm to rescue Egypt from its current state of "free-fall," al-Zend warned parliament, "From this day forward, judges will have a say in determining the future of this country and its fate. We will not leave it to you to do with it what you want."

Other members of the Judges Club have since tried to distance themselves from Judge al-Zend’s inflammatory remarks, but even if he was speaking in his personal capacity and not on behalf of the association, his statement has irrevocably tainted the neutrality of the judiciary on the eve of the most polarizing and competitive presidential election in Egypt’s history, already considered illegitimate in the eyes of many Egyptians. Thousands of voters are planning to boycott the run-off, and a loss of public confidence in the neutrality of the supervising judges — the supposed guarantors of free and fair elections– could further undermine the credibility of the results.

Judge al-Zend’s bold political stand is not unprecedented for the Judges Club, which has historically engaged in activism to protect the integrity of elections and confront the abuse of executive power. However, under Mubarak’s rule, the Judges Club had been at the vanguard of demands for democratic reform, whereas Judge al-Zend’s latest burst of political activism appears to be aimed at preempting political change — in the form of the Muslim Brotherhood — and perpetuating a status quo favorable to the military establishment and former regime. It appears that the Judges Club is taking a political stand again, only this time not against the Mubarak regime, but to prevent the Muslim Brotherhood’s candidate Mohamed Morsi from carrying out what Judge al-Zend called "a systematic plan meticulously designed to destroy this country." This is not the first time elements of the judiciary have made politically-driven decisions during the transitional period, but it is the first time a prominent judge has been accused of endorsing his preferred electoral outcome. In this case, Judge al-Zend’s harsh criticism of the FJP’s conduct in parliament came off as a de facto endorsement for Ahmed Shafiq.

The judiciary’s apparent bias toward Shafiq and the former regime he symbolizes is the logical outcome of an institutional evolution — from opposition to co-optation — that began in 2005. Under Mubarak’s rule, the Judges Club earned a reputation as an irritating watchdog, persistently confronting the regime over abuses of executive power and threats to the integrity of elections. Reformist judges repeatedly used the association as a platform to promote democratic demands: the passage of a law guaranteeing the judiciary’s financial and administrative independence from the ministry of justice, as well as changes in the electoral system requiring that electoral commissions be staffed entirely by senior judges chosen by the judiciary.

In May 2005, judges threatened to abdicate their legal obligation to monitor parliamentary elections unless the regime met their demands for electoral reform, crossing a red line that triggered a punishing backlash. Starting that year, Mubarak’s government successfully tamed the Club with a combination of threats and material incentives for loyalty to the ministry of justice, which administered salary raises and other perks meant to keep the judges in line. In the years since, the Judges Club has seen a steady influx of establishment-oriented judges who have dampened the institution’s dissident impulses. The current head of the Judges Club, Ahmed al-Zend, was elected in 2009 on a platform promising to restore the institution’s role as a defender of the integrity of the judiciary, a mission he felt had been compromised by political activism. Under al-Zend’s leadership, the Judges Club has taken on a more subdued character, functioning primarily as a social club and professional advocacy association.

But despite Judge al-Zend’s insistence that the newly submissive Judges Club had withdrawn from politics, its deliberate complacency in the final years of Mubarak’s rule could not have been more political. The Judges Club was simply acting in the interests of the regime by not acting at all. But now that the Muslim Brotherhood is threatening to overturn the status quo — represented by Ahmed Shafiq and the military establishment — the Judges Club has reactivated its political role as an ally of the former regime and bulwark against political change.

Between the Judge al-Zend’s implicit endorsement of the Supreme Council of the Armed Forces’ (SCAF’s) preferred candidate and the controversial verdicts handed down in the trials of Hosni Mubarak and former Interior Minister Habib al-Adly on June 2 (both were given appealable 25-year sentences, a disappointment to prosecutors who had demanded the death penalty), it would be reasonable to conclude that the judiciary is deep in the tank for Shafiq, the SCAF, and the interests of the former regime. However, this would be a simplistic reading of an institution that speaks with many voices.

Over the past few months, elements of the Egyptian judiciary have taken on seemingly contradictory roles: Intermittently reinforcing the SCAF’s agenda and transitional roadmap, while at other times making decisions that fundamentally challenge the legitimacy of the interim period. Far from a monolithic institution, the infrastructure of Egypt’s judiciary has been aptly described by Nathan Brown as a "maze," in which jurisdiction is divided among separate court systems dealing with constitutional questions, administrative disputes, military cases, and everything in between. Given the diversity and depth of the system, it makes sense that its component institutions have often pursued opposing interests and imperatives, when weighing in on disputes in the political realm — an area that in theory should be off-limits to the ostensibly neutral judiciary, but since the revolution has been appropriated as a platform for judicial influence over the transition.

Egypt’s judiciary has been accused repeatedly of yielding to executive interference, particularly during the controversial trial of foreign NGO employees, during which the three presiding judges allegedly lifted a travel ban on the defendants under pressure from the SCAF. This suspected manipulation of the judiciary to advance the SCAF’s agenda backfired explosively: The three judges recused themselves from the trial citing "uneasiness;" 285 judges signed a petition holding the head of the court of appeals responsible and demanding his removal; and former presidential candidate Mohamed ElBaradei called the political interference in the judicial process "a fatal strike to democracy."

But while many judicial decisions since the revolution appear to have been molded by executive pressure, at other times the courts have spontaneously seized opportunities to make game-changing political decisions at their own initiative — such as the April 10 administrative court ruling that disbanded the Islamist-dominated constituent assembly, a politically charged case that Judge Yussef Auf suggests was beyond the court’s jurisdiction. The judiciary will see another opportunity to radically alter Egypt’s political landscape on June 14, when the Supreme Constitutional Court (SCC) is expected to decide the fate of Ahmed Shafiq’s disputed candidacy — just two days before the run-off election — as well as the validity of the recent parliamentary elections.

The SCC’s decisions in these two cases will inevitably be influenced by the judiciary’s institutional interest in protecting its own legitimacy, which has been damaged by accusations of unconstitutional activism in the political arena. As Zaghloul al-Balshy, a senior judge and vice chairman of the Court of Cassation, recently said of the judiciary’s political turn, "To shove it into what does not involve it has shaken confidence in the institution." The judiciary has already been put on the defensive by widespread criticism of the verdicts in the trials of Hosni Mubarak and other former regime officials, viewed as too lenient by many Egyptians. A decision upholding Ahmed Shafiq’s candidacy — by striking down a disenfranchisement law that would bar former regime members from running for office — would take a toll on the judiciary’s already vulnerable reputation, something the SCC justices have a strong self-interest in preventing

Last week, Judge al-Zend made clear that he will protect the judiciary’s legitimacy at all costs in a stern warning to critics of the Mubarak verdict: "When you cross the line, we will break your legs." If it comes down to a choice between defending the interests of the SCAF and former regime or protecting its own reputation, the judiciary — like any self-serving political actor — will save itself.

Mara Revkin is the editor of the EgyptSource.