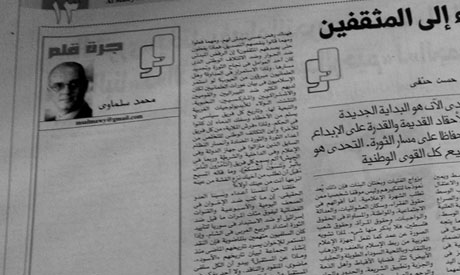 On Wednesday, the Upper House of Parliament (Shura Council) named 50 new editors for the country’s state-run newspapers, amid a backlash, led primarily by the Journalist’s Syndicate. The union accused the Muslim Brotherhood-dominated Shura Council of trying to regulate state-owned media in the interest of their party, earning a comparison to Hosni Mubarak and the National Democratic Party’s (NDP) stranglehold on the press.

The appointments also come shortly after President Mohamed Morsi named a Freedom and Justice Party (FJP) member, Salah Abdel-Maqsoud, as his new Minister of Information. The announcement dashed the slim hope that the archaic propaganda ministry would be abolished, one of the many unfulfilled demands of the January 2011 uprising. The latest moves highlight a concern that the FJP aims to take control of state media outlets, put an end to unfavorable reports about their officials and instead ensure a press more sympathetic to the dominant party.

The Shura Council’s ownership of state media makes press freedom a near impossibility in Egypt, placing too much power in the hands of one dominant party. As a result, the Journalists’ Syndicate is calling for the Shura Council to relinquish its ownership, including its responsibility to appoint state media editors.

Abdel Nasser Salama is among the named editors and will be heading up the leading state newspaper, Al Ahram. Salama is known for often taking a critical stance in his weekly column. When writing about the 2011 protests which led to the ouster of Hosni Mubarak, he toed the state media line, saying that the protesters were paid thugs.He was also suspended in 2010 for writing inflammatory articles against Egypt’s Christian minority. Gamal Abdel Raheem, named editor in chief of Al Gohmhureya, was accused of inciting sectarian strife against Egypt’s Baha’i minority in 2009.

In response to the appointments, the Syndicate has called for a partial strike. Egypt’s journalists are turning to a method of defiance which is becoming increasingly common when protesting a press clampdown – and that is to simply leave their op-ed columns blank. In the first call of its kind directed at the Muslim Brotherhood, Gamal Fahmy, the secretary general of the Journalists’ Syndicate filled the blank space in his al-Tahrir newspaper column, with just one sentence explaining his stance: "This space is blank to protest the hereditary system that did not fall with the ousting of Mubarak and his son. It seems that the Muslim Brotherhood is trying to revive it after it was blinded by arrogance. This protest is against their control of the public owned media.” In addition to calling on print journalists to leave their columns empty, the Journalists’ Syndicate is also encouraging satellite channels to suspend their broadcast for five minutes on Thursday.

These appointments don’t come as a surprise. In early July, the Shura Council, headed by FJP member Ahmed Fahmi, formed a 14-member committee to receive applications for the posts. Soon after, two of the four journalists on the committee resigned, sensing that the choices were limited to applicants with Islamist leanings. The Journalists’ Syndicate also voiced its concern in June, when seven Syndicate board members withdrew from discussions with the Shura Council, also accusing them of attempting to dominate the selection. The Muslim Brotherhood’s apparent attempt to monopolize the media has been met with mounting criticism and the latest appointments reinforce the idea that the FJP is unwittingly emulating Hosni Mubarak’s now defunct NDP.

For his part, Abdel Maqsoud denied allegations that he aims to turn state media into the Muslim Brotherhood mouthpiece, and said he is working towards a free press, one which represents the country and the people.

One of his first decisions as minister was to ban state-run media from broadcasting comments made by Israeli analysts. His decision comes in the wake of state-run Nile News using comments made by an Israeli commentator in its coverage of the Sinai attacks which left 16 soldiers dead and 7 injured.

The draft constitution has also not been spared. The draft article on press freedom prohibits the imprisonment of journalists charged with so-called ‘publishing crimes’, and ‘censorship or administrative banning of the media with some exceptions in a time of war.’ A cause for concern, however, is the fact that the Assembly made no mention of the judiciary, and so banning and censorship could still take place by way of Egypt’s courts.

The FJP is happily inheriting the very tools used against them during Mubarak’s 30 year reign. As long as the Shura Council retains ownership of state media, government newspapers have little hope of being more than a mouthpiece for the party with the most seats. Press freedom cannot exist within the confines of a system that long served Mubarak’s dictatorship. If real press freedom is to be attained, Egypt must experience a complete overhaul of its press and media system, one which does not serve the purposes of just one political party.

Nancy Messieh is associate director at the Atlantic Council’s Rafik Hariri Center for the Middle East and editor of EgyptSource .