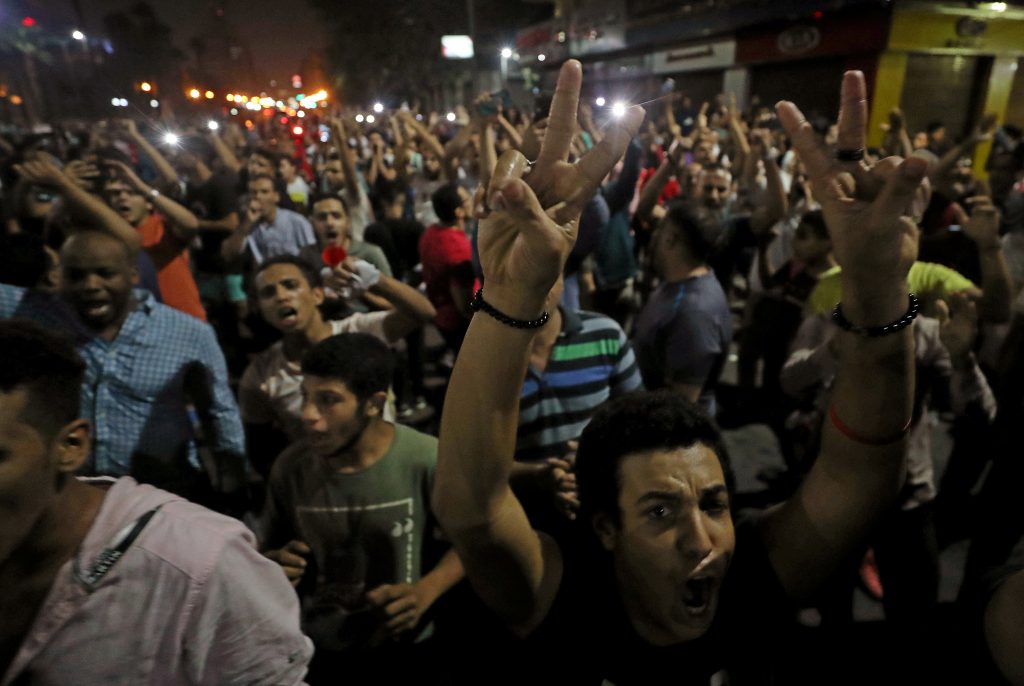 Egypt seems to be getting back to normal after a number of demonstrations against President Abdel Fattah al-Sisi that began on September 20. This may be the consequence of the zero-tolerance approach pursued by the government. In over three weeks of protests, local authorities arrested almost 3,000 people, and imposed a curfew in all major Egyptian cities. While limited in numbers, the demonstrators took to the streets to protest the regime and the weakness of the Egyptian political system: increasing corruption, draconian repression, and economic instability. All these factors have created more than a few embarrassments for the powerful elite, which has tightened its already heavy control of dissidents.

The unexpected demonstrations were triggered by videos published online by Mohamed Ali, a former contractor with the Egyptian Ministry of Defence self-exiled in Spain, who accused Sisi and his inner circle of widespread use of public funds for luxury investments and illicit business. The reports of corruption are a sore spot for the Egyptian system with clientelist networks playing a central role both in politics and the economy. The president himself is the first in line to tackle corruption. In June, he inaugurated the first African Anti-Corruption Forum held in Sharm el-Sheikh and stated that “Egypt has come a long way in the past years in the fight against corruption.” In recent years, a number of high-ranking officials have been sentenced on corruption-related charges and forced to leave their positions. But actually, not all the cases pass through the hands of the Administrative Control Authority (ACA), the body responsible for fighting corruption in Egypt and what emerges now might put into question the president’s power.

However, the protests have also shown that stability in Egypt should not be taken for granted and that the economy plays a fundamental role. In fact, Egypt’s economy is gradually developing at the macro-economic level. The country’s GDP has risen by 5.5 percent, with inflation declining to 11.3 percent, and the currency’s purchasing power has increased to its highest rate in the last five years. Nevertheless, the Egyptian people have not benefited from this positive trend and have grown increasingly frustrated in recent years due to government-imposed austerity measures, cutbacks in the subsidy system—accounting for some 10 percent of the annual national budget—and currency devaluation (the Egyptian pound devalued by 32.3 percent and continues to lose value). In fact, according to the Central Agency for Public Mobilization and Statistics (CAPMAS), 32.5 percent of the population lives below the poverty line. These measures have produced anger, frustration, and discontent among broad sections of the population, which could lead to the emergence of protests coming from the most disadvantaged classes.

Other waves of protests could create serious consequences for the economic sector and for political stability.

In this context, the most important role is played by the military, which represents the only political, social, and economic source of legitimacy in the country. Thus, any changes in government can be technically possible only if there is a coincidence of interests between the president and the Egyptian army. That inextricable dependence became even more evident after the success of the constitutional referendum in April, which gave the Egyptian military the role of sole guarantor of the constitution and the state. Moreover, the military has strengthened its role in the domestic agenda, seeking a proactive leadership in the socio-economic transformations of the state and preserving its economic interests (unofficially, Egypt’s military enterprises may account for up to 20-60 percent of total national GDP; 3 percent of GDP according to official available data).

In light of this scenario, one might question whether the Egyptian political system is about to collapse. Can the military tip the balance? Certainly, there is irritation among some of the factions of the regime as well as conflicts of interest: among the Egyptian Armed Forces (EAF) the protests were viewed with concern because their allegations undermine the historic and heroic image of the military in the popular imagination. As always, however, the military wishes to avoid the return of protests, political and economic chaos, as well as a change at the top, which could also challenge their interests. However, the military elite continues to have economic ties with the president and to be protected and maintained in their positions by Sisi.

In order to strengthen this power system, it is possible that Sisi will continue the reshuffle initiated a few months ago within the army, bureaucracy, and intelligence services in order to intensify his control of state institutions. The appointment of representatives who are part of Sisi’s inner circle may intend to prevent the risk of regime change, but in the long term it could fuel the latent anger of the population towards the authoritarian policies of the president. In this context, it is clear that the fight against corruption requires more than the arrest of a few officials, and should also concern the military’s role in the economy. One should not forget that the self-enrichment of a corrupt coterie of business cronies linked with former Egyptian President Hosni Mubarak is what caused the ouster of his regime in 2011.

Thus, the current protests in Egypt are an alarm bell that the authorities should not underestimate. Other waves of protests could create serious consequences for the economic sector and for political stability. This is the main challenge for the president, but it is also an important testing ground for the resilience of this peculiar stratocratic system.

Alessia Melcangi is an assistant professor of contemporary history of North Africa and Middle East, as well as globalization and international relations at the Sapienza University of Rome. Follow her on Twitter: @AlessiaMelcangi.

Giuseppe Dentice is a PhD candidate in institutions and politics at the Catholic University of Milan. He is also an associate research fellow at the Italian Institute for International Political Studies (ISPI). Follow him on Twitter: @GiuseppeDentice.