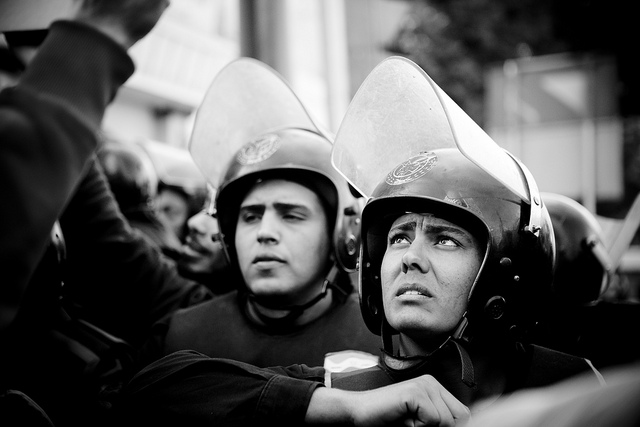 A long-brewing battle within Egypt’s ministry of interior has culminated into a potentially indefinite countrywide strike by police officers. The build up to this massive breakdown in the command and control structure inside the government’s primary security apparatus began as a few scattered protests across the different governorates of Egypt. Some of the police conscripts voiced outrage at inadequate pay; others protested the ministry’s unwillingness to reinstate bearded policemen – dismissed for refusing to abide by the traditional policy of remaining clean shaven – despite an administrative court ruling in their favor; and yet others demand arms and better equipment to control the streets. The call that resonated the most among the officers, however, entails protesting the perceived injustice of President Mohammed Morsi’s use of the police as political pawns in Egypt’s current power struggle.

The Morsi administration has had to play a difficult balancing act, playing negotiator between the different branches of the deep-state Egyptian government (over which Morsi exercises limited control) and meeting demands for justice and accountability from opposition groups and revolutionary forces. Mounting streets protests that include everyone from political activists to the Ultras soccer fans repeatedly condemn the inability of the Egyptian justice system to prosecute security officials for excessive use of force and torture. Morsi has already had to replace the minister of interior once since the beginning of his term in office. Further changes seem afoot as news of a new director for the Central Security Forces and a replacement of the head of the Port Said Security Directorate emerged over the past two days.

The civil unrest over the past week in Port Said, particularly, has magnified the tension between the police and ordinary Egyptians who see the officers as enforcers and protector of whomever is in power. Political protests against Morsi in the canal cities region since the imposition of the state of emergency, and the subsequent deaths and injuries resulting from clashes between protesters and security forces, has strengthened that perception.

The trial of suspects in the “Port Said Massacre” that resulted in death sentences sparked outrage by hardcore Port Said soccer fans, leading to attacks on police stations and the deaths of a few officers and further fueling the breakdown of law and order on all sides. Many officers involved in the recent protests, fed up with their association with a government that most do not support, have since abandoned their posts and joined calls for the downfall of the Muslim Brotherhood. The Port Said Directorate was abandoned, forcing the Egyptian army to intervene to protect government assets. With the impending sentence of the remaining suspects in the trial scheduled for March 9, the momentum for the outbreak of violence seems unstoppable.

Other signs, however, point to an attempt at containing the rapidly escalating tension. Death sentences in Egypt requires a judge to obtain the recommendation of Azhar’s Grand Mufti, and newly elected Grand Mufti Shawky Allam said he could not submit his decision. He recommended the criminal court either postpone the verdict in the Port Said case or issue a sentence without the Mufti’s recommendation. The court has also decided to limit attendance to lawyers and state media to prevent, and the defendants in the case were moved for security reasons. (Despite the effort, today’s verdict upheld the death sentences for 21 defendants.)

The deteriorating situation, and potentially the largest police strike since 1986, add to an already heightened anxiety over Egypt’s fragile transition. Army intervention in Port Said arises against a backdrop of limited but increasing calls for the military’s return to power. With the experience of the Supreme Council of the Armed Forces (SCAF) still fresh in his mind, it seems highly unlikely that the head of Egypt’s military, General Abdul Fattah al-Sisi, would be eager to take on a political role. But neither would he want the streets to devolve into complete chaos. With the parliamentary elections timetable set back considerably by the administrative court’s ruling on the elections, an army takeover would take Egypt back to square one in its transition – an option few would support. Given this context, it seems reasonable that Sisi would pressure Morsi into conceding to at least some of the demands of striking police officers. The changing leadership in parts of the security apparatus and a possible replacement of the minister of interior may seem disruptive, but a small price to pay for both Morsi and Sisi compared to the alternative scenario.

The roots of this crisis, however, remain in Morsi’s inability and apparent unwillingness to tackle the bureaucratic monster that is the interior ministry. His repeated statements praising the police during times of crisis, his administration’s promise to provide arms, and denial of torture claims show a preference to co-opt the system before any attempt to reform it. But that remains only part of the picture. Morsi and his Islamist allies’ political majoritarianism has polarized the country to the point of violence. The ministry itself recognizes the need for a political solution to Egypt’s current crisis to help fix its security woes.

Despite the potentially massive security vacuum that a police withdrawal portends, the police strike offers a unique opportunity for more than just cosmetic changes to the ministry of interior. Morsi, rather than relying on a policy of appeasement and containment, must take this opportunity to evaluate options for systemic restructuring of the security apparatus. Morsi must stop betting on the pre-existing Mubarak-era dynamic to support his administration and start relying on the aspirations of the revolutionaries for a just, balanced, structure that balances liberty with security.