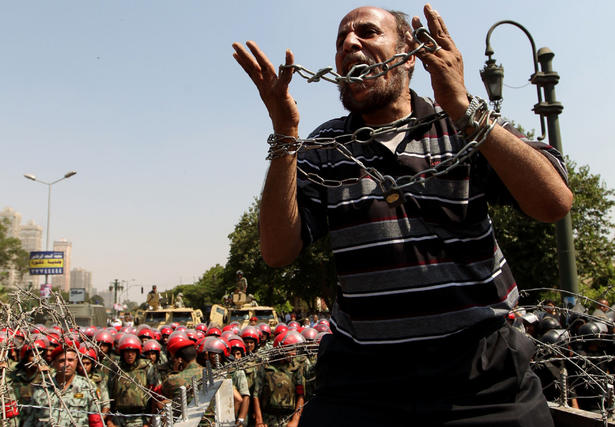 The SCAF’s decision to issue a new Constitutional Declaration on June 17 confirms what human rights activists have suspected all along: The SCAF scored political points by allowing the Emergency Law to expire as scheduled on May 31, but has since been covertly building a legal foundation to justify martial law and subject citizens to arbitrary detention without due process.  The first indication of the SCAF’s intent to resurrect a de facto state of emergency outside of the now-defunct Emergency Law was a ministerial decree issued on June 13 that gave military police and state security officers sweeping powers to arrest and detain civilians and prosecute them in military courts. The timing of the Ministry of Justice decree  — just days before the controversial supreme court rulings on June 16 (which dissolved Parliament and upheld Ahmed Shafik’s presidential candidacy) as well as the presidential election, two events that had the potential to provoke mass demonstrations and violence – was widely recognized as a desperate, SCAF-sponsored attempt to preempt unrest with the reenactment of martial law.

The decree was by no means an empty threat. MP Zeyad al-Elemy is in danger of prosecution for calling Field Marshal Tantawi a “donkey,” while several activists were arrested outside of polling stations on June 16 and 17 for allegedly distributing water and holing protesters of martyrs killed during the uprising.

As if the Ministry of Justice decree and new constitutional declaration weren’t enough to guarantee a de facto state of emergency, the SCAF is making another move to consolidate control over defense policy with a proposed “national defense council” that will include a few civilians – the president, the prime minister and defense minister – but will be dominated by military officers. According to a leaked decree outlining the new body, its decisions would be made by majority vote, thus granting the military veto power over the civilian government in matters of national defense. (The SCAF has already assumed the right to veto presidential declarations of war in its latest constitutional declaration).

Egyptian human rights groups have already taken a strong stand against the Ministry of Justice decree. 17 organizations have signed a petition demanding its repeal. Meanwhile, the SCAF continues to downplay fears that a military coup is in progress, insisting that “everyone is blowing this out of proportion.” But as Mohamed Morsy and Ahmed Shafik each claim victory in the presidential election, it’s clear that the real winner is the SCAF and the biggest losers are the Egyptian people – who will be living with the undemocratic consequences of martial law and military justice for months if not years to come.

Salem Mostafa Kamel is an Egyptian attorney based in Cairo.