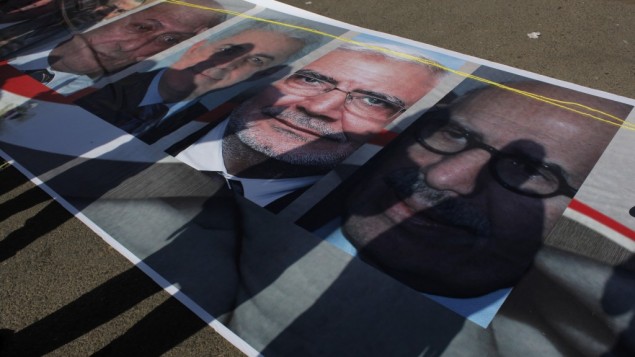 The word “transition” implies both an origin and a destination, yet Egypt’s transitional period is still circling around a dead-end.  The Supreme Council of the Armed Forces (SCAF) has proven incompetent in leading the interim period, except in matters affecting the military. A bigger problem is that none of the other civil political forces in Egypt has yet managed to fill the power vacuum left by Mubarak. Meanwhile, a wave of legal turmoil is shaking up an already volatile political scene. The past weeks have witnessed several controversial decisions and court rulings on a wide range of issues from suspending the constituent assembly to banning 10 presidential candidates and approving a ‘Disenfranchisement Law’ That bars former Mubarak officials from public office.

In the midst of these recent legal developments, the Ministry of Insurance and Social Solidarity (MoISS) issued a contentious decision – on April 23 – denying registration requests for eight American civil society organizations. The Egyptian government claims that the “activities of these NGOs violate Egypt’s sovereignty.” Among these groups are the human rights and election monitoring Carter Center, the development group Coptic Orphans, and the youth-based conflict resolution organization Seeds of Peace. Despite claims made by the Egyptian government, these organizations assert they did not receive any official notices or charges to date. Most of these NGOs, including the ones put on trial last February, have been operating in Egypt for years and their activities were widely known and tracked by the Egyptian authorities. Among these well-established and legitimate organizations is the Carter Center, which was invited last year to “witness” Egypt’s Parliamentary elections. The Egyptian government’s decision to deny the application of an NGO that has been invited by the same government just a few months ago to observe the first post-Mubarak parliamentary elections is both inconsistent and irrational.

This unfortunate decision is reminiscent of the NGOs crackdown last December, which resulted in civil society groups being charged with operating and receiving money illegally in a politically motivated trial that has now been postponed until June 5. The MoISS decision issued one month ahead of the upcoming Presidential election is another blow to democracy, and signals to the international community that Egypt’s interim leaders are no more committed to transparency and human rights than their authoritarian predecessor.

On the same day that the eight American NGOs were denied registration, the Supreme Presidential Elections Committee (SPEC) issued the regulations for local as well as foreign NGOs planning to witness the Presidential elections. Unlike the regulations for the Parliamentary elections, foreign groups will now need to be registered in Egypt and file the names of their individual observers, which cannot include any Egyptian nationals, to a special committee comprised of representatives from the SPEC as well as the ministries of Interior, Foreign Affairs, and National Security. This special committee will evaluate the applications and make recommendations to the SPEC, which will issue final decisions on the registration of international observers. However, the electoral commission also reserves the right to invite any organization it deems appropriate, even if it is not registered in Egypt, to observe the elections. It’s important to highlight that the SPEC’s decisions are immune against appeals according to article 28 of the 2011 Constitutional Declaration. This article defines the SPEC’s decisions as final and authoritative, which is an infringement on the constitutional right to due process.

The next couple of weeks will witness crucial decisions that will impact the duration of the transitional period and shape the character of Egypt’s next elected government. Rumors are circulating that the Presidential elections may even be postponed over legal challenges to certain electoral procedures. The Parliament’s vote to reject the Cabinet’s management plan and withdraw confidence from the government represents a challenge in the relationship between the SCAF and Parliament. Furthermore, we should not forget the much anticipated ruling on May 6 that will determine the constitutionality of the Parliamentary Law. If the legality of the parliamentary elections is successfully challenged, it could bring about dramatic consequences and possibly necessitate the dissolution of Parliament. A political shake-up of this magnitude could further  aggravate Egypt’s ailing economy and delay the military’s transfer of power to civilians beyond the June 30 deadline — leading to a chaotic state of affairs that will not be favorable for any Egyptian whether in power or on the streets.