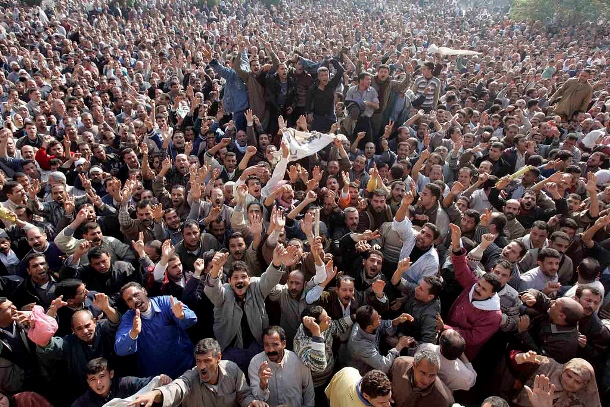 In 2008, workers at Ghazl El-Mahalla, the biggest textile company in Egypt, placed their fellow countrymen on the path to revolution, igniting the first wave of significant protests against former President Hosni Mubarak’s regime. At the time, they were protesting low wages, inflation and corruption in the company’s higher echelons. Taking to the street, they shocked Egyptians when, for the first time, they very publicly ripped down a picture of Mubarak. A few years later, millions of Egyptians succeeded in bringing down countless more posters as well as Mubarak’s regime itself. The 2011 uprising was punctuated with one slogan: “Bread1, freedom, social justice.”

Over a year and a half has passed since that uprising, and the workers in Mahalla have found themselves in a situation similar to the one they rose up against, if not worse. A complete absence of social justice has renewed the worker uprising, where basic survival could become a driving force, eventually leading to a second, ‘genuine’ revolution, fueled not by demands for freedom and democracy, but by poverty, hunger and need.

The Mahalla workers have not been alone in their protests. Strikes have rocked Egypt, from MOPCO workers in Damietta, to an open-ended sit-in, in the shadow of the presidential palace in Cairo. Workers from the Suez-based Cleopatra Company for Ceramics and workers in the textile industry nationwide have also participated in strikes. All of these protests share one cause: the appalling conditions workers face in both private sector and governmental factories.

In Mahalla, home to more than 50,000 workers and an epicenter in Egypt’s industrial sector, the sense of injustice and oppression is evident. Equally evident is the general apathy that the country has towards the constant struggle these workers face, living with measly wages, a lack of any sort of healthcare, and paltry retirement sums.

Two weeks ago, the Mahalla workers launched a new strike, demanding an increase in profit sharing, a fixed minimum wage, and an increase in end of service remuneration from one to three months. They also called for a purging of the ‘corrupt’ management levels in the company, and the implementation of an organizational restructuring of the company. These demands all fall under the cloak of ‘social justice’, which protesters around the country demanded during the January 25 Revolution. They are also the same demands which have been heard in the past few weeks from over 30,000 workers in seven other private sector and government textile companies in the Delta.

Some journalists, writing from a distance in Cairo, have attributed these protests to counter-revolutionary forces, determined to undermine the newly elected president, Mohamed Morsi. It quickly becomes obvious, upon speaking to workers in Mahalla, that this is not the case. One worker said, “We are here for the sake of our children’s future. Our present, and future, is buried here, next to our machines.” He had a message for Cairo: “Please tell the journalists, the media and the politicians that we do not belong to any political forces. We are just seeking our rights."

In the past 18 months, Egypt has witnessed sit-ins and strikes across the country, many of which have ended with the acceptance of demands for improved working conditions, and improved wages. An increasing bitterness is visible in Mahalla, as these workers continue to be ignored, feeling abandoned by the uprising they were integral to starting. A sense that others have reaped the benefits of the revolution pervaded the Mahalla strikes.

Seven days into their strike, after largely being ignored by both the administration and government, a presidential adviser met with a delegation of Mahalla workers. The adviser asked them to suspend their strike, and wait for the formation of the new government, which would then look into their demands. He also promised a moderate increase in profit-shares. The meeting did little to dissipate the anger of the workers, who at the time said that nothing has changed for the better.

The new regime has done nothing to address administrative and financial corruption in these companies, and has not replaced any of its managerial staff, many of whom receive significant salaries, along with hundreds of thousands of Egyptian Pounds in profits. Some have even been promoted, including the Ghazl El-Mahalla chairman, who was forced out of his previous job over corruption charges.

Hamdi Hussein, a leading member in the labor movement in Mahalla, believes that worker demands in Egypt are quite simple, and are rooted in two main issues: fair minimum wages and union rights, the latter of which should be incorporated into the new constitution. Hussein says, "Egypt’s workers are being crushed under the pressure of extremely hard living conditions and can no longer tolerate being ignored by the government. As their anger continues to grow, due to the government’s disregard for any sort of social justice, they are becoming a time bomb that could blow up at any moment."

1 Translator’s note: Bread or ‘aish in Arabic can both mean living and bread. The translator has chosen the latter but the connection between the two meanings is clear.