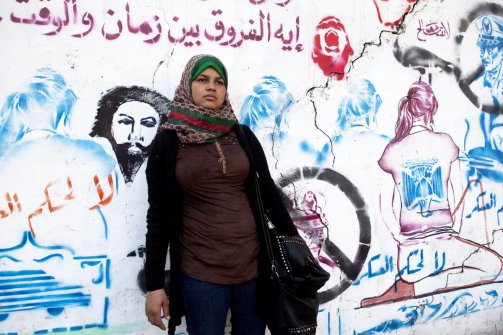 The Egyptian Initiative for Personal Rights (EIPR) and INTERIGHTS have launched a case against Egypt in regard to the now infamously known ‘Virgnity Tests’ case in which Egyptian activist Samira Ibrahim accused military personnel of sexual abuse during her detention in military prison. The case, which is being brought before the African Commission on Human and People’s Rights, “alleges violations of the African Charter, to which Egypt is a signatory.”

In March 2012, Ibrahim’s case against Dr. Ahmed Adel al-Mogui ended with a not-guilty verdict for the doctor, almost a year after Ibrahim was detained. She accused the military doctor of conducting a forced examination to determine whether or not she and 18 other detainees were virgins. The army initially denied any knowledge of the incident or practice, but later General Abdel Fatah al-Sisi, who is now Egypt’s Minister of Defense and head of SCAF, admitted to the practice, justifying it as a necessity to protect military officers from accusations of rape.

An Egyptian court has since banned the practice, but the verdict in Ibrahim’s case was yet another blow in a long series of events in which the country’s judiciary has provided little or no accountability for crimes committed during both the 18-day uprising and SCAF’s handling of the transitional period.

EIPR has launched the case on behalf of Ibrahim, as well as Rasha Abdel-Rahman and Gehan Mahmoud, who decided to bring their case to local human rights groups. Speaking about the case, EIPR’s Bahaa Ezz al-Arab, said: “Military courts lack the necessary independence to provide effective redress in cases like this. As a result, military personnel continue to be unaccountable for violations against civilians.”

EIPR and INTERIGHTS’ statement adds: “In their letter to the Commission, EIPR and INTERIGHTS have asked it to advocate that Egypt prosecutes all perpetrators involved in this incident in civilian courts. The NGOs will ask the Commission to recommend reforms to Egypt’s Code of Military Justice, so that incidents where the military are alleged to have abused civilians will be heard in a civilian court.”

The African Commission is expected to consider the request in October in the Ivory Coast, and in the event that it is accepted, further testimony will be submitted.