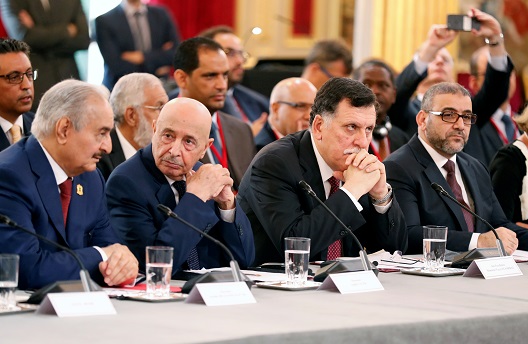 The idea of holding presidential and legislative elections in Libya by the end of 2018 continues to gain traction, since it was first proposed in late October 2017. A tentative agreement to hold elections on December 10 was reached at a conference held on May 29 in Paris, attended by the main Libyan political figures: the Presidency Council’s Chairman Fayez al Sarraj, the Speaker of the House of Representatives Aghila Saleh, the President of the High State Council Khaled al Mishri, and the Commander of the Libyan National Army, Khalifa Haftar. The international community was also present with delegations from most European and regional stakeholders.

Lacking in this agreement are any specific details on how to overcome the obstacles for holding elections. Many sensible, rational, and fundamentally correct objections have been raised by members of the press, regional experts, and NGOs. The main objections center on the impossibility of holding free and fair elections in Libya’s unstable security environment. They also note the non-viability of electing institutional structures without the legal framework defined by a constitution, and point to the difficulties of staging an effective electoral campaign in a fragmented environment and with a barely functioning media.

Those who propose to hold a referendum on the draft constitution, approved by the Libyan Constitution Drafting Assembly in July 2017, in reality do so only in order to delay elections or any other solution to the instability. They are also likely attempting to gain time in a situation in which, while disastrous for the population at large, is favorable to the many who are illicitly profiting from the widespread corruption and lack of legal and judicial oversight. The time necessary to organize a referendum and in case of (probable) rejection by the people, its return to the constituent assembly for its revision, and then a second referendum, makes this option impractical at this particularly sensitive moment.

Objections raised against holding elections are met with the simple answer from its proponents that there is no alternative that could produce better results. The argument to be made for holding elections is that they will, hopefully, produce a legitimate parliament—thus allowing the disbandment of the House of Representatives (HoR) and the advisory body, the High State Council (HSC)—and create a clean slate. It would also elect a president to represent the country and oversee the working of the various institutions. It is a lackluster reply indeed and one that leaves much to be desired, but so far it is unbeatable because of the presumed lack of alternatives.

Is it really so? If more attention to the situation is paid, it becomes apparent that an alternative exists; one that has already been proposed by the Secretary General Special Representative Ghassan Salame but abandoned at the first difficulty. The plan, initially proposed by the UN mediator in September 2017, foresaw the modification of the Libyan Political Agreement to allow for the creation of a smaller and more effective Presidential Council and the realization of a technocratic government to undertake the difficult tasks of bringing order and security. At the same time, the plan would restart the economy and provide much-needed services that the Libyan population was accustomed to receiving until just a few years ago. When the two committees—from the HoR and HSC—failed to find an agreement within the two weeks allocated, the plan was de facto abandoned and the road to elections, previously excluded, was opened. Too little effort was employed and the idea was discarded too quickly.

The alternative to elections could well be represented by a temporary executive body entirely or mostly formed of technocrats. This executive body could operate under an agreement between the HoR and the HSC and act to realize further agreements on various important steps dealing with economic and social reforms, political gridlock at the national and local levels, and security sector reform. A Presidential Council formed by the actual president, Serraj and the heads of the two chambers Saleh and al Mishri would oversee this technocratic government, in this way continuing to allow political leaders an important space. The government would be charged with the realization of fundamental objectives that would in turn be essential for the holding of free and fair elections.

These objectives are wide in scope. The unification of the country is the most cumbersome task but an essential precursor to all other objectives in Libya. Today, de facto, the East and West are separated and the South is almost inaccessible and isolated. Uniting the regions by way of an agreement will be an important step forward for establishing security and restarting the economy. Disarmament and stricter border security could be implemented in order to reduce not only the terrorist phenomenon but also crime and criminal activities in general, which have become increasingly threatening. Improving and kick-starting the currently shuttered economy will happen also through the unification of main institutions such as the Central Bank, the National Oil Company, the Libyan Investment Authority, which are now doubled in Tripoli and Benghazi.

This option, if pursued, allows time to resolve thorny issues. It also opens the space to involve large strata of the population in the building of institutions and their strengthening through the provision of services and the creation of work opportunities. The US government should be more involved in the situation in Libya and not due to generically defined humanitarian principles, but because Libya matters from a substantial point of view. Instability is spreading throughout the region and may easily spill-over into the territories of US allies such as Egypt and Algeria. Effects on European states cannot be excluded. Criminality has become extremely widespread and violent. Terrorist organizations such as the Islamic State are enjoying a resurgence within Libya by taking advantage of the lack of order and stability. It is evident that the lawlessness of the country affects the international arena and thus the superpower cannot or should not abstain from its governance.