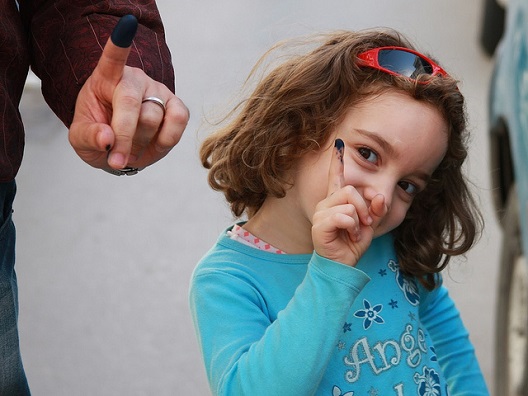 In 2011, a Tunisian voter’s pride rubs off on his daughter as they celebrate what Tunisians hope will be the first of many free and fair elections. (Photo: Flickr/Freedom House)

The National Constituent Assembly (NCA) adopted an organic law on elections on May 1, marking the next step in Tunisia’s transition to democracy and clearing the way for presidential and parliamentary elections in the fall. Adoption of the law was a necessary next step in Tunisia’s political transition after the passage of the new constitution January 2014. Whereas the constitution outlined the powers of the president and parliament, the electoral law has determined the system by which these representatives will be chosen.

The law, which required a two-thirds majority, passed easily with over 80 percent of members present voting in favor. Work now turns to the independent elections commission, the Instance Supérieure Indépendante Pour Les Elections (the High Elections Committee, ISIE), to prepare the elections and recommend a date for the elections to take place. Shafik Sarsar, chair of the ISIE, said that elections would likely take place on either November 16 or 23. The ISIE has much work to do before then, including the management candidate and voter registration, publication of the electoral calendar, voter education, and training of thousands of electoral staff.

International and Tunisian legal experts are still reviewing the text of the law, but it appears to contain provisions that will guarantee the credibility of the elections in reflecting the will of the voters. The law protects universal and equal suffrage, observation and transparency, and equality in campaigning. The elections commission is nonpartisan, and voters can dispute balloting through courts. In this way, the electoral law is a departure from that of the former regime.

The law, however, falls short of hopes that it would ensure gender parity in the membership of the parliament, despite Article 46 of the constitution’s requirement that the state work “to attain parity between men and women in elected assemblies.” The new electoral law requires that party lists alternate between men and women (vertical zipper), but does not require parties to place women at the top of the list (horizontal zipper). The same requirement was applied in the 2011 elections, and yet only 20 percent of NCA members are women. Article 167 of the draft law, which would have excluded members of the former regime and ruling party, was also controversial and was voted down by the NCA, signaling that the next parliament will take up questions of lustration.

The 2011 electoral law is the model for the electoral system, and while some points are yet to be clarified, little deviation is expected. In 2011, there were twenty-seven domestic constituencies with an average district magnitude (seats per district) of six. The electoral formula, the mathematical calculation of assigning votes to seats, will not change. Furthermore, there will be no national threshold (share of seats required nationwide), a fairly common safeguard against extremist parties in proportional electoral systems. The NCA rejected a district-level threshold of three percent in plenary.

All of these features of the electoral system make it difficult for large parties to dominate the vote. Smaller parties will not be excluded in a national threshold, and large district magnitudes increase the number of seats that smaller parties might win. Furthermore, it is well known in Tunisia that a different electoral formula would have resulted in an overwhelming majority of for Ennahdha, the Islamic party, in the 2011 elections; with one change of the formula, Ennahdha could have won 150 seats instead of 87. Despite these disadvantages to Ennahdha, the party did not push for a change to the electoral system. Repetition of the 2011 electoral system makes it virtually impossible that one party will win a majority of seats, which almost certainly will lead to a governing coalition.

The membership of that governing coalition is unclear. The main challenge to Ennahdha is Nidaa Tunis, a party inspired by the French secular politics of former president Habib Bourguiba. The party’s founder and president, eighty-seven year-old Beji Caid Essebsi, is a former cabinet minister and parliament speaker under Bourguiba and Zine El Abidine Ben Ali. But the party has a broader appeal than just former regime apparatchiks, and is quickly becoming an umbrella group for other secular voters. Polls remain inconclusive, but Nidaa Tunis edges out Ennahdha in most of those conducted (over 60 percent of voters are undecided). The question after the elections will likely be whether Nidaa Tunis and Ennahdha can form a governing coalition, or forced to entice smaller parties to join a coalition that excludes the other.

The field of presidential candidates is murky. Essebsi has announced that he will run for the presidency. Incumbent president, Moncef Marzouki, is at least considering a run despite his dwindling base of support. Tunisians are preparing for a showdown between an Islamic and a secular candidate, with fresh memory of Egypt’s 2012 presidential elections. Ennahdha has not yet decided who or whether they will run a candidate.

The adoption of the electoral law has launched Tunisia’s electoral cycle, which will run at least into the fall, through party campaigns and the election of a parliament and president. The transitional phase is nearing its end, with a new constitutional and political order in sight.