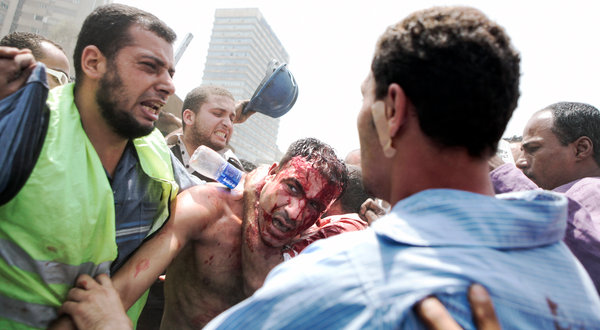 At least eleven people were killed and nearly two hundred people were injured during violent clashes after armed thugs allegedly allied attacked a sit-in by supporters of disqualified Salafi presidential candidate Hazem Saleh Abu Ismail with tear gas and Molotov cocktails near the Defense Ministry building in Cairo’s Abbasiya neighborhood early on May 2, prompting several presidential candidates to announce the suspension of their campaigns.

2) Political forces led by the Freedom and Justice Party are calling for a million-man demonstration on Friday, May 4 to condemn violence against protesters in Abbasiya on May 2 and demand a transfer of power to civilian without delay. [al-Shorouk, Arabic, 5/2/2012]

3) Seven parties including the FJP, Wafd, Nour, and Ghad al-Thawra plan to boycott a meeting scheduled with the SCAF for May 2 to protest attacks on an Abbasseya demonstration that have left at least eleven dead. Heads of the boycotting parties said the SCAF’s invitation for a meeting was vague and did not include an agenda of topics to be discussed. [Egypt Independent, English, 5/2/2012]

4) SCAF Chief of Staff Sami Anan announced that the military is now considering handing over power to the next president on May 24, if a candidate wins in the first round and voting does not go to a run-off. [al-Shorouk, Arabic, 5/2/2012]

5) Mohamed Morsi, the Muslim Brotherhood’s candidate, announced that his campaign would be suspended for two days, “in solidarity with the protesters, and in opposition to the killing and the bloodshed.” Morsi warned the SCAF against using the violence as an excuse to delay the elections, which are set to begin with a first round of voting later this month. “The elections have to take place at their scheduled time,” he said. Rival Islamist candidate Abdel Moneim Aboul Fotouh has also suspended his campaign for an unspecified period of time. [New York Times, English, 5/2/2012]

6) State media is reporting contradictory information on the possibility of a Cabinet reshuffle prompted by tensions between the parliamentary majority and the SCAF. And Al-Gomhuria, a state-run daily, reported on May 1 that a reshuffle would occur, but only in a few ministries, including the Foreign Ministry. However, two ministers, Mohammed Attiya and Fayza Aboul Naga, have since denied this report. [al-Ahram, English, 5/2/2012]

7) Saudi Ambassador to Egypt Ahmed al-Qattan is expected to return to Cairo on Saturday, following a diplomatic crisis over the detention of an Egyptian human rights lawyer in the kingdom. Mass protests broke out outside the Saudi Embassy in Cairo last week after protesters learned that Egyptian lawyer Ahmed al-Gizawy had been detained by Saudi authorities, who allege he brought drugs into the country. The Saudi embassy is expected to resume its work next week. [Egypt Independent, English, 5/2/2012] [al-Masry al-Youm, Arabic, 5/2/2012]

8) Mohamed ElBaradei’s newly launched Constitution Party, aimed at unifying Egypt’s disjointed revolutionary forces, has been met with skepticism by some liberals due to the ambiguity of its agenda. ElBaradei has stated that the party has no ideology or platform other than uniting all moderate Egyptians. [Egypt Independent, English, 5/2/2012]

9) IMF Director of the Middle East and Central Asia Masood Ahmed said on May 2 that more work needs to be done before the IMF can sign a $3.2 billion loan with Egypt, raising the possibility that an agreement will not be reached by May 15, the date previously given by Finance Minister Momtaz El-Saieed. Asked whether he thought there was enough domestic political support for the program, Ahmed said: "I think that process [of getting political support] is advancing but I do not think we are at the point yet where we could move forward. "There’s still more work to be done to close down those three areas," Ahmed said, referring to the economic program, political support and alternative financial sources. [Bloomberg, English, 5/2/2012]