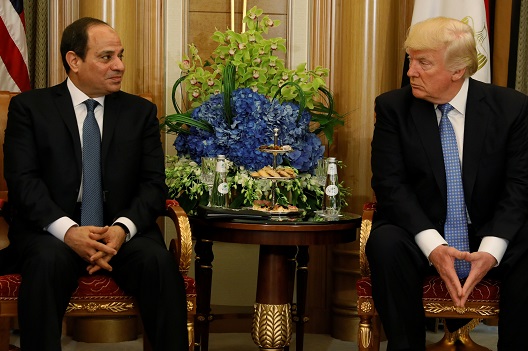 August is usually a quiet month in the DC Beltway. Of course, that has not been the case at all this year, with President Donald Trump’s comments over Charlottesville and the aftermath; the crisis with North Korea; Pakistan and Afghanistan; and yet others. On Tuesday, another issue was thrown into the mix, though far less crucial in the grander scheme of American democracy and international relations. Reuters released a story that indicated the United States has decided to deny 95.7 million dollars in aid, and delay a further 195 million. Within twenty-four hours, the story had the makings of a full blown diplomatic crisis between Cairo and DC. The Egyptian foreign ministry issued a stern statement insisting that Egypt’s economic and security challenges were not being taken seriously enough—and it is still only Wednesday.

Why did this happen, and how did this happen? Those would be the questions analysts would ask—but they presume a certain rhyme and reason, and a particular consistency, in the policy being analyzed. In other words, they assume the existence of not only a functioning administration in Washington DC, but an existing and operative policy in international relations. These are normal assumptions, but if the past seven months ought to have taught the Beltway anything, it should be that normal assumptions do not apply.

The Trump administration has been in office for seven months, and its international policy doctrine is still unknown. Senior positions in the State Department remain unfilled. Many sensitive ambassadorial posts overseas are left without an occupant. And all this at a time when crisis after crisis is taking place. The dysfunctionality of Trump’s overall administration—which we have seen with resignation after resignation—has an effect in a broad variety of areas, including foreign policy.

Trump has made no secret of his support, for example, of the Egyptian leader, Abdel Fattah El-Sisi. Numerous international and Egyptian human rights organizations have published report after report with immense concerns about the track record of Sisi’s government; Republican and Democrat politicians have expressed the same tone; and none of that has meant anything to the Trump administration. On the contrary, sign after sign has been given to show that the Trump administration has little by way of criticism for how Cairo operates domestically or within the region.

It would be dubious to think that this perception has changed overnight. Trump’s overall stance on human rights, whether in terms of promotion as a part of policy, or as a basic element in relations with states overseas, has not changed. That is to say, it is not important. One might argue it should be—indeed, the upholding of fundamental freedoms and rights ought to be a crucial staple in any civilized state, whether in terms of their own citizens, or in how they deal with states elsewhere—but that does not obviate reality on the Trump ground. (One could argue this has a much longer history than Trump, but that is another story.)

What does this episode—which has yet to fully unfold and be concluded—actually show? In DC, there is a large swell of analysis that Cairo’s policies when it comes to the human rights file are not particularly healthy. Some of this is still felt within the State Department, particularly among the non-political apparatchiks. The Secretary of State, Rex Tillerson, has not exhibited a large degree of concern, nevertheless, whether it comes to Egypt or other countries in the region. Every so often, something does come up—but it is a blip in the relationship. This decision on aid is one such blip; a note about religious freedom in Saudi Arabia, for example, is another. Neither defines the relationship with either country.

When it is asked what does define the relationship, the answers are rather erratic—because that is the nature of this administration in DC. There is no over-arching ‘Egypt policy’ any more than there is an over-arching policy in international affairs for pretty much any country. There are hints—such as the ‘America First’ notion, but even that can be interpreted in a variety of ways, and has been interpreted as such in mutually different fashions over the last seven months. Foreign military financing (FMF) for Egypt has been maintained, even though there was talk of cutting it early on due to a slew of highly aggressive statements about Islamists from various parts of the administration, not proscriping the Muslim Brotherhood as a foreign terrorist organization; the continued major military exercises between the US and Egypt, Bright Star, is reinstated, while economic aid is reduced—and so forth.

Does that mean Cairo has nothing to worry about? On the contrary. Trump’s erratic nature means that at any given point, a genuine concern about a particular issue—in this case, concerns about the NGO law which has been exceedingly controversial in human rights circles—may be allowed to develop into having policy ramifications. This is particularly the case when it does not have an immediate and direct impact on security or military operations, in a way that the Pentagon might agree is problematic. Internationally, the administration has already said, as the US ambassador to the United Nations declared, that it is ‘taking names’—in other words, that there will be repercussions for whatever it deems as transgressions, as a friend and colleague put it. Cairo reportedly assured DC the NGO law would not be put into effect—and senior officials in Trump’s administration were unimpressed when, despite the assurance, it was indeed put into effect. Moreover, denying the aid could also be in line with another trend in the Trump administration: cutting down State Department and USAID.

Having said that: Trump is many things, neither predictable nor consistent is one of them. And critics of Cairo ought to also note: in this case, the security waiver was indeed used, and the funds are still accessible at a later date. On Wednesday, while some assumed that Trump’s advisor and son-in-law, Jared Kushner, had his meeting with Egyptian Foreign Minister Sameh Shukri cancelled as a result of a brewing diplomatic crisis, this turned out not to be the case. The meeting was indeed cancelled, but apparently for relations unrelated to the aid issue—and was quickly rescheduled. At no point was Kushner’s meeting with Sisi cancelled, and he met with him later on Wednesday. Relations between Cairo and DC, even with the incredible dysfunctionality that exists, haven’t suddenly become less secure as a result of this incident—at least, not till now. But indeed—erratic is the only thing that is consistent for this White House.