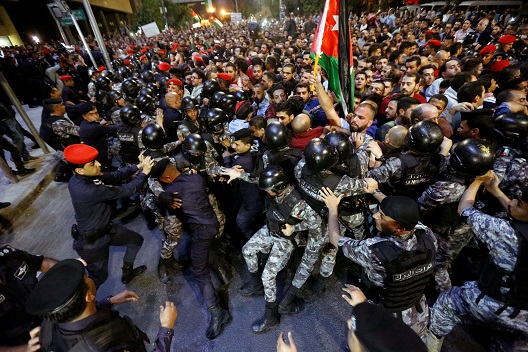 Jordan, a key Western ally and major recipient of US aid, has recently experienced its largest protests since 2012. The ongoing protests began in May as a direct response to the new tax bill backed by the International Monetary Fund (IMF), which increases tax brackets, widens the tax base, and penalizes tax evaders. The IMF is pushing Jordan to enact austerity measures and address its ongoing economic crisis in an effort to lower public debt and reduce public sector financing needs. Jordan faces ongoing challenges in securing energy supply and foreign investment, requiring significant IMF assistance since the Arab Spring.

The bill includes many controversial measures, such as increasing sales taxes on previously exempted products and lifting subsidies that benefitted lower and middle class citizens. Critics and protesters argue that these measures unfairly target these vulnerable groups, and in turn directed their public outrage at the government and economic institutions.

This recent escalation is part of a larger socio-political trend impacting Jordan since the Arab Spring. The chief concerns of Jordanian citizens during the Arab spring were youth unemployment, a weak economy, and the perception of widespread corruption among the ruling elite. The introduction of the Syrian refugee crisis exacerbated these existing issues, providing the basis for the current protests.

Though the Syrian refugee influx was not a root cause of the country’s economic conditions, refugees have heavily strained the economy. According to the UN Refugee Agency, Jordan has been severely affected by the Syrian civil war. In fact, it has “the second highest share of refugees compared to its population in the world, 89 refugees per 1,000 inhabitants.” Over 1.2 million Syrian migrants settled in Jordan in 2016, costing the country an estimated $2.5 billion. The crisis further amplified Jordan’s systemic economic problems.

Currently, Jordan has a debt-to-GDP ratio of 94 percent. As part of its $723 million three-year line of credit from the IMF brokered in 2016, the country’s leaders have made attempts to enact economic reforms to reduce debt by 2022. Jordan’s King Abdullah II, who has the ultimate authority on policy decisions, has promised change. However, he has given no specifics on possible reforms.

Jordan has backed down on reforms in the past, fearing social backlash. Governments repeatedly delayed the increase in bread prices and tax changes until Prime Minister Hani Mulki took office in 2016. With price rises, many are worried about the erosion in living standards. “This government is leading the country to total chaos,” school tutor Hanadi Dweik told NPR. “They keep adding more taxes while we have no services…Enough is enough.”

May 30- Union leaders called for a strike in response to the introduction of the controversial tax bill. The strike gained traction online via social media activists using the hashtag, معناش# (#WeHaveNoMoney). The government introduced additional fuel and electricity hikes that same day.

May 31- Demonstrations began in Jordan’s capital city, Amman. Protesters marched outside Mulki’s office at night, chanting, “We are here until we bring the downfall of the bill…This government is shameful.” Their chief concerns were price hikes on fuel and electricity, the recent removal of bread subsidies, and the introduction of the new tax bill.

A new Prime Minister in Jordan hasn’t stopped the kingdom’s largest protests in years as thousands take to the streets https://t.co/SDUMeg7RiG via @ReutersTV pic.twitter.com/hoZW6BfWR2

June 1- King Abdullah II froze the price hikes on fuel and electricity. Despite this measure, demonstrations continued with newfound calls for the resignation of Prime Minister Mulki.

June 3- Protests continued for the third consecutive night. Demonstrators accused politicians of squandering public funds and corruption. Dissatisfaction with the tax hike and other failed economic policies shifts to demands for a more accountable political system. Police fired tear gas and blocked roads to prevent protesters from reaching the cabinet office. Despite this continuing instability, Mulki refused to withdraw the tax bill, stating that its fate lay with the parliament.

June 4- King Abdullah demanded Mulki’s resignation. Accordingly, Mulki met with the King at the Husseiniyeh Palace to submit his resignation.

June 5- King Abdullah appointed Omar al-Razzaz to form a new government. Mr. Razzaz is seen as a leading reformer. He is a Harvard-educated economist who previously served as Jordan’s education minister. Mr. Razzaz is an opponent of free-market policies that disadvantage the poor and is inclined to gradually enact policy change. His appointment is said to send a “positive message to foreign donors that Jordan will continue with a tough three-year IMF plan of reforms to reduce spiraling public debt.” In Mr. Razzaz’s appointment letter, King Abdullah called on the government to review the country’s tax system and introduce a new tax bill. He suggested that the bill be written with the cooperation of parliament, unions, and other groups.

June 5- Demonstrators vowed to continue the protests to demand a different governmental and economic approach. They said the appointment of new officials was not enough to fix the economic crisis, and called for the implementation of deeper policy changes. A major theme of the protests is that the government should be placing economic burdens on corporations that have the means to pay these increasingly heavy taxes. A young lawyer on the ground, Hussain Smadi told Al Jazeera, “Day by day, the number of people in the streets are doubling.”

June 6- To show solidarity with the government, labor unions called for a one-week break from the labor strike. This angered protesters, who began demonstrating outside union offices. Subsequently, labor unions relented and agreed to continue the strike.