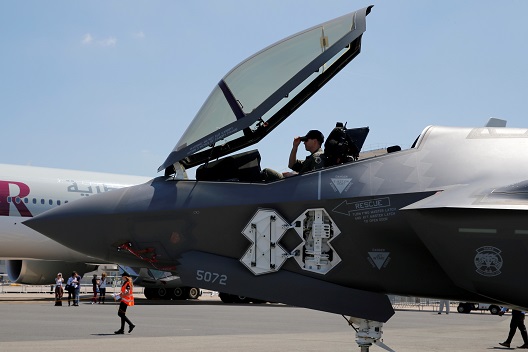 The F-35 is the next generation fighter jet designed to ensure NATO’s air superiority for the next twenty to thirty years. The F-35 Joint Strike Fighter development program is a nine-country international consortium, which includes a tiered system of states that collectively contributed to the aircraft’s development and manufacture. Turkey is a Level III partner, meaning it invested an initial $125 million in the program. This investment affords Turkey a program office staff member in the F-35 office, but also means that Turkey has no direct vote on the F-35’s basic engineering and mission requirements. Ankara has invested $1.25 billion in the program since 2002, and Turkey manufactures several key components of the F-35. Despite these investments, Turkey’s future involvement in the F-35 program is no longer certain.

As US-Turkey relations have reached a new low—US sanctions and tariffs have caused the Turkish lira to slump, and Turkey has implemented retaliatory tariffs worth $266.5 million—US lawmakers are threatening to sideline Turkey from F-35 production. Lawmakers included language in the National Defense Authorization Act (NDAA), the US military’s spending authorization bill, asking the Department of Defense (DoD) to draft a report on how to replace Turkish-made F-35 components. The report must be written within ninety days of the NDAA’s enactment. Until then, F-35 aircrafts cannot be flown to Turkey, but the training of Turkish pilots will continue.

The bipartisan congressional effort to prevent the transfer of F-35s to Turkey is driven by two issues. The first is Turkey’s arrest and detention of American citizens and consular staff; the NDAA explicitly names Pastor Andrew Brunson and Serkan Golge. The second is Turkey’s acquisition of the Russian-made S-400 missile defense system. US lawmakers are concerned that Ankara’s purchase of the S-400 will allow Moscow to exploit radar data to better identify the F-35. According to Atlantic Council’s Resident Senior Fellow, Aaron Stein, “The Russian made surface-to-air missile system poses a unique threat to American aircraft: the S-400’s radar is able to act as a platform to collect electronic and signal intelligence from the F-35.”

The recently signed NDAA 2019 on August 13 now mandates a report on Turkey’s participation in the F-35 program and potential steps to replace Turkish-made parts. Obviously, this could further disrupt Turkey’s economy. Currently, ten Turkish companies support the development and production of the F-35. Ayesas is the sole supplier for the F-35s missile remote interface unit and cockpit display. Kale Aerospace supports the Canadian company Heroux Devtek as the sole supplier for landing gear uplock assemblies. Turkey is set to provide “deep maintenance” and engine repair for F-35 aircraft based in Europe.

The NDAA also criticizes Turkey for the unlawful detention of US citizens, including Andrew Brunson. Following Turkey’s failed coup in 2016, Brunson was detained by Turkish authorities and charged with “membership in an armed organization.” Brunson’s detainment is a flashpoint in US-Turkey relations. Despite intensive diplomatic efforts, Turkey rejected US appeals to secure Brunson’s freedom. On June 25, Brunson was moved to house arrest.

US President Donald Trump and Vice President Mike Pence continue to push for Brunson’s immediate release. On August 1, the Trump administration imposed sanctions on Turkey’s Justice Minister and Interior Minister for their roles in Brunson’s detainment. The officials were sanctioned under the Global Magnitsky Human Rights Accountability Act, which punishes foreign individuals and entities guilty of human rights abuses.

The bilateral tensions may soon get worse. Senate appropriators have also secured an amendment to the Fiscal Year 2019 State, Foreign Operations, and Related Programs Appropriations Act. US Senator Chris Van Hollen’s F-35 amendment prohibits using funds to transfer, or facilitate the transfer of, the F-35 to Turkey “until the Secretary of State certifies…that the Government of Turkey is not purchasing the S-400 missile defense system from Russia and will not accept the delivery of such system.” Unlike the NDAA, this amendment would immediately block funding for the transfer of F-35 until DoD can certify that Turkey will not receive the S-400. Thus far, Ankara has shown no indication that it will forgo the S-400 purchase.

Taken together, the proposed FY 2019 F-35 amendment and the language in the current NDAA have raised doubts about the Turkish Air Force’s future fighter fleet. To date, Lockheed Martin has delivered two F-35s, and the aircraft will remain at Luke Air Force Base in Phoenix, Arizona for one to two years. During this time, Turkish pilots will train at the base, which is home to the F-35 international program.  Turkish maintainers are also at Eglin Air Force Base in Florida for training.

The F-35’s future remains uncertain. As reported by Pentagon spokesman Army Col. Rob Manning, “The U.S. government has not made a determination on Turkey’s future participation in the F-35 Joint Strike Fighter program.” In large part, the decision will depend on Turkey’s purchase of the S-400. Despite facing sharp condemnation, Turkey may choose to move forward with the S-400 purchase, endangering future deliveries of the F-35. If Turkey purchases the S-400, the United States will need to take preventative action to prevent Turkey from acquiring or operating the F-35.

Rachel Rossi is an intern at the Rafik Hariri Center for the Middle East at the Atlantic Council.

Image: Photo: A U.S. soldier adjusts his cap in the cockpit as a Lockheed Martin F-35 Lightning II aircraft is moved on the eve of the 52nd Paris Air Show at Le Bourget Airport near Paris, France June 18, 2017. REUTERS/Pascal Rossignol/File Photo TPX IMAGES OF THE DAY