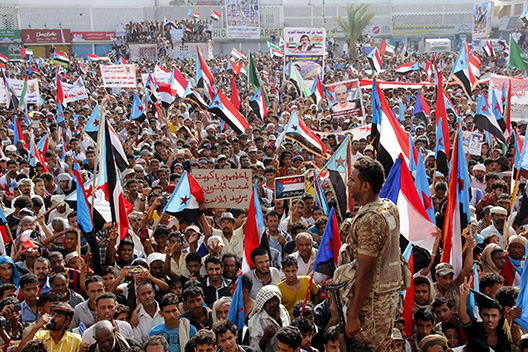 On April 21, a third round of Yemen peace talks started in Kuwait, but with little hope that they will achieve a breakthrough to end the devastating eighteen-month long war in the country. Delegates from President Hadi Abd Rabbo Mansour’s Yemeni government based in exile in Riyadh and the alliance of Houthis and former president Ali Abdullah Saleh’s party attended two previous United Nations-sponsored talks in Switzerland in June and December 2015, but both rounds failed to lead to any positive results or the de-escalation of fighting. This time around negotiations have already stumbled several times due to major disagreements between both parties, and on May 1, Yemeni government officials said they were suspending the talks after Houthis took over a military base north of Sanaa.

The Limits of the Kuwait Talks

Several factors may have brought the warring parties to the negotiation table for the third time since the conflict began in September 2014.  There has been little to no progress on the battlefield since the liberation of Aden from Houthis in July 2015. Whatever progress was made was short-lived, with Hadi’s government failing to reestablish its presence and address security issues on the ground in areas where coalition backed forces have driven Houthis out. Direct negotiations between Saudis and the Houthis that took place in Riyadh in March are also indicative of a shift in the Saudi position, as they may be realizing the shortcomings of a military solution in Yemen. Those talks led to an exchange of prisoners, helping ease tension on the Saudi-Yemeni border, and encouraged Houthis to attend the Kuwait negotiations, according to their spokesperson.

The political will and commitment of parties represented in Kuwait is, however, questionable. While they came to the negotiation table, they appear to have done so reluctantly. The Houthi and Saleh delegation came late to the negotiations, which started three days later than originally planned, and both sides have withdrawn from the talks multiple times. This has led many to believe the talks are simply the result of regional and international pressure, rather than a genuine interest to end the conflict.

Both sides represented in Kuwait continue to adopt hardline positions. The Houthi/Saleh delegation wants to start a political track by forming a coalition government and address disputed political issues on the constitution and state structure, before addressing security issues. While they demand a complete halt of air strikes, they continue their ground offensive in several areas in the country, including their latest assault on the military base north of Sanaa. The Hadi government delegation, which views Houthis and Saleh’s forces as outlawed militia, continues to insist on the implementation of UNSC decision 2216, starting with the militias’ withdrawal from cities, and the handover of heavy arms to the state—the state being represented by the internationally recognized government based in Riyadh.

Many key actors have been left out of each set of negotiations, and out of the UN-backed peace process in general. The talks have involved only a small subset of the critical stakeholders, without taking into account Yemen’s complex local dynamics. Even if the talks were to succeed, any deal reached would not likely hold on the ground due to the exclusion of other local actors.

Local forces fighting the Houthis/Saleh alliance in areas like Taiz, Mareb, Albaidha, and the South are often mistakenly labeled in the media as pro-Hadi forces. Yet many of these groups are fighting for local causes and because of local grievances including historic marginalization and unfair distribution of resources. The current delegates to the peace talks, Hadi’s government included, represent the traditional elite that systematically and with impunity hijacked the state and marginalized the rest of the country for the past several decades. It includes representatives from the Saleh’s party and Hadi’s government, both of which have a strong track record in corruption. While Houthis might not be part of the traditional elite, they have come to be perceived as such—especially in the South and other areas where there is active resistance against them such as Mareb, Taiz and Albaidha—because of their alliance with Saleh, the fact that they come from the traditionally dominant North, and their attempted expansion by force across the country.

As preparations were underway for the talks, tens of thousands of Southerners descended on Aden, the city they’ve come to call the capital of an independent “South Arabia,” to demand self-determination and the right to secede. Hadi’s government has very little presence, if any, in the South, which is under the control of a mixture of local authorities, Southern resistance forces, secessionists, and extremist groups. “It is Southern local authorities and local resistance who represent the people not Hadi’s government,” said Ahmed Assaleh, Spokesperson of the Southern Youth Forum in the United States, a group which works directly with the Southern leadership in Yemen. “Failing to involve them in the Kuwait talks will lead to disastrous consequences,” he told MENASource.

In the province of Mareb, where local resistance forces have been fighting Houthis for over a year, based on conversations with residents, it would appear they doubt the peace talks will have a positive outcome, or end what they believe to be the systematic marginalization of their governorate, the home of most of Yemen’s oil and all gas. “We’re not going to abide by any agreements that won’t serve Mareb or give us a say in the decision-making,” Ahmed Ashulaif, one of the local resistance leaders in the Serwah district in Mareb told MENASource via phone from Yemen. He is among those disappointed over exclusion from the talks. “Why do they choose us as partners in war but fail to engage us in peace efforts?” he asked, referring to Hadi’s government.

In Taiz—home to 32 percent of Yemen’s internally displaced persons (IDPs) due to a brutal siege, intense shelling, and fierce battles between Houthis and the local resistance over the past year—many don’t believe in the talks at all. “These negotiations are a waste of time and will only give the murderers an opportunity to recharge in order to kill more Taizis,” said Latifa Ali, a Taizi journalist and activist who lost a brother and nephew in the fight against the Houthis in Taiz during the war. “The only way to end this is armed resistance,” she said via phone.

The Kuwait talks are already stumbling because of the divergent agendas and interests of those around the table. If the regional and international community rushes to support a settlement that reflects the interests only of those present, the talks will likely result in the past mistakes of the transitional process. The deeply flawed 2011 transition deal brokered by the Gulf Cooperation Council (GCC), and backed by the UN and the international community, resulted in a power-sharing arrangement between the former ruling party and the opposition coalition. It granted former president Saleh immunity and reshuffled, rather than forced out, former regime elements who then continued their monopoly over power and resources. The National Dialogue Conference (NDC), where 565 delegates representing different political and civil society actors came together to discuss reconciliation efforts, was widely criticized for being elite driven. As a result, the corruption, political marginalization, and longstanding grievances that gave rise to the 2011 uprising remained largely unaddressed. Consequently, governance, security and economic conditions deteriorated rapidly and the transition process failed, leading to the escalation of violence in September 2014.

The UN and the international community can continue to put pressure on the warring parties in Kuwait to establish a ceasefire and an initial agreement on a solution, but it is also critical to acknowledge the limitations of the talks in their current state. Factionalization in post-2011 Yemen is a reality, and any band-aid solutions to end the conflict will only reinforce previous patterns of exclusion and marginalization. If the UN, the Saudis, and the international community engage local actors including governors, security officials, and key resistance leaders in the talks, this will likely help ease local tensions and strengthen governance, improve security, and promote peacebuilding efforts in the immediate and long run.

Nadwa Al-Dawsari is a Yemeni Conflict Specialist and Nonresident Senior Fellow with Project on Middle East Democracy (POMED). Follow her on Twitter: @ndawsari

Image: Supporters of the separatist Southern Movement demonstrate to demand the secession of south Yemen, in the southern port city of Aden April 18, 2016. (Reuters/Fawaz Salman)