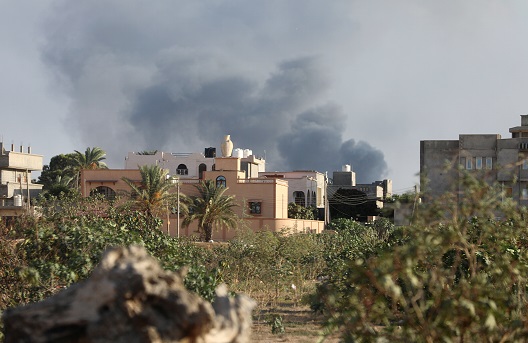 On the night of September 2nd, most of the personnel from the Italian embassy in Libya—the only operating embassy—were quickly evacuated on a ship bound for Malta. Only a handful of diplomats remained to ensure minimum efficiency. The fate was the same for most of ENI’s technicians, the Italian oil giant that has been active in Libya for decades and one of the few remaining private companies in Libya after 2011. These are clear indications of the increased perception of danger that members of the international community felt after the clashes that have occured in the Libyan capital after August 27th when a militia from the city of Tarhouna launched an attack against the cartel of militias that control Tripoli in order to assure for itself a controlling position in the city.

All of this transpired while the attention of most observers of Libya’s unfolding situation has been fixated, for the last few months, on the evolution of the electoral saga. That is, the endless and aimless debate on the feasibility of holding elections, legislative and presidential, in the month of December 2018. This date was announced in late May in Paris after a meeting between Fayez el Serraj, the head of the internationally-recognized Presidential Council in Tripoli, and the strong man of the eastern province Field Marshal Khalifa Haftar. The meeting was sponsored by the French President Emmanuel Macron, who assumed upon himself the task of mediating a solution to the Libyan crisis. By designating a precise date of December 10th, 2018 for the holding of legislative elections in Libya, the French intended to engage rivals and encourage the population towards this important step. In reality, the announcement did the opposite: the precipitation of a military confrontation that has been kept unnaturally quiet for a long time.

It can no longer be denied that Libya is the theater of a proxy war between international and regional actors. And despite the UN ban on arms in Libya, foreign powers have armed their supported factions in every possible way. This in advance of a final definitive military confrontation to overtake the country.

The recent attack by the 7th Brigade, a militia from Tarhuna—a city located fifty miles to the South of Tripoli—could easily be the beginning of this final episode of the Libyan story. Beginning on August 27th, the Brigade, led by Abdel Rahim Al Kani, launched an offensive against the militia cartel that controls Tripoli. The official reason for such an attack is to remove the corrupt groups who, thanks to their occupation of the capital, are illegally profiting from the exploitation of Libya’s monetary reserves and national resources. In other words, a fight to “clean” the country from a gang of profiteers that are impoverishing the country and starving its people. This is maybe true, but it is more likely that Al Kani and his men simply had enough of being marginalized from this revenue stream and wanted their portion of illegal profiteering.

It is difficult to filter through the many declarations of politicians and military leaders, as well as the many rumors on the ground, to truly understand what forces are playing a role and on which side. A Misrata Brigade, led by Salah Badi, a revolutionary of the First Hour—one of the original leaders of the revolution of 2011—, is rumored to be siding with the Brigade hailing from Tarhuna, but even this is not confirmed. Militias from Zintan have also moved back into the city, with some reoccupying their pre-2014 headquarters in the building of the Islamic Call Society in Tripoli.

It is clear that Macron and those who supported the setting of a definitive date for elections at the May 2018 meeting in Paris did not realize that they were putting what little stability exists in Libya at risk. International actors relied too heavily on domestic political leaders with no real power on the ground. This control belongs to the militias, their leaders, and the interests they have come to hold. It is evident that the militias are the first of the many problems of Libya’s post-Gadhafi transition.

Because of its complexity and sensitivity, the idea of disarming armed groups and creating a national security force was pushed aside in favor of a policy of appeasing the militias, which has proven to be much less effective. It is not possible anymore to continue to do so with militias dominating the security and financial resources of the country. No peace can be achieved in a country where there are at least twenty million weapons to the six million inhabitants. As the situation stand today, a disarmament, demobilization, and reintegration (DDR) program is impossible.

The intermingling of foreign countries such as Egypt, the UAE, Turkey, Qatar, France, and Italy, is one of the main reasons why Libya precipitated into such a crisis. This behavior is still undergoing and causing much damage. Therefore, the solution to the civil war should be pursued outside of Libya among foreign powers that continue to influence the Libyan conflict by sponsoring one or the other of the militias on the ground in order to pursue their own interests.

The battle for Libyan salvation is to be fought in the foreign capitals since only by shielding Libya from the interferences of foreign actors can a Libyan solution possibly be achieved even in the short term. This should be the task of the UN Secretary General and of those heads of state who honestly seek a peaceful solution to the Libyan conflict and who are ready to act in favor of stabilizing the country. For their part, the Libyan actors have to act in order to find a formula that guarantees the legitimate demands of some militia leaders and at the same time dissipates their fears of being marginalized in case a process of reconciliation is enacted. There is no other way to save Libya from falling into complete chaos than addressing the militia issue in a direct and effective way.

Federica Saini Fasanotti is a nonresident fellow in the Center for 21st Century Security and Intelligence of the Foreign Policy program at The Brookings Institution.