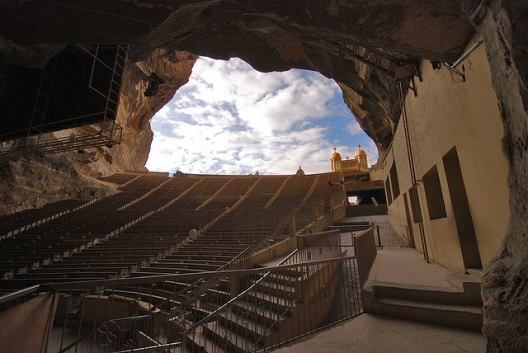 A video posted this week on Facebook appears to show Egyptian pop singer Ihab Tawfiq singing the now-popular pro-army anthem “Teslam al-Ayadi” in a Coptic church, reportedly in France. This comes as the latest of many examples of the Coptic Church participating in Egypt’s political scene in a way some see as unacceptable. While the Church’s participation in a number of political events in the past was hailed as a sign of social solidarity, its recent deeper forays into a heavily divided political has been criticized. The separation of ‘religion and state’ was one of several reasons for many – both Christian and Muslim – to object to the rule of the Muslim Brotherhood. This kind of interference by the Coptic Church in political affairs not only contradicts an earlier stance regarding the Brotherhood, but also provides religious extremists with anti-Coptic rhetoric, making the church’s actions more dangerous for its subjects than anyone else.

Egypt’s Shorouk paper published an article on March 23, quoting an interview conducted with His Holiness Pope Tawadros II of the Coptic Orthodox Church by Kuwait’s Al-Watan television. Pope Tawadros, the article said, described the Arab Spring as a “malignant plan.” The very next day, on March 24, the same newspaper published another article quoting Pope Tawadros saying that he had not given any interviews “in ten days or maybe even two weeks.” While the second article did not explicitly say that Pope Tawadros denied making the statements attributed to him, it seemed to imply as much.

When talking about the church and its role in Egyptian society, Pope Tawadros can hardly be faulted. One of his most poignant remarks came when asked about the destruction of churches by Muslim Brotherhood supporters in the wake of the clearing of the Raba’a al-Adaweya sit-in last August, and he reiterated a point he had made numerous times before: that buildings could be rebuilt, but lives could not be restored. The contentious parts of the interview, however, came when he was asked about matters of both local and foreign policy. Perhaps the most striking statement – and the one Shorouk highlighted in the headline of its first article – was the Pope’s response when asked about the Arab Spring revolutions. After explaining the meaning of ‘Spring,’ and expounding on the importance of the Arab region in the international arena, Pope Tawadros goes on to say that he thinks the events in the Arab world over the past few years have “malicious intents, most importantly division.” He then elaborates even on the idea of dividing the Arab world, repeating statements that have been fodder for Egyptian and Middle Eastern conspiracy theorists for the past few years.

Pope Tawadros’ responses on foreign policy were not much more promising, especially when addressing the Ethiopian Renaissance Dam, a matter of contention in Egypt since the Muslim Brotherhood’s days in power. Commenting on the relationship between the Coptic and Ethiopian Orthodox Churches, Pope Tawadros said that the Ethiopian Orthodox Church used to be among the strongest authorities in the country, sounding like he was almost lamenting the fact that this was no longer the case. A pharmacist by training before joining the priesthood, Pope Tawadros then addresses the geological “hazards” associated with the dam, going so far as to suggest it could lead to land fissures resulting in the separation of the Horn of Africa from the continental mainland.

Barely four hours after Shorouk published the article detailing the content of the Pope’s interview, a member of the Coptic revolutionary group “Maspero Youth” contacted the newspaper, calling on the Pope to not interfere in politics. This prompted a response from the Church, with its media spokesman, Father Boulos Halim, stating that he had not yet watched the interview, and that it was “unlikely” that His Holiness had described the Arab Spring as malicious. The very next day, the article including the Pope’s assertion that he had not given any interviews in the past two weeks was published, also in Shorouk. The fact that there was a response from the Church, followed by a comment by Pope Tawadros himself, shows it’s possible that the extent of the problem was realized. What is quite surprising, however, was that the response did not mention the content of the interview – which is the real issue – but rather its timing. None of the issues addressed in the interview had changed in that month; the Arab Spring wasn’t renamed, the conspiracy theories he seemed to endorse have only grown louder, and the crisis of the Ethiopia Dam remains unresolved, itself mired in conspiracy theories and controversy.

While the situation has garnered the Pope a fair amount of criticism, it may actually present an opportunity for the Church to resume its rightful stance: separated from politics. This most recent of a series of unfortunate events that have dragged the Church’s feet deeper into Egyptian politics may just be the chance it needs to recognize its folly and backtrack on some of the more egregious interventions. While the Pope’s appearance beside the Grand Imam of Azhar and then-General Abdel Fattah al-Sisi on July 3 when the latter announced the removal of Mohamed Morsi from the presidency may have been a sign of national solidarity, the Church’s subsequent forays into politics have been highly problematic. Apart from the folly of religious institutions intervening in local politics, the seemingly unwavering support by the Church for the current regime, even when it is obviously mistaken, is more dangerous to the Church’s main interest – its flock – than if it were to stand aside as a completely impartial part of Egyptian society.

Amir Beshay completed his bacherlor’s degree in Computer Engineering at the Germany University in Cairo. He is currently enrolled in New York University’s Center for Urban Studies and Progress where he is completing his master’s in  Applied Urban Science and Informatics.