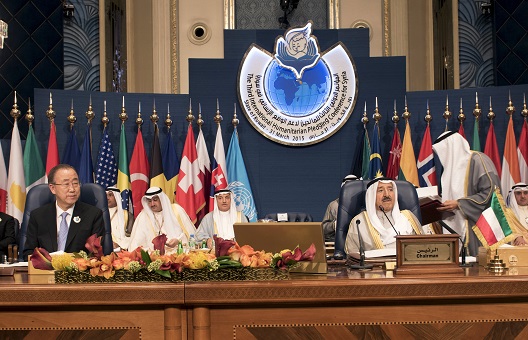 Almost eighty countries and more than forty international organizations gathered in Kuwait to pledge aid money for the crisis in Syria. The United Nations estimates the humanitarian needs in $8.4 billion, raising about half that amount at the conference. However, money may not be enough for Syria. Without tackling deeper issues that hamper humanitarian access in the country, the international community will continue to fail Syria. At the start of 2015, the population living in areas impossible or difficult to reach has doubled, partly due to insecurity, direct targeting of humanitarian workers, fluid frontlines, and a lack of effective engagement with armed groups. The United Nations has managed to deliver aid only to 1.1 million people in the worst affected areas, almost 2 million fewer people than the previous year. To serve affected populations, international organizations and donors will have to reconsider their policies toward working with non-state actors.

Whereas humanitarian action cannot replace a political solution, foreign aid can at least mitigate the suffering of those affected by war and provide at least part of a foundation on which to reach a cessation of hostilities. As it stands, foreign aid is insufficient and inefficient. Between 600 and 700 local NGOs have been established since the conflict began to reach areas that the UN has failed to access. International humanitarian organizations lack any noteworthy presence outside Damascus. Since the start of the conflict, humanitarian access has divided the international aid community in their means and policies. Operations have been managed either across frontlines from Damascus or across borders, mostly Turkey. Rarely have international aid agencies managed to operate across borders and frontlines simultaneously, largely because of Assad’s opposition to any cross-border operations. It was not until April 2012 when the UN reached an agreement with the Syrian Government to assist the civilian population. The agreement only authorized operations from Damascus and not across international borders.

Humanitarian assistance and foreign fighters share the same route from Europe to Syria through Turkey. Claims by some jihadists that they are in Syria doing humanitarian work only reaffirms Assad’s position that aid operations from neighboring countries only goes to help terrorists. The legality of cross-border operations without the government’s consent has been subject of lengthy discussions at the UN and international and legal fora. In what humanitarian agencies regarded as a long-overdue diplomatic move, the Security Council adopted resolution 2165 in July 2014, authorizing UN aid operations across borders without requiring the consent of the Syrian government in four designated border crossings: Bab al-Salam (Turkey), Bab al-Hawa (Turkey), Al-Yarubiyah (Iraq) and Al-Ramtha (Jordan). Shortly after the UNSC passed resolution 2191 in December 2014, renewing resolution 2165 for twelve more months, the Syrian government accused Saudi Arabia of using the UN Office of the Commissioner for Humanitarian Affairs border crossings to smuggle weapons and aid to Jabhat al-Nusra and other terrorist groups.

The public perception of humanitarian work intertwined with Islamic extremist groups fighting in Syria and Iraq poses further problems to international aid agencies trying to gain access to Syria. The risks are not only reputational. Under counterterrorism legislation, the risks of legal liability that come from engaging with proscribed armed groups has led to some agencies withdrawing from high-risk scenarios like Syria. This comes mostly from fear of the unknown and the complexities of counterterrorism legislation, murky waters that only a few international aid agencies have recently started to navigate. However, if international humanitarian agencies can agree on one thing, it is that without engagement with non-state armed groups that control access to civilians, delivering aid to war-affected populations is virtually impossible.

With the failure of foreign assistance programs and international diplomacy, local NGOs have emerged as a lifeline for the Syrian population, funded initially by remittances, private donors, and diaspora networks. Some of these groups started with a phone call from one friend to another and grew from there. That is how Syria Relief was born, with one person in Aleppo, and developed to be the largest UK registered charity operating inside Syria. Some groups have hundreds of staff; other groups consist of just a handful of volunteers. Some are registered charities and have an established structure, logistics, and reporting system. Others are managed on a shoestring and their transparency and accountability measures do not follow the general standards required by international donors. It is not a homogeneous group, but the general assertion is that these local NGOs know the country well and have the contacts. Many local organizations also believe that armed groups more willing to negotiate access with them as Syrians. Syrian NGO workers, however, are not exempt from risk. The Syrian Arab Red Crescent Society has seen forty of its volunteers killed since the start of the conflict, suffering attacks by different armed groups. With the social fabric of Syrian society being torn apart by four years of civil war and with foreign fighters joining radical Islamic groups, this protection based on a shared identity may not hold for much longer.

As former United Nations and Arab League Peace Envoy Lakhdar Brahimi has said on repeated occasions, there are ”plans of war… no peace plans. I don’t see anybody saying let’s stop fighting and let’s talk.” Brahimi resigned last year after the Geneva talks collapsed, out of frustration with an international system unable to forge a coherent response. A year later, the international humanitarian response speaks volumes about the shortcomings of the traditional aid system. Kuwait, the European Union and the Unites States pledge funds, but foreign aid still does not reach the civilian population. It is about time for the United Nations and donors to take a more flexible approach to engagement with armed groups.

Raquel Vazquez Llorente is a researcher with the London-based European Interagency Security Forum.