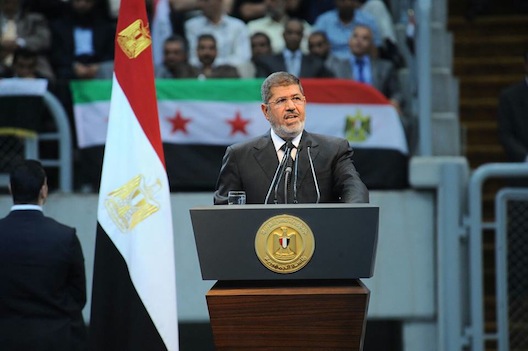 In early September, former Egyptian President Mohamed Morsi and others in the Muslim Brotherhood were charged under Egyptian domestic law with incitement to the murder of protesters in December 2012. Egyptian authorities have provided no details of the evidence against him. However, Morsi and the Brotherhood were responsible for several other instances of incitement during their year in power, and a legal case can be made specifically regarding the incitement of violence against Shiites.

Morsi neglected to enforce domestic criminal law by failing to denounce inciting speech by Muslim Brotherhood members and those in his presence during the Egypt-Syria Solidarity Conference on June 15, 2013. In the process, he violated international law and international obligations to which Egypt is bound. The result of Morsi’s abdication of duty was the killing of four Shiites in Egypt.

The most widely accepted international standards of free speech are found in the International Covenant on Civil and Political Rights (ICCPR). Egypt is one of 167 states parties to have signed and ratified the 1966 ICCPR. Article 20 in the ICCPR states, “Any advocacy of national, racial or religious hatred that constitutes incitement to discrimination, hostility or violence shall be prohibited by law.” Article 20 goes on to name group hatred as to be prohibited by law. The language here is strong: an international treaty is directing domestic legal prohibitions of expression. This is not suggestive or aspirational language most commonly found in international documents; this language is mandatory.

Next, the Convention on the Elimination of All Forms of Racial Discrimination (CERD), also a 1966 document, has 175 states parties, one of which is Egypt. The CERD says that all states parties shall declare punishable by law “all dissemination of ideas based on incitement to racial discrimination, acts of violence or incitement to violence against any group of persons of another color.” The document goes on to proscribe any organizations or governmental institutions themselves which may create such utterances. The CERD is applicable here because in 2008 the UN Human Rights Council (UNHRC) passed a resolution that reaffirmed that the CERD was equally applicable to incitement of religious hatred.

In 2011 the Organization of Islamic Cooperation (of which Egypt is a member) introduced a resolution, which was adopted by the UNHCR, on discrimination and free speech. Point 3 of the resolution condemns “any advocacy of religious hatred that constitutes incitement to discrimination, hostility or violence…” Point 5(g) of the resolution demonstrates “…the need to combat denigration and negative religious stereotyping of persons, as well as incitement to religious hatred…”

The preceding sources all point to an international legal consensus on the issue of incitement—they all condemn the advocacy of group hatred. It is important to note that an imminent physical manifestation of such hate is not required—the intent to cause hatred toward a group itself is proscribed. Hate speech can be restricted for reasons such as respect for the rights of others and public order. Incitement to discrimination, hostility or violence are also prohibited.

However, international standards are not the only relevant measures of incitement in Egypt. A part of Egypt’s complex legal system is the Penal Code, which dates from 1937. The Code is periodically updated and remains in force to this day. The Code criminalizes the use of religion in public incitement or the mocking or ridicule of religion in public. Specifically, article 98(f) proscribes the use of religion in propagating by speech extremist thoughts aimed at instigation division or disdain, and article 176 criminalizes the incitement to hate or deride a sect of people.

The 2012 Annual Report of the United States Commission on International Religious Freedom pointed out several incidents in 2011, one of which Morsi was in the presence of incendiary speech, but failed to denounce it. The report notes an October 19 statement against Jews, and several statements against Copts, such as on November 4 and 22. The 2013 Report found no improvement, and wrote that in the early months of 2012, an increase in government-funded mosques contributed to sectarian tensions.

Ikhwanonline reported that high-ranking Muslim Brotherhood members including Dr. Mohamed Wahdan stated at an event in April 2013 that, “that the Egyptian people and government would not allow the spread of Shiism in Egypt.” Similar comments were made at the Egypt-Syria Solidarity Conference on June 15, 2013. Morsi was in attendance, and the conference was initiated by prominent Egyptian Sunni clerics. Several clerics “labeled Shiites as ‘impure’ or ‘filthy’ and protesters as infidels.” Specifically, Ali Ahmed Salus referred to the Shia Assad regime in Syria as “atheists.” Mohammed Hasaan asked Morsi to not open the gates of Egypt to “deserters,” a derogatory term for Shiites. Hasaan further noted that jihad is the obligation of able Muslims. Mohammed Abdel Maqsud spoke of June 30 as a fight against infidels. Former President Morsi spoke last and did not denounce any such remarks. While Morsi avoided direct incitement, his Muslim Brotherhood encouraged listeners to engage in jihad against the Shiite government in Syria.

The language used by Muslim Brotherhood-associated clerics and those who spoken in front of former President Morsi falls on the president’s responsibility to denounce such incitement. A head of state is expected to hold such speakers responsible under the domestic Penal Code, and such an omission subjects the Muslim Brotherhood and Morsi to international legal liability.

The language heard at the conference clearly constitutes the use of religion in speech for extremist thoughts aimed at instigation division or disdain, which is specifically proscribed by Egypt’s Penal Code Art. 98(f) and 176. As the CERD clearly proscribes groups (such as the Muslim Brotherhood) which may create utterances that disseminate ideas based on incitement to group-based violence, the Muslim Brotherhood is in violation of that document, and should be subject to legal punishment. It is important to repeat that Morsi is a member of the Muslim Brotherhood. Further, the language also violates Points 3 and 5(g) of the Resolution Combating intolerance, negative stereotyping and stigmatization of, and discrimination, incitement to violence and violence against, persons based on religion or belief. They proscribe advocacy of religious hatred that constitutes incitement to discrimination, hostility, or violence, and requires the government to combat religious denigration and incitement to religious hatred. Lastly, the ICCPR, a legal treaty signed and ratified by Egypt, requires that state parties prohibit advocacy of religious hatred that constitutes incitement to discrimination, hostility or violence.

Morsi’s lack of enforcement of both domestic and international law was not harmless. Eight days after the speeches at the stadium four Shiites were lynched in a Giza village. Human Rights Watch (HRW) wrote that Morsi, “failed to make it a priority to create a strategy to protect religious minorities and has failed to speak out against months of hate speech against Shia.” A local village official told the Arab Network for Human Rights Information (ANHRI) the Shiites were targeted because, “The sheikhs from the mosques went out last Friday and said that Shiites are apostates and we have to kick them out of the village.” HRW noted the actions of the police to protect the Shiites in the wake of the incitement was insufficient, as were the responses from both the government and the Muslim Brotherhood. The Muslim Brotherhood has been responsible for religious-based incitement to violence in the past, as well as immediately before the bloody killings of June 2013. Former President Morsi knew, should have known, or had a substantial certainty that violent actions would follow from the words of his supporters spoken in his presence—yet he did nothing.

As such, by not denouncing the inciting speech of those from his own party or those who spoke directly before him at a major conference, former President Morsi failed to enforce domestic law and failed to uphold his international legal obligation as a head of state under the ICCPR and other international obligations to which Egypt is a party.

Ryan J. Suto is a research assistant at the Tahrir Institute for Middle East Policy

This article was originally published on JURIST.org