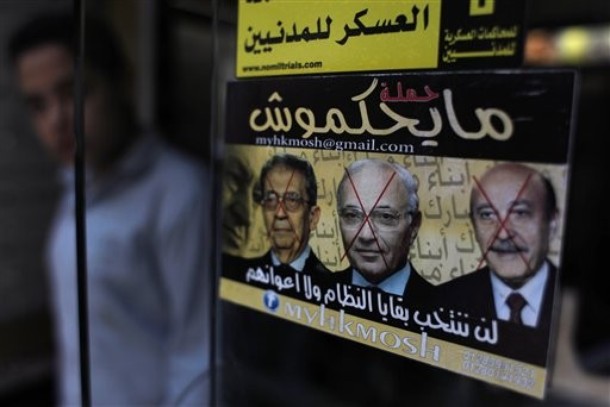 The political situation in Egypt is as volatile as it has been at any time during the transition, and it is quite clear that the Supreme Council of the Armed Forces (SCAF)’s confrontation with the Muslim Brotherhood will not be diffused anytime soon. The SCAF’s main weapon is the judiciary, which it tacitly controls, while the Brotherhood wields its leverage through its parliamentary majority. There are several different battles currently in play – 1) over the interim government; 2) the constitution; 3) the presidential elections; 4) and the potential dissolution of parliament – each of which increases the strain on an already unstable political environment.

With regard to the government, the SCAF want the current embattled Prime Minister, Kamal Ganzouri,  to serve for the remainder of the interim period, while the Brotherhood wants to dismiss Ganzouri’s cabinet and form a new, partisan government led by a Brotherhood prime minister or at least including many Brotherhood ministers. The Brotherhood feels that the SCAF has limited the powers of parliament,and is therefore undermining the Brotherhood’s ability to live up to their campaign promises of improving thelives of ordinary Egyptians. Growing disillusionment with parliament’s disappointing performance so far is beginning to take a toll on the Brotherhood’s legitimacy and appeal.

At the heart of the conflict between the SCAF and the Brotherhood is the unresolved question of who will have legal authority to choose the government according to the new constitution: parliament or the president or both (and, more importantly, what role would the SCAF play in the process). The Brotherhood wants to take advantage of the opportunity to showcase its preferred scenario —  a partisan Brotherhood-led government — in the hope that test-driving this hypothetical model during the current transitional period would increase the chances of legalizing this approach in the new constitution. It seems that a compromise is not far from being reached on this front, with a minor cabinet reshuffle expected soon, allowing the Brotherhood to save face after weeks of demanding a new government – a controversial proposal that brought parliamentary sessions to a standstill for a week and provoked a sit-in by a bloc of non-Islamist MPs who had opposed calls for a reshuffle

Nevertheless, depending on the outcome of the other ongoing battles, the SCAF may choose not to make any compromises, leaving the Brotherhood to deal with its declining popular support on its own.  If a face-saving compromise cannot be reached, the Brotherhood may try to deflect criticism of its disappointing performance in parliament by blaming the SCAF for keeping Brotherhood members out of the Cabinet.

Regarding the second battle over the constitution, the SCAF has already used its favorite weapon (the judiciary) to annul the composition of the 100-member Constitutional Committee that the Brotherhood-controlled parliament selected. The SCAF has since aligned itself with the liberal parties and is pushing the Brotherhood to reformulate a more balanced Committee. The fight is not really over how liberal or regressive the new constitution is or how balanced or unbalanced the composition of the Committee will be. It is more a fight over the role of the military in the new constitution. The SCAF wants to maintain its control over national security issues, and the Brotherhood is worried that the SCAF would use any constitutional role they have to intervene in the political process on grounds of protecting national security.

Yet another battle is brewing over the upcoming presidential election. Neither the SCAF nor the Brotherhood has a candidate that is perfectly aligned with their interests. The two front-runners are Amr Moussa and Abdel Monem Abou El Fotouh.  The SCAF will probably be able to work with Moussa, Mubarak’s former Foreign Minister, but the Brotherhood will have difficulty cooperating with Moussa without further alienating the group’s base of supporters. The Brotherhood could probably tolerate (with a great deal of bitterness and embarrassment) working with Fotouh, an ex-Brotherhood leader, but the SCAF will not be as willing to work with an Islamist known for his independence and opposition to American aid, from which the Egyptian military benefits.

To complicate matters, the Supreme Presidential Electoral Commission (SPEC) is controlled by the judiciary, one of the SCAF’s few remaining friends, and according to the Constitutional Declaration, the SPEC’s decisions are final and not subject to appeal. The Brotherhood fears that the elections, fair or rigged, would bring Amr Moussa or even worse Ahmed Shafik (who would be a yes-man for the SCAF) to power. The Omar Suleiman debacle, in which Mubarak’s former vice president was disqualified with nine other candidates, including the Brotherhood’s first choice candidate, Khairat al-Shater, and the resulting protests near the Ministry of Defense last week – staged by supporters of the disqualified Salafi contender Hazem Saleh Abu Ismail – were formally instigated by the SCAF or the Brothehrood, but it is quite clear that the Brotherhood used their Salafi Islamist allies as proxies, while the SCAF used the judiciary as their own pawn.

The SPEC’s controversial ruling was a test of the strength of the SCAF should the Brotherhood dare bring their supporters to the streets in defiance of the election results. The outcome was a stalemate that proved the SCAF can defend a controversial but still reasonable decision, but perhaps not an outrageous one. It is quite clear that the Brotherhood cannot create havoc in the streets with a probable Moussa win – due to Moussa’s relatively high approval ratings — but that they could certainly create all sorts of problems with an improbable Shafik win, due to the latter’s negative association with the former regime.

The fourth battle, which is also the option of last resort for the SCAF, is the potential dissolution of parliament for constitutional reasons, which is a weapon the SCAF can activate if the circumstances are favorable or the need arises (again using their trusted ally, the judiciary). With the next hearing conveniently timed to take place between the results of the first and second rounds of the presidential election, all options are open on this front. Coincidentally, the long awaited verdict in Hosni Mubarak’s ‘Trial of the Century’ is also scheduled to come out between the two rounds, which could inject even greater drama and controversy into an already volatile political atmosphere.

With these four looming battles in mind, the stage is set for a compromise between the SCAF and the Brotherhood, both parties having tested their respective strengthens and probably reaching the conclusion that neither can out-muscle the other. Amid these negotiations, it is also likely that the uncompromising hardliners in both camps will try to set up their opponents for a strategic blunder or capitalize on instability brought about by an endless number of possible scenarios: Mubarak’s acquittal, a Shafik win, unreasonable protests against a Moussa win, ill-timed dissolution of parliament, constitutional vacuum, inability to compose a stable government.

The fate of Egypt’s democratic transition depends on this four-front confrontation and whether it will end in war or détente. Yet this confrontation is masked by noisy ideological rhetoric mostly involving Salafis and liberals, hundreds if not thousands of minor events taking place all over the country with the media jumping at every opportunity to cover a headline story, at the expense of reporting on the issues that really matter:  the power struggle taking place beneath the surface of Egyptian politics between the Brotherhood and the SCAF; an economic downturn, a volatile security situation, and a historic presidential election that represents a landmark on Egypt’s long and uncertain road from military dictatorship to democracy.

Mohamed Gabr is an Egyptian lawyer and partner at DLA Matouk Bassiouny, a law firm affiliated with DLA Piper. He was a founding member of the al-Adl Party and served as the party’s legal advisor until the end of 2011. He holds a B.A. in Economics and an M.A. in International Relations from the American University in Cairo and an LL.B. from Cairo University.