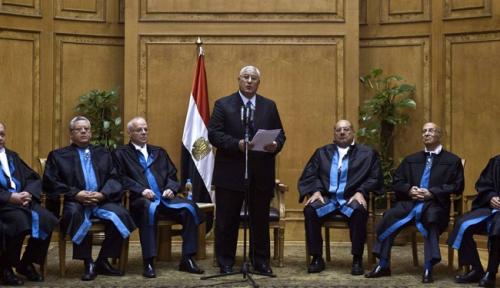 Egypt began the deeply important process of creating a new constitution on Sunday.

Ten legal experts—six senior judges and four well-known constitutional law professors—have been given only one month to work on the daunting task of amending the existing constitution. The interim president’s constitutional advisor stated that these legal experts comprise the sole authority capable of officially proposing amendments to the constitution; outside groups and the general public have only one week to offer suggestions to the committee. Thereafter, a larger committee, intended to be representative of the varied social and political groups of Egypt, will have two months to review the proposed changes and consider the entirety of the document before it is put up for a national referendum.

This accelerated constitutional process puts Egypt at an important moment in history, one where it must both reconcile the conflicts of the past and create the legal structures for the future. These are two inter-related, but ultimately distinct, challenges. Egyptian power brokers must rebuild and legitimize institutions such as the presidency, the legislature, and the judiciary in order to prevent the conflicts that brought Egypt to June 30 in the first place. To best ensure that mass protests do not fill Tahrir again in 2014, the constitutional drafters should learn the lessons of other constitutional experiences, such as those of South Africa and Cambodia, which can help guide Egypt forward.

First, it is encouraging that from the beginning of the most recent process, the military has pledged to put the constitution to a popular referendum before parliamentary elections occur. Public participation in the constitutional process, however, seems to be again lacking. This was a major flaw in both the writing of Egypt’s 2012 constitution and in Cambodia’s constitutional experience—a lesson from which the current government seems not to have learned. The Egyptian street must feel that its voice has been heard by any government hoping to claim legitimacy. However, all of the members of the committees involved in the constitutional process have been (or will be) appointed by the interim government. Though the government’s constitutional declaration requires that the committees have a broadly representative, technocratic membership, the Egyptian people have not had direct input in this important part of the process.

Second, the new constitution must allow for power-sharing. That is, in addition to involvement in the creation of a new government, all groups must also have a stake in its success. The current process suffers from a lack of participation by the Muslim Brotherhood and many related entities; these groups represent an important segment of Egyptian society that is refusing to recognize the new government. Without all major political actors on board, conflict will likely continue, and the Brotherhood may become a spoiler to future governance processes. Indeed, the organization has said before that negotiations cannot progress without Morsi’s reinstatement as the president, an obvious non-starter for both the military and those who took to the streets on June 30.

Of course, getting the current governing factions and Islamists to submit to the same institutional constraints will not be an easy task. If representatives from groups like the Muslim Brotherhood/FJP or the Nour Party are ultimately included in the larger constitutional committee, then the likelihood for wide consensus around issues like gender quotas and the role of sharia would decrease. This can be acceptable; as such political questions are more properly sorted out after representatives are duly elected. Leaving such questions to the legislature can help to encourage capacity-building within parties seeking legislative seats; it also limits the number of up-front tasks involved in constitution building.

There are limits to what should be able to be compromised, of course. Unlike the previous constitution, which was largely written by Islamists, the new document must include sufficient human rights protections for all Egyptians, including religious minorities and women. Moreover, the powerful executive office that Morsi created must not be allowed to remain. Real legislative checks over the presidency, in addition to promoting good governance, would allow more Egyptians to feel that their voices are being heard in the halls of government. Along these lines, it is important to note that the small “expert committee” charged with amending the present constitution contains no women, though the yet-to-be-named fifty-person committee must include “ten members [representing] young people and women.”

The third recommendation is that the military, the current government, and the new constitution must ensure that democracy is “the only game in town.” To do so, they must marginalize violence and clearly denote extra-constitutional governmental actions as unacceptable. In short, all actors must respect the rule of law.  The constitution must also make available effective avenues for the people’s voices not only to be heard but also to be  translated into institutional transfers of power—such avenues include citizen initiatives, referenda, and other forms of direct democracy. Transitional justice is also an immensely important task, especially as calls for Friday demonstrations increase. Real options, such as truth commissions, an independently-administered media watchdog organization, and national dialogues should be kept open for exploration. Processes must be created to help reconcile the deep divisions created among all Egyptians who have been victimized by the extremist politics of the past several years. While it would appear Mohamed Amin al-Mahdy has been given this task as Minister of Transitional Justice and National Reconciliation, his mandate and scope of duties remain unclear.”

Lastly, real local governance should be created in Egypt. Presently, governors are appointed by the president, and they are often retired members of the military or police. Governors, municipal council members, and city mayors should be elected and given effective abilities to govern. Such decentralization of power would allow for local governments to provide more directly for their people, possibly allowing some of the many pressing political questions in Egypt to be addressed separately by smaller groups of Egyptians. Political decentralization would also likely result in economic decentralization, thereby decreasing the power of both the executive and the military’s “deep state” and  increasing the influence of average Egyptians. The lack of local political and economic power is arguably one of the reasons Egyptians have been flocking mainly to Tahrir and some regional centers in the first place—they have nowhere else to go to express frustration.

If heeded, these recommendations could help Egypt prevent a recurrence of their recent experiences. It is important for the current government to remember that democracy does not simply equal elections, a reality that Morsi failed to acknowledge during his time as president. Democratization requires elite consensus on legitimacy, a culture that accepts politics (not force) as the method of determining power, and respect for the rule of law. However Egypt meets these challenges and answers these questions, one thing is clear: in the end, any successful solution must be a purely Egyptian one.

Ryan J. Suto is a research assistant at the Tahrir Institute for Middle East Policy.