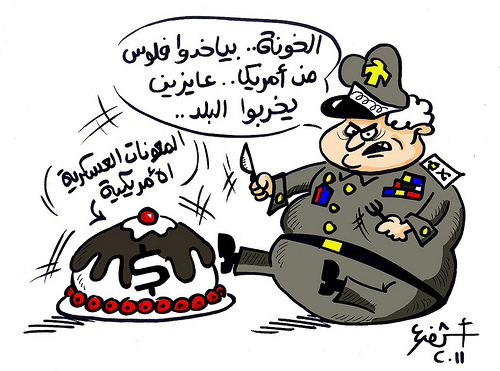 The latest insult to Egyptian non-governmental organizations — still reeling from the most recent raids that took place on December 29 — has come in the form of a new draft law put forth by the interim government to regulate the activities of civil society groups and associations. Mohammed al-Demardesh, Legal Advisor with the Ministry of Insurance and Social Affairs, announced the proposed "Law on Associations and Foundations" on January 18, intended to replace the highly controversial and restrictive Law No. 84 of 2002 governing the formation, funding, and operation of civil society organizations. Rights groups have reacted strongly to the proposed law, condemning the closed discussion surrounding its submission.

On January 19, nine Egyptian NGOs issued a joint statement rejecting the regulations, warning the Supreme Council of the Armed Forces (SCAF) against supporting Mubarak-era policies that would inevitably produce yet another confrontation with the Egyptian people. The Egyptian Organization for Human Rights (EOHR) also held a meeting with civil society representatives and rights groups today to discuss the failings of the current draft and propose an alternate law that would allow NGOs to operate freely.

May eliminate the legal basis for many human rights organizations as well as other groups. A number of Egyptian human rights organizations organize as civil companies. Under the draft law, they would be required to register as associations or foundations. This could be problematic, because under the Law on Associations and Foundations the government has broad discretion to deny registration. Even if the groups manage to register, they would be subject to the restrictive provisions of the law, including provisions limiting access to foreign funds and affiliation with foreign organizations. (Preamble, Article 3).

Requires approval of the Ministry of Social Solidarity before an Egyptian organization may affiliate with a foreign organization. (Article 12).

Restricts foreign funding of Egyptian associations and foundations as well as domestic fundraising; both require the approval of the Minister of Social Solidarity (Articles 13, 14).

Limits associational activities. Associations will only be allowed to work on issues related to “social welfare and development and enlightenment of society” as defined by the Ministry of Social Solidarity, and will not be allowed to work in more than two issue areas without permission from the government (Article 9). The government may interpret the promotion and defense of human rights as falling outside of the permissible fields.

Raises the minimum number of founders of a new association from 10 to 20, and the minimum initial endowment for foundations to LE 100,000 (Article 1), making it more difficult to register new organizations.

Mandates registration of all associations and foundations (Preamble Article 3), and imposes criminal penalties on individuals who establish unregistered groups.

The Egyptian Initiative for Personal Rights (EIPR) released a press statement accusing Mubarak loyalists of using revenge tactics against watchdog organizations. The resubmission of the draft law apparently occurred after a meeting last week between Kamal al-Ganzouri, SCAF-appointed Prime Minister, Faiza Abul Naga, Minister of International Cooperation, and Ali al-Moselhy. Although Mohammed al-Demardesh assured the public in an interview with al-Shurouq newspaper that the “law was not finalized and open to amendments,” he made it clear that all groups, “whether religious or development based, would be subject to oversight.” The Ministry of Social Affairs has offered a 15 day time period during which it would accept comments on the draft law.

This latest development seems only to reaffirm the belief that the old Mubarak regime remains alive and well during the transitional period. Nasser Amin, executive director of The Arab Center for Independence of the Judiciary ‎and the Legal Profession among the NGOs raided in December, believes that NGOs will continue to struggle so long as organizations have to fight a government that undermines democracy and human rights groups in the country.

With the newly elected People’s Assembly– granted a powerful political mandate by the 60 percent of Egyptians who voted in the elections —  set to convene its first session on January 23, 2012, it will fall to these representatives to change the tone on the discourse surrounding NGOs operating in Egypt and bring it in line with international standards. The incoming parliament has a public duty duty to challenge legislative attacks on free expression and free association. It must also work with civil society groups if Egypt hopes to see any advancement toward implementing an institutional and legal framework that protects internationally guaranteed basic rights, a fundamental goal of the revolution.