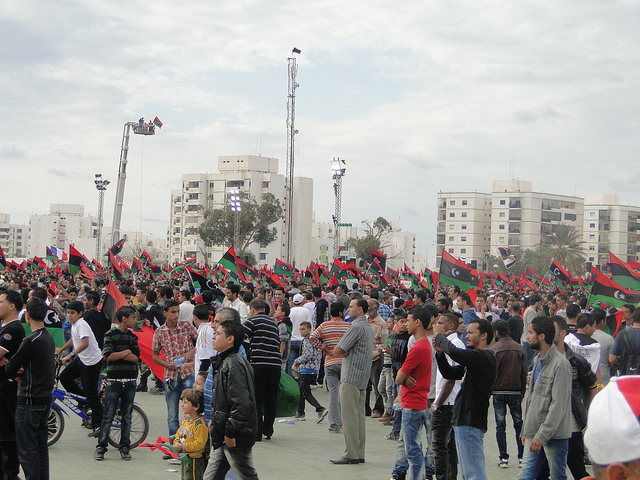 The next few weeks in Libya will be extremely critical for the government of Prime Minister Ali Zidan. Passage of the so-called political isolation law is a clear sign that the offensive organized against the prime minister by a coalition of opponents has been successful. There is no doubt, that the law, which bans from public activity anyone who held a high-level position in former ruler Muammar al-Qaddafi’s government, is all but a fig leaf to cover a much wider purpose: the toppling of Zidan’s government.

Zidan’s government represents the liberal coalition headed by Mahmoud Jibril with the unenthusiastic support of the Justice and Construction Party (JCP), the political arm of the Muslim Brotherhood. Immediately after taking office in October 2012, Zidan began trying to enforce the rule of law and public order by attempting to dissolve the Supreme Security Committee, a group of militias nominally tied to the government but outside the official apparatus. Zidan tried to clear the capital Tripoli of armed groups and militias and initiated programs to build up the regular army units, strengthen the police force, and rebuild the intelligence service. Collectively, these activities fostered resentment among many militia leaders, who felt that the government was working against them to diminish their role and their activities.

Pushing back, some of these militias initiated a military buildup against the government a few months ago. Reliable intelligence sources estimate that in the month of April alone more than three hundred armed vehicles were brought to Tripoli to strike against ministries and government buildings, which caused frequent, massive disruptions in the capital over the last week.

The militias’ goals were threefold: to paralyze the government, send signals to the international community, and scare the population. Although militias succeeded in all three of these areas, they would not have been able to paralyze the government without the political support of other, largely Islamist, forces. Specifically, the Brotherhood’s JCP and some Salafist groups that considered Zidan a secularist and a puppet of the more liberal Mahmoud Jibril. Even though the JCP are part of the Zidan government, they began pushing—with support of the Libya’s Grand Mufti Sheikh Sadeq al-Gharyani—for the adoption of the political isolation law as a tool to leave the government in crisis and force its members out of office. These groups would like to substitute Zidan for a leader more amenable to Islamist values.

Beyond these two groups there are also the occult interests of others, such as jihadi groups and criminal organizations, which reduce the probability that Zidan will be able to hold on to his position . Unfortunately, Zidan has not helped himself much by being defensive and dismissive. Instead of pursuing a policy of dividing and conquering his opponents, he allowed them to congregate and unite against him and his government. This is due not only to his personality and lack of political experience, but also to the absence of a capable structure of advisers and supporters around him. In fact, Zidan has vigoruously defended the performance of his government throughout ongoing crises, blaming its shortcomings on the lack of developed institutions, the difficulty of working in a legislative vacuum, and the continuous provocations of armed groups.

Moreover, Zidan stood by and supported individual ministers when they were attacked. A clear example is his defense of Minister of Justice Salah al-Marghani, who campaigned to pass a law to criminalize torture and seize control of prisons from militias (who argue they were legitimately running them). He also defended the decisions taken by Minister of Foreign Affairs Mohamed Abdulaziz, and the appointment of many ambassadors seen as being too close to the Qaddafi regime. Although all these actions were morally and legally correct, they exposed Zidan as a target for discontented elements who then coalesced against him.

Moreover, many of those who were most active in proposing and pushing for the political isolation law are disgruntled individuals who lost their bid to be a member in the GNC, or were passed over for positions in Zidan’s government. These individuals see the isolation law as a very useful tool to oust a number of politicians and government officials in hopes of replacing them. Some have even proposed a national salvation government list, a move that reveals their true aim to be the collapse of the government and not simply the passage of a law necessary to achieve the aims of the Libyan revolution, as they often claim.

Given the precarious situation on the ground, it is vitally important that the international community help Libyan civil society and the Libyan government to defend the rule of law and a peaceful transition to democracy. Foreign governments and international institutions should be raising objections to the content and manner in which the political isolation was passed—under duress and with the presence of hundreds of armed militants surrounding the congress building and the ministries. Allowing what happened on Sunday to pass in silence is the equivalent of giving a green light to those who think that the political struggle can be resolved through violence instead of through dialogue and words.