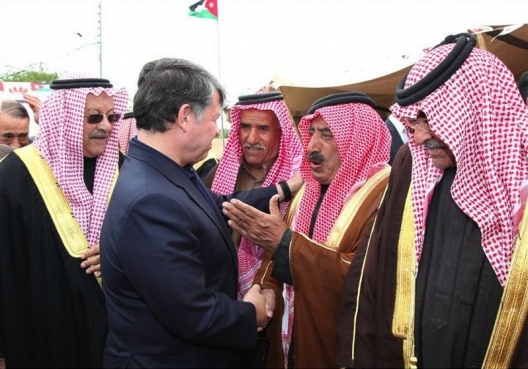 Although it appears that Jordan has survived the Arab uprisings thus far, all is not well in the Hashemite kingdom. Over the past 20 years, its political economy has changed profoundly, putting pressure on the foundations of regime stability. The state in Jordan has been retreating from many citizens’ economic lives, shrinking its circle of privilege and patronage, and leaving the population to fend for itself in a dysfunctional economy.

Worryingly, the segment of the population most affected is the monarchy’s base, which sees the Palestinian-Jordanian population as benefiting from the new status quo. Jordan is also coping with hundreds of thousands of Syrian refugees, many of whom may remain in the country long-term. However, the real danger to the monarchy’s stability is not the immediate cost of refugee care, but the alienation of its traditional power base.

The bloodshed that has followed a peaceful uprising in Syria is helping contain the Jordanian people’s appetite for political change. Rather than use this to scare its public into accepting an unsustainable status quo, the regime ought to use this breathing space to take the political risks associated with transforming its institutions and reimagining its relationship with its citizens.

The brewing crisis in Jordan calls for political creativity and boldness that the monarchy and its allies have yet to show. Simply put, Jordan needs a new social contract if it is to survive economically and politically. If it succeeds, it may present a much-needed transition model for other Arab countries. If it fails, or fails to try, the monarchy may well survive and muddle on, but only until its economic and political problems begin to fuel serious civil unrest.

Compared to conflict-ridden states such as Libya, Egypt, Yemen and Syria, Jordan is relatively well-placed to experiment with managed political and economic transition, and to renegotiate the social contract between state and citizen. More broadly, Jordan’s case highlights the importance of understanding and addressing the political economy of stability and change in the Arab world.

Too often, regional analysis focuses on geopolitics, the high politics of regime and party elites, and basic macroeconomic trends and indicators, at the expense of a rich and nuanced understanding of how ordinary Arabs navigate the economy and public life.

Integrating political economy analysis would allow policymakers to see how economic reforms impact political stability, and helps explain why, despite implementing some pro-market reforms, no Arab states have yet succeeded in creating dynamic, inclusive free-market economies. If policymakers hope to influence Jordan effectively and responsibly, they need to account for the links between the political and economic foundations of regime stability.

Reforming fundamentally conservative regimes of entrenched economic, political and bureaucratic elites is extremely difficult, and may even be impossible, but it has not yet been fully attempted in Jordan. The economic and institutional knowledge and expertise is available, however, and with sufficient political will, such a fundamental process of reform could be possible.

It may be wisest for Jordan to begin by building effective state institutions, a government of laws that can absorb and channel political mobilization. As the political system most conducive to sustained economic development, democracy should still be the end goal. To succeed, the government needs to build a supporting infrastructure that includes an empowered civil society and media able to hold public officials accountable; an equally-empowered judiciary and legal bureaucracy in which the security forces’ role is less dominant; a consistent and rationalized legal system and laws; a healthy middle class that includes East Bankers, and ultimately an electoral law giving rise to a more representative parliament that does not engender fears of Palestinian dominance.

When some of these suggestions were proposed in the National Agenda in 2005, it was described by its main architect as “dead on arrival.” Entrenched elites had no desire to compete in an open, meritocratic order, and higher authorities were unwilling to face the risks of proceeding anyway, and unable to devise bold and creative ways of co-opting opponents and recruiting new allies.

With an educated population, a monarchy that retains significant legitimacy, and a comparatively stable security environment, Jordan is a relatively strong candidate to become one of the first well-governed Arab countries.

This will be a painful, delicate process requiring total commitment from King Abdullah and his trusted advisors, and much more than cosmetic electoral reforms and sporadic anticorruption campaigns. It will involve building a nation of citizens with a stake in the state and economy.

At this time, the institutional prestige of the monarchy is protecting King Abdullah and his allies. However, if the regime were to use widespread, sustained violence against its people in the event of serious economic and political unrest, prestige would hardly guarantee its survival.

Undertaking an ambitious program to build a new political economy before such violence erupts would be in the long-term interest of the royal family, security establishment, old guard, new economic elite, and less privileged Jordanians of Palestinian origin.

This article first appeared on Al-Arabiya