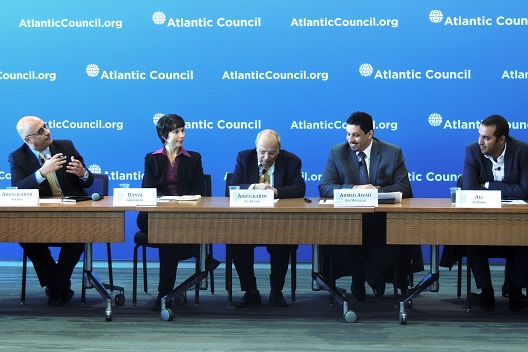 A roundtable discussion about Yemen’s fragile state of affairs in Washington is perhaps not all that notable, but this one marked a historic moment. Cohosted by the Atlantic Council and the Center for International Private Enterprise on November 19, a representative from the Houthi movement—a Shia-Zaydi revivalist group with an armed militia—spoke publicly in the United States for the first time ever and shared the stage with two of Yemen’s most important political leaders. The panel represented three very different poles within Yemen’s political spectrum: Dr. Abdelkarim al-Eryani, a former prime minister and stalwart member of old elite; Dr. Ahmed Bin Mubarak, President Hadi’s chief of staff embodying the next generation of pro-democracy leaders, and Mr. Ali al-Emad, a youth activist from Ansarullah, the Houthi movement’s political wing.

The discussion was remarkable as much for the pointed exchanges between Mr. al-Emad and Dr. al-Eryani and Dr. Bin Mubarak as it was for the spirit of respect and congeniality between figures on opposite ends of the political spectrum. The willingness to engage and dialogue despite deep fissures is a defining characteristic of Yemenis and helps explain how the country has managed to come back from the brink time and time again. For an almost-always-failing state, Yemen has defied many predications that it would dissolve into civil war; the commitment of those on the panel to a peaceful and prosperous Yemen encouraged many observers to believe the country’s leaders will manage to navigate its way through this crisis as well.

Reflecting on how Yemen will move forward, al-Eryani affirmed that the National Dialogue Conference (NDC) outcomes and the GCC initiative still serve as a roadmap for Yemen—despite the Houthi incursion into Sana’a and elsewhere. He also advocated that all parties should strive to create the federal system agreed upon at the conclusion of the Dialogue and focus on producing a new constitution enshrining those principles. However, al-Eryani wryly noted that Yemen’s political environment is challenging, and with a knowing smile, he remarked that “as a prominent member in the General People’s Congress, some wings of party are making life difficult for me,” presumably referring to the ongoing influence of former president Ali Abdullah Saleh and efforts to oust al-Eryani from GPC party leadership.

Perhaps most notably, al-Eryani was direct and candid about his discomfort with the Houthi movement’s tactics, describing them as a “non-civic, political movement that resorts to military means to advance their aims” and described their “objectives as undefined and unlimited.” Responding to the notion that the Houthis are in a defensive, rather than offensive, posture al-Eryani said that the Houthis have more heavy weapons and artillery at this point than the Yemeni army. According to the September 21 Peace and Partnership agreement, the Houthis were supposed to return all heavy arms to the government, but they have yet to do so. For al-Eryani, this fundamental gap calls into question their true aims and their desire for a political solution. In his view, so long as the group’s political objectives remain unclear, a political solution will be difficult to obtain.

Dr. Mubarak was more conciliatory and acknowledged that the Houthis had played a very positive role in the National Dialogue, and despite the fact that their use of force has created a tear in Yemen’s social fabric, the Peace and Partnership agreement is now the only way forward. Mubarak said that the agreement, co-signed by the government, all the major political parties and the Houthis, was explicitly based on the NDC outcomes and implicitly based on the GCC initiative. The only way for the process to move forward is for the Houthis to accept and help implement the agreement by giving up their heavy weapons and rejoining the political dialogue in Sana’a.

Assuming the task of presenting the Houthi case to a Washington audience, al-Emad presented a measured narrative of why the Houthi movement had taken the actions it had over the past several months. In response to concerns about the Houthis’ military action, he countered that all the major political players in Yemen have their own militias, and that the Houthis are not the only group to resort to the use of heavy weapons and arms to advance their aims. He said that the Houthis have always been clear about their identity, political objectives, who they identify as enemies (factions with ties to al-Qaeda). Furthermore, he argued that it was because the outcomes of the NDC had not been implemented and their exclusion from political power after the dialogue that led to their current situation.

Al-Emad said that too much emphasis was being put on the Houthis’ militias given the prevalence of armed groups in Yemen, and that the Houthis have used their militia for defensive purposes. He pointed to the September 21 agreement as a sign that, even though the Houthis were well-armed, they were prepared to work through peaceful channels. In his eyes, the Houthis have assumed a security role only because they were compelled to fill a security vacuum left by ineffective government forces. Given the presence of al-Qaeda and political assassinations targeting heir members without any response from the government, al-Emad suggested there had little choice but to fill this void and the Houthis have proved to be an effective a bulwark against al-Qaeda, first in Ibb, Hudaydah, and later in Bayda province. In fact, al-Emad noted that the Houthis have had a “decisive victory” over al-Qaeda, in contrast to ineffective US and Yemeni drones strikes. He seemed to indicate that they will continue performing this function out of necessity, but that they do not seek to replace the government.

In response to questions about whether they would register as a political party and compete in elections, al-Emad said that the Houthis do not want to be associated with a “dictatorial” state and would only enter formal politics once a democratic, civil state with functioning institutions had been established. He reiterated that exclusion from the political process was unacceptable, and that only once political freedoms in Yemen were achieved the Houthis would put their own representatives in the government. Al-Emad asserted that the Houthis were not subjected to any foreign influence, and that the peace and partnership agreement of September 21 was more legitimate than the GCC initiative, having been signed in Sana’a rather than Riyadh. As for the recent UN decision to sanction two Houthi leaders, he said the movement actually “welcomes international condemnation, as it confirms the group’s firmly Yemeni status.”

Mubarak responded next that both the Houthis’ resort to arms and struggle against al-Qaeda had dangerous implications. Both Al-Eryani and Mubarak expressed frustration that the Houthis would not nominate official candidates for government positions but instead opted for informal influence. Mubarak said that the Houthis “want the power without the responsibility” of governance. He warned that the Houthi use of force to achieve political aims is unacceptable, and fighting Sunni extremists raises the possibility of inflaming sectarian tensions throughout the country.

In response to the narrative al-Emad presented—that the Houthis have largely acted in a defensive posture—Mubarak said that the Houthis’ rise has caused much of the instability in the country and that Houthi action against Islah or Salafist forces started just one month after the completion of the National Dialogue. Since September, the Houthis have intensified their activity and they are destabilizing the country by fighting tribesmen who are already anxious at the prospect of losing some of the benefits of a centralized state. He pointed out that Herak – the large southern independence movement – is a nonviolent, popular party that has not resorted to large-scale violence, despite having separatist aims.

Mubarak clearly stated that the Yemeni government and the international community should accept that the Houthi movement is an important actor in Yemen now, but he called upon the Houthi leadership to re-enter the political process. He noted that “adopting a zero-sum attitude with political winners and losers is dangerous. Such an attitude could lead long-standing resentment that might ultimately engender further conflict, like what happened after the 1994 civil war.”

After two hours of heated debate, the discussion closed with a reiteration of the idea that the three speakers, representing the old guard, youth, and rebels, all seek a more stable future for Yemen and embody the spirit of dialogue that has brought Yemen this far despite its myriad challenges.

Danya Greenfield is deputy director of the Atlantic Council’s Rafik Hariri Center for the Middle East.

Owen Daniels is an intern with the Atlantic Council’s Rafik Hariri Center for the Middle East.