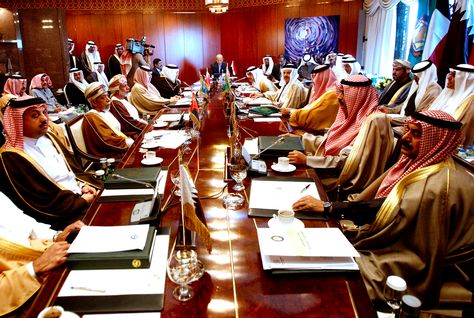 Different approaches in the Gulf to the ongoing change in Egypt emerged again in stark relief as the Gulf states began to publicly enunciate their reactions to the massive display of force and loss of life in Egypt on August 14. While some commentators had speculated that Gulf positions regarding political change in Egypt might begin to converge after Prince Tamim took over as Emir in Qatar, it became clear on Wednesday that the divisions that emerged even before President Mubarak was ousted, if anything, are deeper than ever.

Commenting on August 14 as the horror was unfolding on the streets of Cairo, Qatar was the first Gulf state to issue a semi-public statement (through an unnamed Foreign Ministry official) and again it staked out a unique position among fellow Gulf states. A Qatari foreign ministry official was unequivocal in condemnation of the attacks on Muslim Brotherhood demonstrators, and called for the Egyptian authorities to pull back from the “security choice.” The statement not only called for dialogue to resolve the current crisis but went on to accuse the Egyptian authorities of acting in bad faith in their earlier negotiations, noting that “the calls for dialogue could have been fruitful if they were followed by indications to show seriousness such as releasing the political detainees and halting the prosecution and chases.” The Qataris did not direct any of their criticism to the Muslim Brotherhood, and they eschewed the formulaic call for “restraint from all sides” adopted by the US and others.

The United Arab Emirates, representing the polar opposite view in the Gulf, was the next GCC state to comment, reinforcing its support for the Egyptian military—”reaffirming its understanding of the sovereign measures taken by the Egyptian government after having exercised maximum self-control.” The Emirati statement blamed the Muslim Brotherhood for bringing the violence upon itself through its aggressive rhetoric and incitement. It concluded by reaffirming UAE interest in “protecting Egypt and Egyptians from violence, blood shedding, and “urged the start of national reconciliation and embracing the roadmap” that the Egyptian military had suggested when it removed former president Mohamed Morsi.

While no official reaction had emerged from Saudi Arabia, Oman, or Kuwait as of August 15, the Bahrainis issued a statement offering support for the Egyptian crackdown, referring to the inalienable rights of public security, stability, and order. The Bahraini statement referred briefly to the loss of life and called for dialogue and reconciliation, without any mention of the form that should take. [UPDATE: Saudi Arabia joined the UAE and Bahrain in supporting the Egyptian government while also pinning responsibility for violence in Egypt on unnamed outside forces. In a statement read on state television on August 16, Saudi Arabia’s King Abdullah positioned the Kingdom firmly on the side of military leadership. Calling on Arab countries to stand against terrorism and attempts to destabilize Egypt, the king blamed recent strife on a “conspiracy of plotters” attempting to interfere in Egypt’s internal affairs.]

Unless there is some rapid (and unlikely) move by the Egyptian military authorities to repair the international damage caused by the actions taken on August 14, Egypt will be isolated in the near term, with little prospect of any new aid flows from the IMF, US, or EU. Essentially Saudi Arabia and the UAE (and perhaps Kuwait), will be called upon to keep the military-controlled government afloat in the short to medium term. Given the prospects for continued instability or at least major uncertainty, there is little prospect of significant foreign investment flows, and some prospect of additional capital flight. Turkish investment, one of the major sources over the last several years, will be problematic, especially after the harsh official Turkish reaction to Morsi’s removal and the violence against Brotherhood supporters. Tourism is unlikely to recover for some time. Egyptian business people, including some who were enthusiastic about a military coup against Morsi, may commit to some new investments but they have been known to strongly hedge their bets.

Sustaining the Egyptian economy will be a no small task for the Gulf states that have sided with the military crackdown. Their quick $12 billion dollar support package (announced as soon as the Brotherhood was removed from power) may sustain the Egyptian economy for a year, but that’s by no means clear, and it certainly won’t provide any net new investment that would bring jobs. The notion of some sort of broadly-supported international Marshall Plan for Egypt, being floated in Washington by the UAE and others since the military takeover, was never likely to take shape and is now dead in the water.

No Time for “I told you so”

As the political situation in Egypt evolves, there will continue to be a need to reach a consensus on the road ahead. Despite their sharp differences over how to approach the issue of political Islam and governance in the region, the US and its partners in the Gulf should quietly re-double their efforts to find common denominators that recognize first and foremost the legitimate political and economic aspirations of the Egyptian people. The United States and the Gulf have converging interests in Egypt, but these have been obscured over the last year by a sometimes nasty argument about the role of the Muslim Brotherhood. Neither the argument nor the Brotherhood are going to disappear, but the critical regional role of Egypt remains as does the need to find ways to foster its political and economic development.