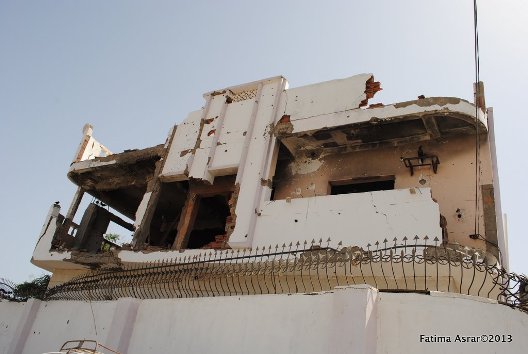 Apart from the Yemeni National Dialogue Conference that has been generating good news in the press, the country is on a rapidly deteriorating course toward uncertainty. On October 18, al-Qaeda in the Arabian Peninsula (AQAP) launched a suicide attack targeting a military installation in al-Ahwar district of Abyan governorate which killed twelve soldiers and left several others wounded. This  was the same governorate that fell under control of the terrorist group of Ansar al-Sharia during the Arab Spring uprising in 2011. Despite the liberation of Abyan from the terrorist occupation, the group still conducts terrorist acts, through planting land mines in schools, kidnapping aid workers, in addition to their usual suicide tactics against military installations and local popular committees that guard the city.

The danger of AQAP in Yemen is real, but so are the drone attacks which intensified during the Obama administration. The weapon meant to target terrorists  caused great harm to Yemen in a number of ways. Human Rights Watch issued a report on October 22 highlighting the devastating effects of air strikes. The report examined six drone strikes since 2009. Although the number of investigated cases is not a representative quantitive sample on the drone strikes in Yemen (various sources document an estimated eighty-two to ninety-two drones attacks during this period), the qualitative sample made one important point abundantly clear: no matter how precise the drones, they still generate civilian casualties, destruction, fear, trauma, motherless children, loss of income, and increasing rage towards the United States.

The report did not intend to hold the United States accountable for extrajudicial killings or its violation of Yemen’s state sovereignty (it would have been futile to highlight the latter given that Yemeni President Abdrabbo Mansour Hadi is a proponent of drones). Rather, it criticizes President Barack Obama’s administration for its failure to provide a clear legal justification for the targeted killings and calls on the US government to respond to alleged violations of international law in individual attacks. Human Rights Watch questioned the US administration’s compliance and commitment to international humanitarian law under the drone program, and questioned the legal framework for US intervention in Yemen, viewing it as a party to an armed conflict between the Yemeni government and AQAP.

President Obama’s speech at the National Defense University in May this year attempted to highlight drones as an efficient weapon of war, arguing that the precision of these weapons minimizes civilian casualties. But this instrument fails when it uses false or insufficient intelligence that leads to the killing of innocent civilians. In one of the six cases, the report sheds light on the death of a cleric who worked vigilantly to weaken the influence of AQAP by denouncing them in his sermons. In another case, a drone missile hit a minibus that killed a pregnant woman, three children, and eight other people. Not only was the intended target absent from the vehicle, but also his affiliation with a terrorist organization was never substantiated. No matter how much the Obama administration emphasizes its desire to curb civilian casualties by using drones, a trail of unintended consequences and a number of unaddressed cases fall in the policy’s wake.

Evaluating the impacts of drones is difficult in absence of concrete data and information regarding the nature of attacks, targeting, and response. The failure of the Yemeni government to acknowledge these cases and the lack of transparency on this issue threatens to offset the foundation of a democratic system though the National Dialogue Conference. Citizens will dismiss the dialogue so long as their government remains unwilling to face its responsibility towards communities affected by drones.

The United States is reticent in acknowledging the operations conducted in Yemen and therefore fails to compensate victims when damages occur. This  has generally given  the  perception that US policymakers are  indifferent towards the suffering of civilians, as if anyone in the vicinity of terrorists is fair game in the interest of US national security. The human cost of the drone program is weighing less on the consciousness of Washington, and the Yemeni government for that matter.

The sad reality is that the Yemeni government does not advocate for scrutiny of the air strikes and many argue it even actively inhibits the discussion on drones. President Hadi, a former military man, has welcomed drones with open arms, and millions of Yemenis feel powerless in the face of this unconditional embrace for Hellfire missiles. As more and more Yemenis fall victim to the policy, they  increasingly view the United States as an asymmetrical force that can only be challenged by terrorism. In the broader context of those interpreting it as targeting Muslims as opposed to terrorists, more misunderstandings and violence will inevitably follow.

The US projection of power in Yemen stokes the fires of anger and resentment in many communities even among non-extremists, that generates the mental conditioning required for recruitment. This sense of powerlessness provides AQAP with its breeding ground to challenge the security interests of the United States and Yemen—the exact opposite effect for which the drone program was born. Human Rights Watch highlighted AQAP’s ability to capitalize on the lack of accountability towards civilian casualties through AQAP’s various propaganda outlets.

As long as Yemen continues to accept drones, stability will be a remote possibility. Drones have weakened the capacity of Yemeni districts to achieve their economic potential in an already difficult economic environment. Local communities in many cities in Yemen, most notably Abyan, repudiate the presence of AQAP. The city of Moodiya, for example, has armed itself against AQAP and stopped them from entering their district in 2011. The United States could invest in these communities without a single US soldier or drone missles. This engagement does not require arming popular committees, but rather through targeted economic and education assistance that could aid these communities in defeating the conditions in which terrorists thrive.

The United States must not wait any longer to reconsider a change of policy in Yemen. Without swift action to address the issue of metastasizing extremists, there will neither be a foreseeable halt to AQAP operations, nor the subsequent drone attacks meant to stop them. The United States must find a way to empower the Yemeni government to work with its citizens and consider the prospect of working with local popular committees. A revival of democracy programs is needed, not only with civil society, but with the Yemeni government that has a fundamental responsibility to seek the wellbeing of its people, will help prevent the persistent cycle of violence.

Yemen can no longer afford to be trapped between al-Qaeda and Hellfire missiles. Yemenis need a real partnership with the United States in order to combat the challenges threatening their stability. The United States also must realize that assisting the Yemeni government with upholding the rule of law and bringing terrorists to justice will strengthen the people’s faith in the National Dialogue. It is imperative to move the Yemen-US relationship from its dysfunctional series of one night stands to a long term cooperation effort that will respect the lives and dignity of Yemeni citizens.

Image: A destroyed building as a result of fighting between AQAP and the Yemeni government in 2012, taken in June 2013. (Photo: Fatima Abo Alasrar)