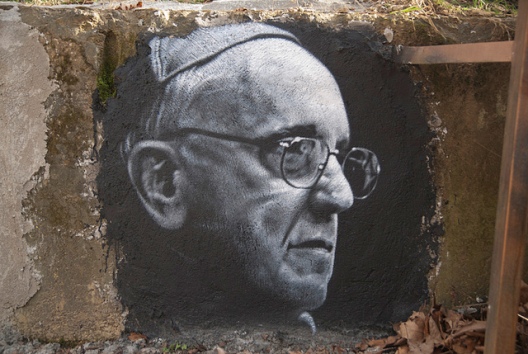 In a letter to Russian President Vladmir Putin dated September 4, 2013, and addressed to Putin in his capacity as host for the G20 meeting in St. Petersburg, one interpreted by some as a rebuke to President Barack Obama, His Holiness Pope Francis had the following to say about Syria :

It is regrettable that, from the very beginning of the conflict in Syria, one-sided interests have prevailed and, in fact, hindered the search for a solution that would have avoided the senseless massacre now unfolding. The leaders of the G20 cannot remain indifferent to the dramatic situation of the beloved Syrian people which has lasted far too long, and even risks bringing greater suffering to a region bitterly tested by strife and needful of peace. To the leaders present, to each and every one, I make a heartfelt appeal to them to help find ways to overcome the conflicting positions and to lay aside the futile pursuit of a military solution. Rather, let there be a renewed commitment to seek, with courage and determination, a peaceful solution through dialogue and negotiation of the parties, unanimously supported by the international community. Moreover, all governments have the moral duty to do everything possible to ensure humanitarian assistance to those suffering because of the conflict, both within and beyond the country’s borders.

On its face, there is nothing in the Pope’s letter that should be read as a rebuke to President Obama’s stated desire to use military force to prevent or deter the use and proliferation of weapons of mass destruction by the Assad regime. The president is not, after all, in “pursuit of a military solution.” He is, in fact, intent upon relieving the misery and terror being visited upon the people of Syria by a regime totally devoid of morality: one that has been identified by the Independent International Commission of Inquiry on Syria as fully engaged in war crimes and crimes against humanity. It is the recipient of the letter, Mr. Putin, who has been content to facilitate the “senseless massacre” inflicted on Syrian civilians by his client. And it was Secretary of State John Kerry – not his Russian, Syrian, or Iranian counterpart—who, in May of this year, proposed “a peaceful solution through dialogue and negotiation of the parties” by means of a Geneva 2 conference. As the leading provider (by far) of humanitarian assistance to the people of Syria, the United States need not feel chastened by the Pope’s concluding sentence. Mr. Putin, on the other hand, might feel shame about Russia’s paltry contribution to the welfare of Syrian refugees and others were he capable of doing so.

Still, it is the impact of the Assad regime’s August 21, 2013 chemical massacre and President Obama’s proposed response to it that overshadow the G20 proceedings and could make the Pope’s missive be seen by some as a rebuke to the president. To the extent it is seen as such it could conceivably sway votes in Congress in such way as to deny the president the authorization he seeks.

If it were the intention of the Holy Father to weigh-in on the margins of an intense American political debate for the sake of encouraging a “no” vote in Congress on a resolution that would authorize the president to use military force in Syria, it would be profoundly ill-advised. There is, of course, nothing improper about the Pope calling for a peaceful solution to Syria’s horrible travails. Neither would one expect the Vicar of Christ explicitly to endorse a military operation, no matter how carefully targeted and no matter how positively conceived in the hope of bringing about humanitarian relief to a population that has been shelled, bombed, and rocketed unmercifully, with chemical and conventional munitions alike, in a campaign having no military purpose or utility. Yet perhaps it is the “shame on everyone, equally” tone of the letter that will lead some to believe that the shameful and shameless are being put on the same plane as a president seeking to prevent and deter the further use of chemical weapons by a regime that knows no limits when it comes to atrocities.

In fact there is nothing in the Pope’s missive that President Barack Obama cannot and will not endorse. Indeed, he may take comfort in the Pope’s finding of futility with respect a military solution in Syria: something the president believes in passionately. If only President Putin and his Syrian client had the same belief the Syrian people might well expect the deliverance from evil for which His Holiness so fervently prays.