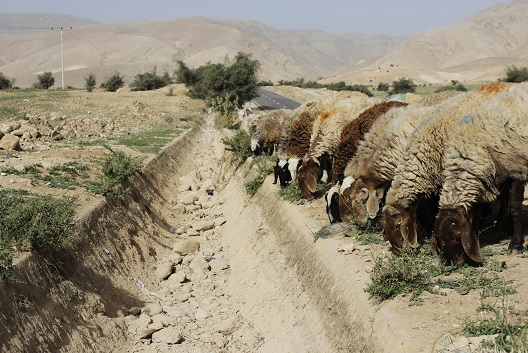 Global warming will do the Middle East no favors. Evidence abounds it will be the region that climate change will hit hardest. Summer temperatures across the region are expected to increase more than twice the global average. Prolonged heat waves, desertification, and droughts will make parts of the Middle East and North Africa uninhabitable. Where Middle Easterners will still be able to live, climate change may fuel violent competition over diminishing resources. Even though some degree of warming is inevitable, governments in the region and their international partners have done little to integrate climate change to their strategies to mitigate instability and conflict. Instead, they should brace themselves for a Middle East in which warming intensifies unrest, weakens state capacity, and provokes resource conflicts.

For an early example of warming’s damaging power, look no further than Syria. Climate change caused the generational drought that preceded the ongoing civil war there. That drought drove rural farmers into urban centers like Damascus and Aleppo, priming the populace for concentrated, large-scale political unrest. From 2002 to 2010, the country’s total urban population increased by 50 percent. While climate change certainly did not compel Bashar Al-Assad to brutally crack down on his own people, it did prompt a confrontation that might not have occurred. Climate-induced economic despair and migration worked to reinforce other salient conflict drivers including Assad’s “privatization” efforts and concentration of power that exaggerated inequality and severed the dictator’s connection to rural, recently migrated communities. As climate change causes rapid temperature increases, food shortages, and economic pain elsewhere, more Middle Eastern countries might tip over into bloodshed.

Climate-induced water shortages will be another source of conflict. When the Islamic State controlled large swathes of territory across Iraq and Syria, it wrested control of dams that provided drinking water, electricity, and irrigation to millions along the Tigris and Euphrates rivers. Ensuing clashes with Kurdish and Iraqi forces left Shiite holy cities like Karbala and Najaf without water. More than 23 million live in the river basin, and experts predict that, because of global warming, the Tigris and Euphrates will “disappear this century,” making conflict over what remains even more tempting if contested political control returns to the Fertile Crescent.

Second, oil producers will have fewer resources as oil receipts contract amid the inevitable global clean energy transition that will accompany climate action. Take the fact that worsening climate change is already driving a global transition toward clean energy. In November 2018, even while pursuing close cooperation with the Organization of Petroleum Exporting Countries (OPEC), Russian President Vladimir Putin openly declared that “$70 suits us completely,” referring to an ideal oil price for his country. Unlike his Middle Eastern partners, Putin seems to acknowledge that OPEC oil will face market competition from renewables and US shale if it reaches too high a price.

In countries where the social contract rests upon limited political freedom in exchange for subsidies and extravagant public works, there will be less money to go around, and it cannot be expected to go as far. Such is the case in Algeria, where street demonstrations have forced the country’s ailing leader, Abdelaziz Bouteflika, to step down. Protesters’ grievances are, in part, tied to the oil, which funded social benefits that buoyed youth employment until prices crashed.

While countries like Saudi Arabia have the financial capacity to likely weather the storm, worry should be aimed squarely at unstable oil producers like Iraq and Libya, which require extraordinarily oil prices to fund budgets. It is true that oil is a valuable, concentrated resource that factions compete for in the region, but it may be a necessary source of reconstruction funding once conflict abates. In the best case, foreign assistance continues to come from western governments like the United States that still rely on the global flow of oil to some degree. In the worst case, donor governments abdicate their support as the mass deployment of wind turbines, solar panels, and electric vehicles become more feasible and affordable. The consequences could be locking in the fragility of the region’s current conflict zones: Even though Libyan militias fight to control oil infrastructure now, it is hard to imagine the country funding its own reconstruction in the future unless oil returns to a higher price.

Competition Over Transboundary Resources Heats Up

Climate change might also have the Middle East’s governments warier of their neighbors. Resource scarcity within a country can provoke nationwide unrest, but competition over transboundary resources can elevate even higher to bellicose levels. Knowing that water will become scarcer, it is instructive to understand how Middle Eastern neighbors are already handling disputes over water needed for irrigation, drinking, and hydropower production.

The Nile River Basin provides one worrying example. Since 2011, Ethiopia has been constructing its Grand Renaissance Dam in a bid to become a regional electricity exporter. However, the dam will slash downstream flow to Egypt by 25 percent. Cairo alleges that the dam will interrupt water supplies to its nearly 100 million people. While Ethiopia and Egypt are currently in negotiations, Egyptian officials have been caught considering military action over the dispute as recently as 2013. The current Egyptian president Abdel Fattah el-Sisi has openly declared the dam “a matter of life and death,” highlighting its continued importance. Climate change, which threatens to disrupt the Nile’s flows, stands to make an already tense situation worse.

Admittedly, direct conflict between Middle Eastern countries has become rarer, but proxy wars are common, featuring in nearly all the region’s civil wars. Water has already featured in at least one of them: Historically, Damascus has leveraged support for the Kurdistan Workers Party (PKK), a group loathed by Istanbul, to force Turkey to share Euphrates waters to Syria. Nearly every country in the Middle East from Morocco to Iran share water resources with a neighbor, and some have little freshwater of their own. What has played out between Egypt and Sudan and between Turkey and Syria could become a frequent feature of Middle Eastern politics as water becomes even more scarce.

Policymakers must understand that some amount of warming has already taken place, and more is inevitable. They should seek to “de-link” conflict from climate change to avoid global warming’s nastiest effects. The multiplier effect that climate change will have in the Middle East is not limited to the examples highlighted. For instance, what has happened in Syria might repeat in any other repressive Middle Eastern country if environmental conditions converge with political and economic ones.

First, climate adaptation projects targeted at the most climate and conflict-prone countries can go a long way in preventing violence-inducing scarcity before it occurs. Specifically, the UN’s Green Climate Fund should expand its Middle East projects that focus on the climate resilience of water, riparian coastal resilience, and arid irrigated agriculture. International donors should also increase limited funding to the World Bank’s Global Environmental Facility, which funds sustainability projects and resource management, and to the CGIAR consortium, which brings together groups to share global research and best practices on food security. Second, donor countries like the United States should also take an active role in mediating disputes over shared climate-vulnerable resources before they tip into violence.

Last, the United Nations Framework Convention on Climate Change should redouble its efforts on innovation with a specific focus on deploying technologies in the Middle East that would alleviate resource scarcities before they arise. For example, Mission Innovation, which gathers the world’s largest economies in a commitment to double clean energy research and development spending, could focus some of its efforts on desalination in the Middle East. More affordable desalination and less water-intensive agricultural practices can help divorce food and health outcomes from warming. Climate change will take place over decades, but policies adopted today will determine what role it will play in the Middle East. Policymakers need not leave it to fate.

Sagatom Saha is an independent energy policy analyst. His writing has appeared in Foreign Affairs, Defense One, Fortune, Scientific American, among other publications. He is on Twitter @sagatomsaha.

Image: Photo: Sheep graze next to a dried out gulley usually flowing with natural spring water in the Palestinian village of al-Auja, near the West Bank city of Jericho March 7, 2014. The Middle East's driest winter in several decades could pose a threat to global food prices, with local crops depleted along with farmers' livelihoods, U.N. experts and climatologists say. Varying degrees of drought are hitting almost two thirds of the limited arable land across Syria, Lebanon, Jordan, the Palestinian territories and Iraq. To match analysis CLIMATE-DROUGHT/MIDDLEAST REUTERS/Ammar Awad