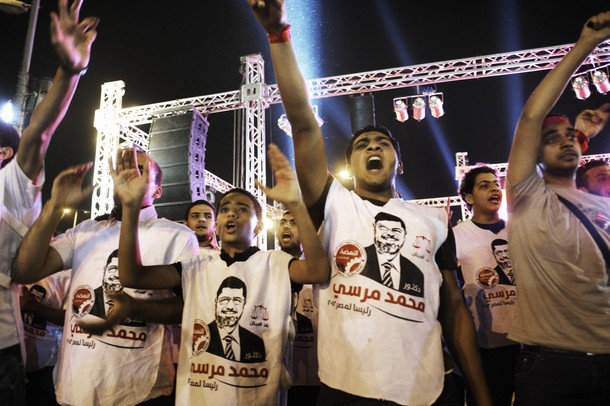 Predictions that Egyptians will head to the presidential poll in large numbers on May 23 and 24 are firm and consistent, but forecasts of how they will vote diverge significantly.   Opinion polls have been all but useless, with each of the four main candidates (Morsi, Aboul Fotouh, Moussa, Shafik) strongly in the lead in one poll or another over the last week—and the poll results in most cases have obviously been influenced by the group that conducted the poll.  Some have even shown in the lead leftist candidate Hamdeen Sabahi, who admittedly recently picked up support from those disenchanted with Aboul Fotouh or Moussa after their debate.

The hopeless tangle starts to unwind, however, when one considers some of the principal factors that will affect the vote.  One question is whether political mobilization or individual opinion will prove to be a stronger factor.   Only one of the candidates—the FJP’s Morsi—has an enormous, disciplined party structure behind him to mobilize voters and place candidate agents and campaign volunteers at every single polling place.  An FJP activist explained the system to me:  there are some 50 million Egyptians living in towns and villages that average about 10,000 residents.  In each of these, the FJP has recruited 100-200 committed members.  Each of these members is expected to be able to reach out to at least 10 other persons to vote for Morsi; these people will be heads of families and able to persuade their family members to vote likewise.  The system is clear and simple, and the FJP is reasonably confident that it can get Morsi a majority or close to it in the first round.

Shafik has no party, Mubarak’s National Democratic Party (NDP) having been dissolved after his removal.  The question now is whether the old NDP networks are reviving to support Shafik and, if so, how effective they will be.  An Egyptian journalist who visited the small city of Beni Suef on May 17 recounted how the FJP and NDP were competing for influence.  He listened to the mosque imam’s Friday sermon, which did not name names but clearly implied that a pious voter should choose Morsi.  When the imam came out into the main square after prayers, he was confronted by the local mayor and several other senior municipal officials—all of them were ex-NDP, as opposition was barred from the last set of municipal elections–who complained vociferously that the imam had no right to use the pulpit to give a political endorsement.  They then proceeded to endorse Shafik publicly and broadcast around the village that any right-thinking person would vote for him.

The Moussa and Aboul Fotouh campaigns are not believed to have large mobilization capabilities, although it is still possible that Salafis will come out strongly for Aboul Fotouh; they certainly were effective mobilizers for their own candidates in the parliamentary elections.  Short of this, Moussa and Aboul Fotouh are expected to capture votes based on their own reputations.  Moussa has extensive name recognition due to his years as a foreign minister popular for his tough talk on Arab causes and later as Arab League Secretary General.  Aboul Fotouh is less widely known, but many respect him as a principled Islamist able to work with non-Islamists.  Still, such factors seem weak when weighed against the hard realities of the Brotherhood’s vast voter outreach apparatus.

Another question is the rural versus the urban vote.  Rural areas almost always have a higher turnout in Egypt’s elections, leading analysts to forecast that 55-60 percent of the vote will come from small towns and villages—a strong point for Morsi and possibly for Moussa.  Also, rural voters traditionally have voted based on mobilization rather than individual preferences.

Campaigns are also wringing their hands now over what is likely to happen in the first round—where it is possible for a candidate to win outright with a simple majority—versus the expected second round.  Morsi seems to be the only candidate that could possibly make it across the threshold in round one, although few predict he will actually do so.  One FJP activist worried that “Morsi’s best chance is to surprise everyone and win in the first round.  If he does not but makes it into the second round, all the others will unite against us around the other candidate.”  The FJP’s fear is that the other candidate in the runoff will be Aboul Fotouh—a renegade Muslim Brother—leading to an “extremely uncomfortable” struggle.

An activist from Amr Moussa’s campaign had a different set of worries.  Many non-Islamist voters are unenthusiastic about Moussa, although he probably has the best shot at beating Morsi, because they see Moussa as “filul” (old regime) or too willing to compromise with Islamists.  Many have been cagey, pledging their support to both Moussa and Shafik, or have told the Moussa campaign outright that “I will vote my conscience in the first round” (vote for Sabahi, for example), “but I’ll be with you in the second round.” These tactics are giving Moussa’s campaign good reason to fear that he might not make it to the second round.

Indeed, Hamdeen Sabahi might turn out to be the Ralph Nader of this race.  I will make one prediction:  whatever the polls say, he will not be elected president of Egypt.