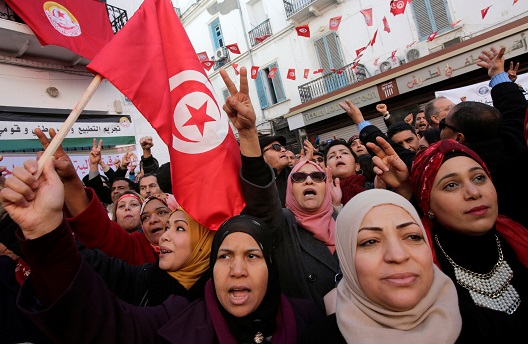 While women in the Middle East and North Africa still face critical challenges, it is worth noting recent progress on the occasion of international women’s day. Many countries across the Middle East have taken recent steps to codify certain rights for their female citizens. With the introduction of quotas for their legislative bodies, female representation in parliament in Algeria, Morocco, and Tunisia has jumped since 2011. Last year, lawmakers in Tunisia, Jordan, and Lebanon repealed provisions in their penal codes allowing rapists to escape punishment by marrying their victims. Even Saudi Arabia has taken a progressive step and issued a royal decree in September 2017 allowing women to drive.

Tunisia, in particular, has introduced significant legal reforms toward equal rights for women. In June 2017, the Tunisian parliament passed a landmark law criminalizing domestic violence against women. Two months later, President Beji Caid Essebsi overturned a law that banned women from marrying non-Muslim men. Many anticipate that a proposed new bill that would enable Tunisian women to receive equal inheritance with men will cement Tunisia’s place as a leader on women’s rights in the Arab world. Yet broad support within Tunisia for the inheritance bill remains lacking. State-led reforms can play a crucial role in furthering women’s equality and rights, but it is important to recognize that these reforms take place in the larger context of a debate over the religious or secular identity of the state. In this environment, “revolutionary” change will require a longer-term effort—one that must take place in the social as well as the legal realms—to redress longstanding inequalities.

Tunisia’s 2014 constitution codified equality for women. Laws criminalizing domestic violence and eliminating the rape loophole (where rapists could marry their victims) are rooted in the constitution’s Article 21, which provides equal rights and equal protection under the law similar to clauses in constitutions across the democratic world. However, Article 46 goes a step further than those in many established democracies in its commitment to promote and develop women’s rights, to include a “guarantee of equality of opportunity” and aims “to achieve equal representation…in elected councils.” Consistent with this commitment, women are better represented in the Tunisian Parliament, at 31 percent, than in legislative bodies in the United States, Britain, and Canada. Perhaps more significantly, Tunisian women exceed 31 percent representation in the economic and foreign affairs committees, and 34 percent in the power committees, arguably the most influential legislative committees. In the United States, comparatively, less than 14 percent of members in the foreign affairs committees and less than 23 percent of members in the armed services committees are women. Many identify Tunisia as a “pioneer” in the region for women’s rights due to its progress.

Headway toward female equality in Tunisia, nonetheless, faces many challenges, with Tunisia’s inheritance law being a prime example. Since the enactment of the 2014 constitution, female policy-makers have been among the many groups warning that the inheritance law is a unique challenge because it “touches upon the very nature of the Tunisian society.” President Essebsi announced plans to review the inheritance law on Tunisia’s National Women’s Day in August 2017, at which time women and men alike spoke out on both sides of the matter. Whereas Tunisia’s highest religious establishment, Diwan al-Ifta, supported the reform, the prominent Sunni religious establishment Al-Azhar categorically rejected it as contradictory to the Quran. Political opponents of the ruling Islamist political party, Ennahda, joined in accusations that the proposed law reflects a foreign agenda and is a distraction from more important issues facing the country, such as unemployment and a struggling economy. Consistent with Essebsi’s August 2017 pledge, proposals to reform the inheritance law are now ready, but their presentation has been postponed until after municipal elections in May. Moreover, legislative change may not be the greatest obstacle to tangible reform.

A recent poll by the International Republican Institute provides insight into public opinion in Tunisia regarding recent equality laws. In total, 78 percent of respondents (both men and women from a wide age range) said they believed that the government is promoting policies and programs to support women’s rights in Tunisia. Yet not all respondents were supportive of these policies. For instance, 65 percent of respondents were strongly opposed to Essebsi’s decree allowing women to marry non-Muslim men. The poll results suggest that new legislation alone on these inherently social matters is insufficient to shift social norms surrounding gender equality.

The poll results reflect a larger ongoing debate in Tunisia about the identity of the country. While it is easy to overstate the divide between religion and secularism in Tunisia, it is relevant as the country, seven years after the so-called Arab Spring, continues its democratic transition. The country’s 2014 constitution legally defines Tunisia as a civil state. Nonetheless, the legal system includes both civil and religious laws, and it is clear that many Islamic institutions reject the proposed inheritance law on religious grounds.

The experience of the Islamist party Ennahda is indicative of the push and pull between religion and secularism in Tunisian politics. In 2016, the party declared it would separate Islam and politics, announcing that, “There is no longer any justification for political Islam in Tunisia.” Since 2011, Ennahda has exhibited a pattern of political compromise and survival at the possible expense of grassroots support.

“State-led feminism” is not a new phenomenon in Tunisia and brings with it unique challenges. Indeed, many criticized former President Habib Bourguiba for similar reforms that stifled rather than strengthened grassroots women’s movements. Some have suggested that the proposed reforms by Essebsi are aimed at dampening social unrest, especially ahead of municipal elections this year and presidential elections in 2019. In addition, state-led feminism raises questions of political will and legal enforcement. New legislation outlawing violence against women, for example, will require significant funding to be fully enforced. Ultimately, progressive laws on the books may have little to no impact without consistent enforcement across all of Tunisia.  Going forward, reform initiatives by Tunisia’s political leaders will need to be met with sustained outreach and dialogue with the public.

To be sure, legal reforms are a necessary step towards codifying equal rights in Tunisia. Top-down reforms can be a first step, but subsequent social change is far from a guarantee.  Therefore, recent reforms on women’s rights should be met with cautious optimism as well as a sustained effort at a dialogue with all elements of society–both men and women–that makes the case for these necessary reforms. Ultimately, these reforms present Tunisian civil society with an opportunity and momentum to engage with the whole of Tunisian society to further the women’s rights agenda in a region long-criticized for inequality.