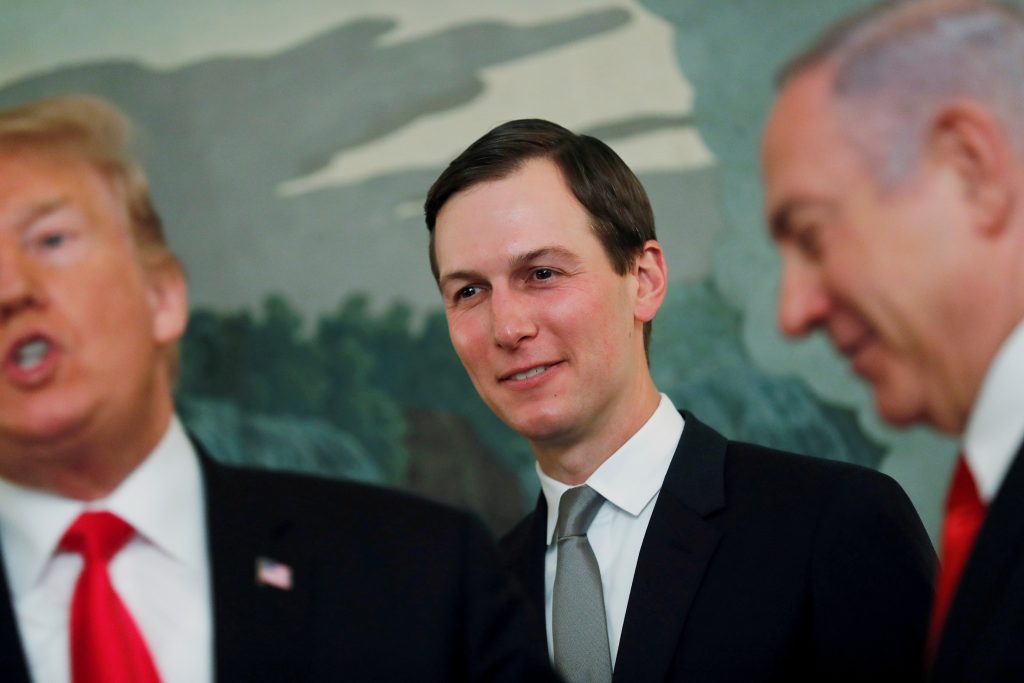 The US-sponsored “Peace to Prosperity” workshop will convene in Bahrain on Tuesday June 25 and Wednesday June 26 to “discuss strategies and galvanize support for potential economic investments and initiatives that could be made possible by a peace agreement” between the Israelis and Palestinians. Although the US delegation will be led by Treasury Secretary Steve Mnuchin, the plan’s architect is White House adviser Jared Kushner. They will be joined in Manama by officials from a few Arab states, a sprinkling of business people and a few working level representatives of international organizations. The Palestinians have rejected participation and the Israelis have not been invited.

The plan released by the White House on Sunday has the look of something junior McKinsey people would put together as a training exercise, replete with smiling Palestinian children, earnest students, and ambitious-looking business men. A number of the photos are recycled from the former USAID program’s materials despite the closure of that program by the United States. The projects described are familiar to anyone who has been involved with Palestinian economic development from the past two decades.

Many experts have critiqued the ideas in the plan. Others have demanded the “political” side of the so-called Kushner plan be released and hashed out before turning to the economic plan. They miss the point.

This workshop is not designed to advance the peace process. The US brings no resources to it. The recommendations are aspirational at best. The Trump administration has long known that the Palestinians would reject participation in the workshop based on their belief that the key political issues need to be addressed and resolved first. The Israelis are preoccupied with domestic politics. So why have this meeting in Manama?

Meanwhile, the Trump team can pursue the genuine objectives of its policy toward Israel and the Palestinians. These are clear: protecting Israel’s security and independence of action, enhancing the ability of settlers to live in the West Bank and other occupied territories (Golan Heights) without any interference, and making sure that the Palestinian leadership is weakened further.

The workshop is destined to fail, whether due to lack of any real commitments of funds, lack of participation by key players, or not taking into account the realities of the occupation on the ground that prevent economic development. But the “failure” of the Manama workshop will be success for the Trump strategy. It will permit Kushner and his colleagues to claim that they tried their best to address the situation and allow them to blame others for not cooperating.

They will be justified in putting off any engagement on the bigger political issues until at least late in the year by the prospect of Israeli elections and government formation. And that’s making the generous assumption that there is some genuine US intention to pursue an agreement on the key political issues in the conflict. Meanwhile, there will be ample time to establish new facts on the ground, (Israeli settlements, annexation of Palestinian territory) to cement Israeli interests. It’s not far-fetched to recognize this as a deliberate US “peace process” strategy.

One doesn’t need to agree with this strategy to recognize its effectiveness and ingenuity. The Netanyahu government gained enormously from the unilateral peace process that the administration has pursued so far: transfer of the US embassy to Jerusalem and recognition of Jerusalem as Israel’s capital, recognition of the Golan Heights as Israeli territory, along with a concerted effort to weaken the Palestinian Authority—closing of the Palestinian diplomatic mission in Washington, assistance cuts, closing of the US Consulate in Jerusalem which was widely seen as an embassy to Palestine.

So let’s not get hung up on whether the level of participation in Manama is up to par or whether certain parties boycott it. Let’s not worry that the Gulf Arabs are unlikely to keep any pledges they make in Manama. Don’t be concerned that the “plan” is a rehash of former plans and even a description of some recently terminated USAID projects.

The Manama workshop is not part of a serious peace process. It is not really even about Palestine or Palestinians. It is one minor element in a concerted effort by the Trump administration to wholeheartedly support the policies of right-wing Israelis and to realize the vision of some of their influential supporters in the United States. Success is at hand.