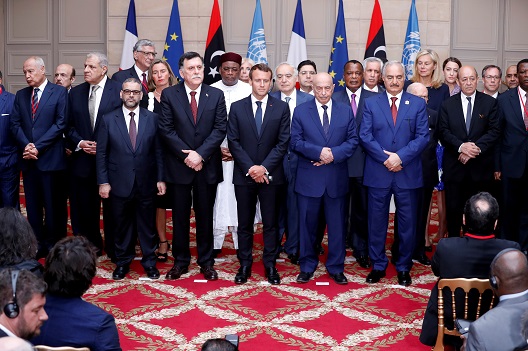 Whereas the ambitions of competing warlords fan the flames of conflict and consume the country’s oil resources, envoys from the UN and West to Libya continue to congratulate themselves for having said much but done little. In the balance hangs not only the success of those diplomats’ missions, but also the very future of Libya as a functioning state.

Diplomats throughout the region and world commend each other, received recognition, awards, and promotions for conceiving the so-called Libyan Political Agreement (LPA). Despite the high praise, the 2015 agreement was repeatedly violated by its own drafters and by the members of the government that it created. What many fail to admit is that the last piece of diplomatic wrangling that has had any lasting meaning was United Nations (UN) Resolution 1970, which called for armed intervention against Qaddafi in 2011. In the seven years since, millions of dollars and thousands of man-hours dedicated to resolving the seemingly never-ending struggle have done little more than pad the resumes of diplomats and encourage NGOs to apply for more funding.

In one example, the authors are aware of a phone call by a European diplomat who called a Libyan politician and thanked him for his role in supporting the LPA. This ambassador indicated explicitly in this phone call that his career in the ministry of foreign affairs has taken off as a result of his role in the LPA.

Long-time observers of the UN in Libya have noted that such attempts have been ineffective, if not incompetent. From the beginning, each UN envoy would make proposals, solicit agreement, and then change plans on the fly. In one instance, after reaching an agreement for a three-member Presidential Council (PC), Bernardino Leon abruptly changed his mind and created a dysfunctional six-member PC in addition to three Ministers of State.

Many plans, no results

Last year, UN Special Envoy Ghassan Salame presented yet another roadmap with clear steps and benchmarks. It was hailed at the UN and by Western diplomats as a great leap forward. None of these diplomats would admit that some aspects of Salame’s plan actually conflicted with the previously negotiated LPA.

Specifically, Salame proposed that a new PC would be selected by the Tobruk-based Parliament. In a response to concerns that his roadmap would violate the LPA, Salame simply said he was more concerned by the spirit of the LPA and not by its letter. After intense meetings in Tunis and elsewhere with tens of Libyan politicians, foreign diplomats, oligarchs, and influencers, Ghassan Salame steadily but quickly abandoned the proposal.

When none of these proposals seemed to work, Salame floated the idea of skipping the step of negotiations and heading straight to a National Conference that would bring together all Libyans to sit down and resolve their differences in an Afghani-style Loya Jirga. The suggestion again was welcomed by UN and Western diplomats as a stroke of genius. Libyans who have become skilled at taking advantage of UN proposals that offer free travel, food, and five-star accommodations attended conferences and organized meetings to discuss the proposal and prepare for it. After much time and money spent peddling the conference, the idea is now dying out.

The French have come up with yet a new “road map.” Except for the Italians, UN and Western diplomats hailed this French “breakthrough.” Heads of the four leading factions within Libya came to a last-minute summit at the urging of French President Emmanuel Macron. Seemingly, getting the leaders in the same room was cause for celebration in the West. However, the four Libyan delegates refused to sign the agreement and the event instead become a race to prove non-compliance to their respective Libyan supporters.

Khaled al-Mishri, the Chairman of the High Council of State, was quick to reassure his supporters that he had not spoken directly with Khalifa Haftar, the head of the Libyan National Army. Aguila Saleh Issa, the President of the House of Representatives, declared his Tobruk-based government as the only “legitimate” government in Libya, despite the fact that the Paris agreement expressly called for its dissolution.

Despite the fact that the entire summit has largely been ignored by the participants, diplomats are happy to focus on a desire to hold elections within a matter of months in a country that, despite significant oil reserves, quite literally cannot keep the lights on.

No free and fair elections can be held in a country that lacks election laws and a constitution. In addition to missing those critical documents, elections are made more difficult by the fact that the country is heavily divided.  Most of the eastern region is controlled by a warlord who would readily assassinate any opposing candidate, the western region is dominated by the Madhkhali sect  that considers voting an act of heresy, and Libya’s southern provinces are controlled by armed African groups.

The West: Turning a blind eye

Despite the support from the West, the GNA has done little to convince Libyans that it is anything other than a corrupt body whose members receive hefty salaries and perks that surpass those of Western diplomats sitting across the negotiating table. The GNA’s funds—and hence corruption—come from being the sole administer of the country’s external finances, including large oil receipts.

The GNA comes up short as a legitimate governing body for Libya not only in their shady financial dealing but also in creating a secure and safe country. Rather than raise a national army, one that could be used to create some semblance of a Libyan institution, the GNA relies on a number of militias that operate deeply in the illicit economy while ignoring human rights abuses, much less Libyan law.

The absence of a security force has allowed Libya to be the main launching pad for migrants going to Europe. Recognizing the total impotence of the GNA, Italy created a mechanism whereby EU funds would be channeled to a militia leader, Ahmad Dabbashi, who was given an official title and was tasked with stopping smugglers. The authors were told by a high-level EU official that the French were not happy with the arrangement and encouraged other smugglers to oppose Dabbashi. This inter-European rivalry and discord is escalating with devastating effects on the Libyan political process.

The GNA is also responsible for reappointing holdovers from the Qaddafi years to security positions. The same security apparatus that was once responsible for terrorist attacks against Europeans and Americans during the Qaddafi era is now being reassembled. Despite this indiscrete corruption and ineffectiveness the West still clings to the GNA as the legitimate government of Libya.

The failure of the LPA to bring peace and security to Libya allowed other spoilers to thrive.  Early this month, Ibrahim Judhran, another warlord in Eastern Libya who was once the head of the oil field security force, sought to wrest control of significant swaths of Libya’s Oil Crescent from Haftar. He managed to drive off all of Haftar’s forces in a matter of days. Only when foreign airpower was brought in, did Haftar manage to drive the attackers back.

Judhran was tempted to repeat his prior success in 2013 when he managed to extract money from the Tripoli Government and recognition from the UN. That attempt to seize Libya’s oil and gas causing $68 billion in revenue losses netted him a close and warm relationship with the UN special envoy Martin Kobler who agreed to allow Judhran to appoint a representative to the then newly-formed GNA. Khalifa Haftar is another warlord who was rewarded for his war crimes by the UN and Western powers by considering him a legitimate fighting force and allowing him to name a representative to the GNA despite his rejection of the LPA and elections.  Last month, Haftar capped his criminal activity in Libya by announcing that he will keep control of all oil and gas fields and terminals in eastern Libya and that he is entitled to his own share of the proceeds.  Haftar and Judhran are prime examples of how the UN rewarded spoilers and criminals in Libya.

As a result of all the above, the LPA, elections, and the Paris initiative are all clinically dead. It is now time to prepare for the two remaining options: A military solution that would bring victory to one of the warring factions or splitting Libya along the ancient Cyrenaica/Tripolitania lines.  With armed groups in western Libya remaining fragmented, the former is not likely. Therefore, those in eastern Libya who have wasted no opportunity to work for this secession and called for Haftar to assume power should be granted their wish. The population of western and southern Libya has been claiming that they long for a modern and democratic state. They should be allowed to put their claim to test by voting for a new constitution, parliament, and government.

This path to partition the state is the logical and realistic conclusion to ill-conceived policies, missteps, corruption, UAE/Egyptian influence, Western infighting, and appeasement of war criminals and tribal leaders. Partition is not an easy or a preferred way forward. Absence of a military solution, partition seems to be the only way forward.

Emadeddin Muntasser is an author, political analyst, and TV commentator. He is a founding member of the Libyan American Public Affairs Council and the Democracy and Human Rights Foundation.

Mohamed Fouad is a Libyan political analyst and TV commentator. He has extensive knowledge of Libya’s intricate web of tribal and political alliances, history, and conflicts.

Image: French President Emmanuel Macron, Libyan Prime Minister Fayez al-Sarraj, Khalifa Haftar, the military commander who dominates eastern Libya, and the participants of the International Conference on Libya listen to a verbal agreement between the various parties regarding the organization of a democratic election this year at the Elysee Palace in Paris, France, May 29, 2018. Etienne Laurent/Pool via Reuters TPX IMAGES OF THE DAY