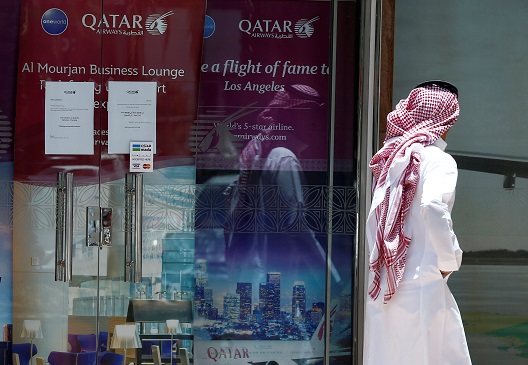 Early on Monday morning, a coordinated isolation of Qatar took place in the Gulf Cooperation Council region, and beyond. While it began with Bahrain severing ties, the power behind the moves was clearly Saudi Arabia, with strong Emirati backing. The isolation was rather complete: Riyadh, Manama, and Abu Dhabi requesting all Qatari nationals to depart their territories; a closing of land links between Qatar and Saudi Arabia; and an ending of flights, as well as a closing of airspace. Other countries like Egypt joined in, severing ties and closing its airspace and seaports to all Qatari vessels, though it is not clear if it was expelling Qatari nationals. The situation is unprecedented—but the outcome seems rather inevitable.

It is rather straightforward as to how we got here. The GCC has been dominated by Saudi Arabia since its founding, and it defines the ‘center-ground’ for GCC politics in terms of foreign policy. That does not mean the center-ground is good or bad: it only means that Saudi dominates how it is defined. There are sometimes differences of opinion with Riyadh on issues pertaining to regional policy—for example, Abu Dhabi backs slightly different constellations in Syria than Riyadh does, and Muscat is quietly far more neutral on many issues within the region.

But Doha is different. Qatar is a small state that has been able to punch above its weight by leveraging its large wealth into financial investments, and media enterprises—significantly, the Al Jazeera network, but also newer entities like The New Arab (al-Araby al-Jadid). Putting its largesse into foreign policy in ways that conflicted with particularly Saudi Arabia, but also the United Arab Emirates (UAE), was always going to be a collision course navigation. It is a collision course that led to a rift back in 2014, with ambassadors being withdrawn and a war of words over the airwaves—but the rift was papered over, and Riyadh and Abu Dhabi presuming Doha would do more thereafter to assuage Saudi and the UAE. Today shows that they are no longer satisfied.

Here is the rub of the issue. Since 2012, Riyadh and Abu Dhabi, the larger powers in the GCC, have felt Doha was something of a loose cannon, especially over support of the Muslim Brotherhood in different countries, including the hosting of non-Qatari MB figures on its soil, and friendlier interactions with Iran as compared to Saudi and the UAE. The UAE and Saudi Arabia have significant differences on a number of issues, including when it comes to the Brotherhood. But Saudi Arabia and the UAE are far closer aligned on the issue of the Brotherhood than with Doha. Both Abu Dhabi and Riyadh regard Iran as a huge threat in the region. Doha’s views on both of these issues are different – but the power quotient is not in Qatar’s favour.

Up until recently, the feeling among Doha’s critics was that Doha’s ‘irregularities’ on the issue would moderate over time, particularly after the very public rift in 2014. That feeling is now gone, and what we have seen unfold over the last few days is due to a critical mass in Riyadh and Abu Dhabi having become certain that Doha will not get in line except through radical action.

This happens at the same time as another important development: a Trump White House. No-one expects Washington to openly back these specific moves against Doha—indeed, it is not clear that Washington had the full details in advance, particularly around timing. But following Trump’s visit to Riyadh and his more open embrace of Saudi Arabia as one of the key powers in the region, there is certainly an expectation that at the very least, Washington will demure and stay distant from the affair, probably expecting it to be wrapped up relatively soon, in Saudi’s favour. Doha, in that regard, despite the presence of a significant American military base in the region, is on its own.

The question becomes: what is the likely outcome? And here, the answer is rather inevitable. There is a great deal the 21st century can offer small countries for them to punch above their weight, through technological means. But there are some things that it cannot provide. Qatar depends on the land access point with Saudi to import anything on the ground—and it literally has no other land border. Doha depends massively on imports—that is simply not something it can survive without. Qatar also needs unfettered airspace access for it to be the airline hub it wants Qatar Airways to be—it has no such access now from the UAE, Saudi Arabi and Bahrain, and no one in the UAE, Saudi Arabia, and Bahrain will be able to fly directly to and from Qatar until the crisis ends. There are no allies that Doha can count on to fill the gap in that regard at all. Iran cannot compensate, even if that was an option in the first place. Turkey, which has some synergies with Doha on certain foreign policy issues (notably the Brotherhood question), has already taken a public position that, like the United States, shows it wants to play the role of mediator, rather than come out against Saudi.

As such, the question of whether or not Doha will acquiesce is probably moot – it is more likely about how and how quickly. The balance of power simply is not in Doha’s favour at present, and the room for manoeuvre appears quite minimal.

Any reconciliation deal will probably involve the following: the departure of non-Qatari Brotherhood supporters from Qatar altogether (perhaps with exceptions whose public profile would diminish dramatically, such as Yusuf al-Qaradawi); the restructuring of Qatari media (which could mean ending The New Arab altogether, though Al-Jazeera may survive in a particular form); an ending of Qatari moves across the region that depart from Saudi positions; and a larger focus on strengthening financial controls vis-à-vis private funds leaving Doha and going to groups that Saudi deems unacceptable. In short, the space for Doha’s ‘irregularities’ with regards to Saudi Arabia in general is likely to shrink, tremendously.

Potentially, reconciliation could take place quickly, because the issues of disagreement are so well known. But it should be clear: this is a reconfiguration of the GCC region, and a reconsolidation of Saudi power, with possible impacts far beyond the GCC. Quite what those impacts are belongs to discussions around unintended consequences, which have yet to be determined.