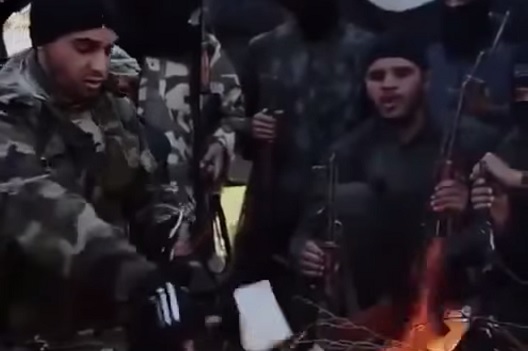 A Q&A with Dr. James Noyes, Part I of III

In his address at the UN General Assembly, President Barack Obama condemned the extremist ideology of the Islamic State (also known as ISIS), saying that “the future belongs to those who build—not those who destroy.” Ironically, this is precisely the long-term threat: more than simply a terror group, the Islamic State is a state-building project. The radical jihadist group is fighting to create a caliphate modelled on the early years of Islam, carved from the lands of eastern Syria and western Iraq. The attempted construction of this so-called Caliphate is entwined, of course, with horrific destructive force, but what may seem indiscriminate from afar is often following a premeditated agenda to define the frontiers—theological as well as military—of the Islamic State.

A signature of the Islamic State’s violent expansion into Syria and Iraq has been the targeted defilement of certain sites of religious and cultural significance—a deliberate, systematic program of iconoclasm. During the capture of Mosul in June, for example, image-breaking accompanied military advancement, as fighters quickly beset upon the tombs of the prophets Seth, Jonah, and Daniel. The razing of holy sites was an essential element of the campaign, not an afterthought or an accident of warfare.

How should we understand this program of iconoclasm? And what can it tell us about ISIS’ political agenda?

James Noyes, author of The Politics of Iconoclasm: Religion, Violence and the Culture of Image-Breaking in Christianity and Islam, has argued that “the destruction of religious and cultural icons has gone hand in hand with the political construction of the modern State.” The Hariri Center reached out to Dr. Noyes to help situate ISIS’ iconoclasm in its historical context, to help us understand a group for which image-making and image-breaking are so central, and to shed light on how analogous programs of invasive iconoclasm tend to play out.

As background to the discussion, Dr. Noyes has furnished two essential primers: What is the theological basis for iconoclasm in Islam? And What is the historical lineage for ISIS’ brand of iconoclasm?

• Dr. Noyes, Why is iconoclasm an important lens to view ISIS? Why should we see the destruction of Shia mosques as more than the aggression of a breakaway Sunni group cleansing the symbols of the Shia-aligned governments in Damascus and Baghdad?

It is important to understand that the iconoclasm of ISIS is not a mere by-product of a political struggle between Sunni militants and the governments in Damascus and Baghdad. As you rightly say, today’s iconoclasm is not an accident of warfare. It is at the heart of a theological and territorial struggle which stretches back to the origins of Islam—with Syria and Iraq situated on the faultline of that struggle.

A good example of this can be seen in the apparent destruction by ISIS of the Uwais al-Qarani Mosque in Raqqa last year. Unlike some of the recently-destroyed mosques in Mosul, this building was not ancient. It was built by the al-Assad family, supported by the Ayatollah Khomeni, to honor the tombs of two seventh-century Shia martyrs from the First Islamic Civil War. Like many such places in Syria, these tombs had become important shrines for pilgrims from Lebanon, Iraq, and Iran. Thus the destruction of the mosque was a powerful statement on many levels: a theological statement against shirk, a recalling of the historical origins of division between Sunni and Shia, and an attack on the political ties between Syria and Iran. As ISIS fights to define the frontiers of its co-called caliphate, iconoclasm represents a means of bridging the principles of theological and political unity.

Raqqa, Karbala, Samarra, Kufa, Damascus—these are the Syrian and Iraqi cities which have stood on the Sunni-Shia faultline since the death of the Prophet Muhammad. They are the sites of important Shia shrines, and it is no accident that they are now the prime targets of Sunni militants. Since the American-led invasion of Iraq, a number of these sites have been attacked, including the Imam Ali Mosque in Najaf in 2003, the al-Askari Mosque in Samarra in 2006 and in 2007, and the golden-domed Imam Abbas Mosque in Karbala in 2007. Many of these attacks were organized by al-Zarqawi’s predecessors to ISIS, and involved foreign mujahideen. And this pattern is now recurring in the present day: Shortly before taking Mosul in June 2014, ISIS attempted a repeat of the attack on Samarra and the al-Askari mosque.

• In addition to shrines, tombs, mosques, and other places of religious significance, ISIS has boasted the destruction of non-religious objects of cultural significance—statues of nationalist poets, museums, libraries, and, famously, a berm representing the Sykes-Picot boundary. How do you read these iconoclastic-like acts?

First, we should note that it is incredibly difficult to verify the reports of many of these attacks. Sometimes a YouTube clip which claims to show an attack on a named mosque will be reposted from a video which has passed through many hands, and actually features an entirely different building. I have not been to Syria for a few years and, like almost everyone in the current climate, depend on the internet for my sources. YouTube, social media like Twitter, and online forums can be useful, but they are also often providers of misinformation and propaganda—on both sides of the conflict.

This is particularly the case with the Islamic State—as a no-go zone for NGOs, academics, and journalists, it is simply impossible to have the range of observers and voices needed to conclude whether a statue like that of the poet Othman al-Musili has been destroyed or is in “safe keeping.” I find that the mainstream media has little to contribute on this topic, with articles tending to be written by non-experts who often ask surprisingly few questions of their sources.

Having said that, it is possible to find examples of good investigative journalism conducted by independent scholars. The best resource detailing acts of religious and non-religious iconoclasm is, in my opinion, the Conflict Antiquities blog. Its owner, Sam Hardy, consistently demands robust verification of his sources before making claims. For an example of this, see “Double, triple, quadruple-checking: is this evidence that the Shrine of Sayeda Zeinab has been destroyed?”

We should also note that since the nineteenth century, the word iconoclasm has been used in a non-religious context, namely to describe the destruction of works of art—attacks including Velázquez’s “Rokesby Venus” by Mary Richardson, the Michelangelo Pietà by Lázlo Toth, and da Vinci’s “Virgin and Child” by Robert Cambridge. Clearly such examples blur the boundaries between the religious and the secular, although it is interesting to note that the targeted paintings and statues often have a religious or quasi-religious subject-matter, and the attackers have often objected to the kind of cultural association being made with the object (such as the association of the female body with objectified beauty).

Having said that, these blurred boundaries between the religious and secular are particularly evident in the cases you cite concerning ISIS. For example, in a well-known video showing the demolition of a checkpoint marking the border between Syria and Iraq, the speaker declares that the mujahideen are not fighting “for earth” or the “imaginary borders of Sykes-Picot,” but rather to make the world whole for Allah. He states that after Syria, Iraq, and Jordan, the objective of the Islamic State is to take al-Quds—Jerusalem—and to “free Palestine.” When he points to the demolished checkpoint, and to the discarded Iraqi flags and badges of the border police, he describes them as both kufr and shirk.

This represents, then, a conflation on two levels. First, as with the teachings of ibn Abd al-Wahhab, the kafir and the mushrikun are viewed in the eyes of ISIS as the same thing; second, non-religious buildings and symbols such as police stations and flags are considered to be signs of shirk as much as mosques and shrines. It is in this context that other videos of Islamic State mujahideen burning their passports can be understood: these official documents, like the checkpoints of “imaginary borders” and the statues of nationalist poets and UNESCO-supported libraries are considered to be symbols of shirk and kufr.

The conflation of religious and non-religious imagery is an established feature in both Syria and Iraq. On street corners and in private homes in Damascus, posters of Bashar al-Assad and his father have long been ubiquitous—as are posters of Shia martyrs in Syrian mosques and the Iranian Ayatollah in the suburbs of Baghdad and Basra. After the American-led invasion of Baghdad, statues of Saddam Hussein—Saddam with his hand outstretched, Saddam the Babylonian, Saddam the warrior—were felled in acts reminiscent of the end of Soviet rule in Eastern Europe; during the Syrian crisis, images of Bashar and Hafez al-Assad have met the same fate.

Thus the conflation of kufr and shirk in the minds of ISIS fighters, combined with the conflation of political and clerical images in the streets of Syria and Iraq, have created an environment where the distinction between religious and secular has become blurred. In this context, the word “shirk” has increasingly been used by ISIS to go beyond its scriptural concept of association. It has become something of a catch-all phrase used to describe how the Islamic State defines itself: fighting the shirk of Bashar, the shirk of passports, the shirk of national poets and museums, the shirk of Shia mosques.

Forthcoming, Part II of III: Image-maker vs. image breaker: Is the ISIS media machine in tension with its mission to destroy graven-images?

Image: Islamic State fighters burn their passport in a video where a commander cites the Qur'an and religious philosophy. (Photo: Screenshot/LiveLeaks)