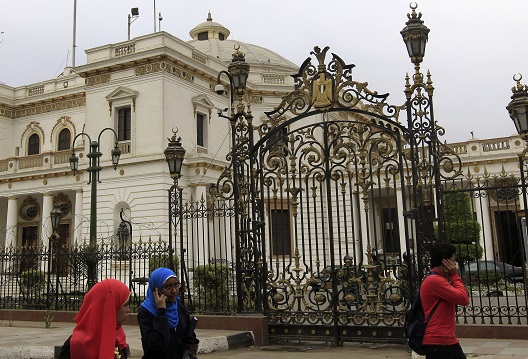 Many have argued that Abdel Fattah al-Sisi’s likely election as Egypt’s next president is an indication of a return to Hosni Mubarak-era policies. However apt the comparison may or may not be, the analysis overlooks one key advantage Sisi lacks. There is no longer a National Democratic Party (NDP), the party faithful to ousted president Mubarak, through which the presumed President Sisi can enact policy. He is on the record to neither form nor join a party through which to govern.

In its place exist a large number of smaller parties, which are in one sense a result of the revolution and its aim to diffuse presidential power. Sisi will need to work closely with these elected representatives; according to Article 146 of the constitution his choice of prime minister and the cabinet he is tasked to form must meet with legislative approval. Otherwise, the majority party will form the government.

The old NDP did not threaten Mubarak’s choices, for it was less an ideological vehicle than a means of access to executive favor. The coming parliament stands to be different, for most parties have already staked out distinct positions in electoral competition. But the phenomenal pull of Sisi is exposing fault-lines within these parties, blurring the lines of ideological distinction.

This is the joint explanation of the recent defection of thirty-one members of the Egyptian Social Democratic Party (ESDP) to the Free Egyptians Party (FEP). Both parties were created after the 2011 revolution. They ran together as the Egyptian Bloc in the first post-Mubarak parliamentary elections, and were equal partners in the National Salvation Front to overthrow former President Mohamed Morsi.

All the while this was understood as an alliance of convenience. As liberal parties, they had common cause against an Islamist agenda, but economically they were distinct. The FEP was funded by businessmen to be center-right, while the ESDP emphasized social justice to be center-left.

In recent days further distinctions emerged when the FEP decided to officially endorse Sisi for president, while the ESDP, aware of internal disputes, chose to remain officially neutral, allowing members their personal preference. Why then should anyone defect?

“This was brewing for a long time,” said Naguib Abadir, a founding member of the FEP. “The straw that broke the camel’s back was the decision not to endorse a presidential candidate.”

Abadir described steady discussions of a merger that never materialized, but emphasized his belief that the FEP more closely reflected the mood of the street and nation. Early on the ESDP transitional government, especially Ziad Bahaa el-Din as deputy prime minister, appeared philosophically inclined toward political reconciliation with supporters of Morsi. Their secretary-general Ahmed Fawzi has recently expressed concern about a possible return to autocratic rule. These have not proven to be popular stands, and the FEP has not echoed them. “We do not feel threatened by the army,” Abadir said, “we feel threatened by the Muslim Brotherhood.”

Ehab el-Kharrat, a founding member of the ESDP, described the defection as a difficult blow. “We are very concerned because these are a number of key leaders,” he said. “It is about supporting Sisi. They did and this is not the case with us.” He mentioned, however, that leaders have transferred back and forth between the two parties as merger discussions faltered. Bylaws disputes and friendly personal rivalries may also have contributed.

But Sisi appears to be the difference-maker. Ayman Abu el-Ela has stated as such publicly, and Kharrat named Mahmoud Ramzy, Adly Toma, Alaa Abour, Emad Gad, and Atef Adly as some of the principle leaders departing beside. Outside of these, 90 percent of defections come from the governorate of Mounifeya, he said, describing the home of former presidents Anwar Sadat and Mubarak as longtime proponents of a strong state.

Economics, meanwhile, has very little to do with it according to Kharrat. “In actual fact the FEP program is nearly the same as ours,” he said. “They lean to the left now.” He also explained how his party, though social democratic, is not against capitalist principles like the creation of wealth, entrepreneurship, or the ability of anyone to grow rich.

FEP’s Abadir recognized that early on that the party had a perception problem due to its high finance backers. But he emphasized that the party believes strongly in social justice, and it is only the means that differ. Rather than raising taxes on the rich, for example, the informal sector of the economy should be formalized, with lower taxes an inducement producing higher overall tax revenue. Free education and social security are essential.

Economic perceptions aside, both Abadir and Kharrat recognized the Dostour Party as a more natural ally of the ESDP. Kharrat lamented that they had not yet merged, while he predicted a merger with the FEP would never happen. But these are differences of philosophy, he asserted. “In political theory we should be away from them, but our positions are not that different.”

The comparison with the Dostour Party is useful, for it has chosen to endorse Sisi’s opponent, Hamdeen Sabbahi, as a statement of the revolution. The current liberal fissures are based on a positioning vis-à-vis the mantle of January 25–June 30. Both the FEP and ESDP lay claim, but the figure of Sisi – respected by both – is divisive. The defectors have chosen in favor of his presidential candidacy.

Oddly enough, while the phenomena of Sisi exposes the secondary nature of ideology in Egyptian politics, it may conversely revitalize it. Perhaps now the ESDP will be more social democratic, and if so, the people can choose between them in parliamentary elections.

Even so, their choice may not be reflected in what may become a non-ideological parliament. If recent proposed amendments to the parliamentary elections law are passed, party list candidates will possess only 20 percent of seats, while individual candidacies and presidential appointments make up the rest. If the past is an indication, this means winners may come from the strength of their family, tribal, and patronage networks, not their ideological convictions. The 2012 parliament was dissolved for allowing political parties to compete for seats designated to individuals.

Kharrat anticipates the ESDP and FEP will cooperate with other liberal parties anyway, while Abadir is not so sure. Perhaps they will; there is still the potentiality of Islamist competition through the Salafi Nour Party, which is, however, also rallying around the person of Sisi. Of course, Article 74 of the constitution barring parties formed on the basis of religion may remove them, and furthermore the support of its conservative base is under question following their support of Morsi’s removal. Sisi appears to be their only bet.

But until the political situation stabilizes, there is little likelihood of ideology coming to the forefront of campaigns. With the Brotherhood sidelined, the question of religion is largely replaced by the question of Sisi, and his discourse of security and stability. Should he win, the interplay between him and parliament may determine whether or not the decay of ideological distinction continues.