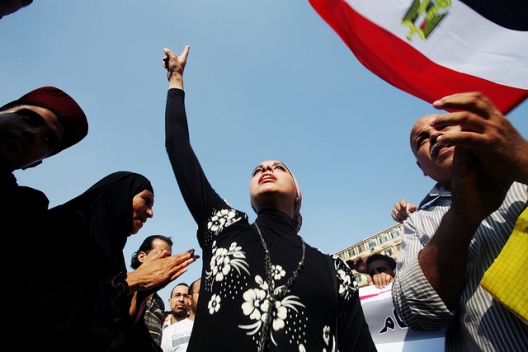 Suppose you have a daughter at the age of marriage and an appropriate groom proposed to her: somebody who’s well off, well educated, with a promising future ahead of him, in addition to his good upbringing and religiosity. The only fault with him is that he was divorced with no children. Would you accept that man as a husband for your daughter? Most probably you’ll ask about the reason for the divorce to make sure that the reason for the marriage’s failure didn’t lie with him, and then accept him as a son-in-law.

What if the opposite happens? If your young son who hasn’t been married before asks to get married to a divorced woman, praising her personality and her manners? Most likely you would completely reject the idea. Unfortunately, this contradiction in behavior reflects our real perception of women. No matter how positive our talk is about women’s rights, at critical moments we often reveal our disrespect for them through our actions.

When we praise somebody for his courage we say: “he’s a real man,” as if courage is exclusive to males, and when we threaten a man, we tell him: “by God, we’ll make you wear the veil.” When the police torture a detained man they humiliate him by giving him a woman’s name, as if masculinity were a symbol for honor and courage whereas femininity is a reason for humiliation and subjugation. The world has already rid itself of these backward ideas; masculinity is no longer a privilege and femininity is no longer an imperfection.

Indeed, in Egypt we swing between two views on women; one is progressive, and considers a woman a human being with all the abilities and faculties of a man, if not more. The other view is a backward one which reduces a woman to being just a female, no more, no less. Her main function is seduction, in addition to being a human machine for producing children and a housekeeper who washes, cooks and sweeps the floor. Anything other than that is of less importance.

For decades, these two views have struggled with each other in our country. At the end of the nineteenth century there appeared in Egypt a great thinker, Imam Mohamed Abdou (1849- 1905) who presented a contemporary broad-minded reading of Islam that rid the Egyptian mind of superstitions and gave women their dues by admitting their rights as human beings. Religion thus turned into an incentive for a renaissance and all of society took a leap ahead. In spite of the British occupation, Egypt achieved progress in all fields and Egyptian women got rid of their shackles. There appeared the first Arab women to be educated, to work, to drive a car and fly an aircraft, to enroll in university, and join the parliament and government. During the Nasser era, women progressed in all fields.

Then came the seventies, and oil prices in the Gulf region after the October War soared. Millions of Egyptians migrated to the Gulf and came back with a Wahabi reading of Islam, a narrow-minded reading that is contrary to that presented by Mohamed Abdou. Millions of dollars went to new preachers who never studied theology in an academic manner. They were just disciples of the Wahabi sheikhs and they came back reiterating backward ideas that were revived after a whole century of their eradication from Egypt. I can’t find here a better example of the Wahabi’s perception of women than what one of the new preachers said in his television program:

“Suppose a man craves sweets and he has two pieces of candy in front of him, one is wrapped in silver paper and the other is left for flies hovering over it, which would he choose? Of course he would choose the wrapped one and he would be disgusted at the exposed one covered with flies. That’s why a man prefers to get married to a veiled woman as she’s like a wrapped piece of candy, keeping her sweetness to her husband, while the uncovered woman is like the other piece of candy which is exposed to everybody and covered with flies.”

In addition to inciting hatred of unveiled women (including Christians), this preacher’s words reflect the Wahab’ attitude towards women. A woman for them is a piece of candy created by God for us- men- to enjoy. Obviously, a piece of candy has no brains, feelings or will and so a man has to watch out for his piece of candy so as not to allow another man to eat it.

The “candy logic” explains the reason for the pervading sexual harassment in Egypt. Until the end of the seventies, the head scarf wasn’t common among Egyptian women. They used also to wear modern and revealing clothes, yet sexual harassment was very rare at that time.

Then the Wahabi thinking prevailed and most Egyptian women donned the head scarf, several of them have even opting for the niqab (face veil). Despite this, sexual harassment has spread like a plague; Egypt now comes second after Afghanistan in the rate of sexual harassment all over the world.

Many attribute the frequent occurrence of harassment to either women’s clothing (which proved untrue as many victims of harassment are veiled), the financial challenges men face when it comes to getting married, (as if his deprivation is an excuse for committing this crime), or that those young men weren’t well brought up (as if upbringing could be separated from culture and social circumstances).

All the above reasons are, in my opinion, secondary because the prevalence of harassment is mainly attributed to the change in the attitude towards women on the part of Egyptians. If you think of a woman as a piece of candy that you crave but you can’t buy (marry) then if you get the chance to have a bite of one that’s owned by somebody else with no punishment, you won’t hesitate. Whoever harasses a woman on the street thinks of her only as a body. If he had ever thought of her as a human being with feelings and dignity, he would have never harassed her. The progressive humanistic attitude towards women retreated in favor of the Wahabi backward attitude until the January Revolution took place. Then everything changed.

A revolution is not just a political change but a total humanistic change that causes major change in all fields. A revolution means that people change their worldviews and replace them with new concepts. An example of that is the Egyptian who was long accused of being cowardly, submissive and incapable of action who suddenly turned into a brave person, who faces bullets and is ready to die for the sake of freedom.

The authorities’ response to protests was violent, particularly against women. In fact, the three regimes – under Mubarak, SCAF and Morsi, despite their differences in many aspects, shared the same backward attitude towards women. Violating, beating and dragging women on the floor are all clear messages sent by the authorities to every woman in Egypt that her natural place is at home and that if she takes to the street, her body will be violated in front of cameras to be shamed and scandalized.

The Egyptian woman’s struggle hasn’t stopped since the eruption of the January Revolution 2011 up until the great second wave of the revolution on June 30. However, when the fifty-member constitutional committee was formed to implement reform of the Brotherhood’s 2012 constitution, we were shocked to find that the number of women in the committee was so small that it doesn’t even represent their percentage in the population nor does it live up to their role in the revolution. The fifty-member committee are all nationalist and revolutionary figures but reducing the number of female members to just four means that whoever formed the committee considers the writing of the constitution a serious and meticulous task that can be shouldered only by men.

Here we are hit again with the logic of the piece of candy. I call upon the fifty-member committee to take all necessary measures that would enable Egyptian women to gain their full rights.

This might require an article in the constitution that grants women a quota or a percentage of seats of the parliament and all other elected bodies. This positive discrimination of women, in my opinion, is (temporarily) necessary as the attitude of the dominant culture will lead to women’s marginalization in any coming elections.. The revolution will continue until it achieves all its goals and one of the most important of those goals is the right of Egyptian women to be treated as independent human beings with full rights and not as candy pieces, whether covered or uncovered.

Democracy is the solution.

Alaa Al Aswany, the Arab world’s bestselling novelist, is the author of The Yacoubian Building, Chicago, and Friendly Fire.