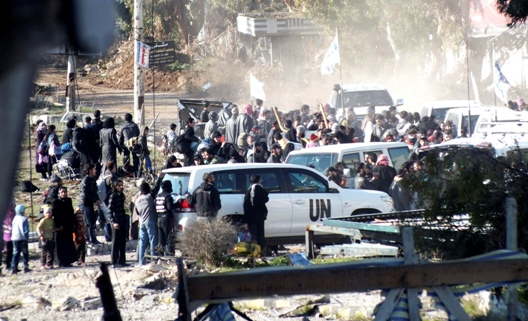 By Syrian standards, the violence in the Old City of Homs this weekend was nothing out of the ordinary. Fourteen were killed and dozens injured as mortar shells and sniper fire targeted international vehicles seeking to evacuate civilians and deliver aid to thirteen neighborhoods that have been under government siege for nearly a year and a half. There were no beheadings, no torture, no sarin gas; there were none of the exploding, shrapnel-filled barrels that continue to level residential buildings in Aleppo, just two hours north. Indeed, the successful evacuation of some 1,200 residents—many of them sick, starving or wounded—since Friday has made this operation a striking humanitarian achievement in a civil war increasingly defined by atrocities on both sides.

Yet the repeated attacks on the United Nations and Syrian Arab Red Crescent (SARC) convoy—which took place Saturday and Sunday during a UN-brokered ceasefire, which has now been extended another seventy-two hours—could well be the most significant single episode of violence since the chemical attack last August that killed over 1,400 and nearly triggered a United States intervention. The attacks on UN and SARC personnel were momentous not for the damage inflicted, but for what they foreshadow about Syria’s continuing descent into anarchy. They laid bare the extent to which international norms no longer apply in Syria—even when international actors have a direct, physical presence—because the Syrian government is unwilling or, potentially, unable to enforce them, even when it has ostensibly agreed to do so. On one level, this speaks to the overwhelming odds that will confront future efforts by international actors seeking to stabilize the situation in Syria. More importantly, it is the starkest testament yet to the likely irrelevance of top-down “political solutions” in a conflict increasingly devoid of any central authority capable of enforcing them.

It remains unclear exactly which party was responsible for the violence. Regime and opposition figures have traded accusations, with state media blaming the incident on “armed terrorist groups”—a catchall term for rebel fighters. While it is theoretically possible that opposition militias were responsible for the attacks, it is distinctly unlikely. The rebel forces holding sway in besieged Homs tend to be aligned with the moderate, Western-backed Free Syrian Army, which has stated its willingness to support the Geneva II process (of which this ceasefire was a result) and, generally speaking, has been less willing than its extremist counterparts to target civilians. Moreover, FSA factions have a vested interest in allowing civilians to escape from besieged neighborhoods, as the regime’s collective punishment of “liberated” areas—whether through forced starvation or indiscriminate bombardment—has had a corrosive impact on popular support for rebel fighters.

A far more likely theory—and one that UN officials have reportedly endorsed—is that the convoy was attacked by pro-Assad forces, whether from the Syrian army itself or from irregular forces, most likely shabiha gangs or the semi-official National Defense Forces (NDF), which for over a year have received funding, arms and training from the Syrian government.

If indeed the attacks were the work of pro-government forces, the question becomes whether—and to what extent—Damascus was actively involved. If, on the one hand, the Syrian army played a direct role in the bombardment, we face the reality that Bashar al-Assad’s regime is prepared to deploy lethal force even against international humanitarian workers acting under a ceasefire to which Damascus was a signatory, despite Russian pressure to cooperate and under maximum scrutiny from Western media and the international community. While not altogether surprising, this would be a particularly emphatic indication of the Syrian government’s disdain for even the most basic of international norms, and of its confidence that it can proceed to flout these norms with impunity.

If, on the other hand, shabiha or NDF fighters were acting without government direction—or even against Damascus’ wishes—this would confirm that Syria’s security apparatus has completed its gradual transformation into a loose collection of mostly Alawite militias, over which the Syrian regime exercises only sporadic control in areas beyond the capital. Syria’s civil war has long been hurtling toward precisely this brand of brutal, no-holds-barred gang warfare, as Damascus has become increasingly reliant on militias drawn from an Alawite minority convinced that its very survival is linked to that of Assad.

The great irony, of course, is that the Syrian regime has long derided its political opposition for its disunity and tenuous influence inside the country, when Damascus itself has largely handed the reins in its counterinsurgency to untrained, undisciplined local militias. That said, the opposition’s fractiousness remains a major factor; humanitarian operations like those in Homs would likely prove even more volatile in a city like Aleppo, where a mosaic of hardline rebel groups holds sway rather than the FSA-aligned forces in Old Homs.

It is difficult to say which is more troubling between a Syria where government forces brazenly open fire on UN aid workers and one in which the security apparatus has lost control over its plainclothes auxiliaries. In either case, the events in Homs suggest that the Syrian conflict has entered a phase where internationally brokered agreements will be largely compromised unless third party actors are prepared to guarantee them by force.

As the second round of the Geneva II talks moves forward this week—and as the Homs ceasefire is extended—Washington and its allies should do everything possible to ensure that the attacks in Old Homs do not emerge as a precedent. This will mean pressing Moscow to impress upon Assad the imperative of enforcing ceasefires, including by taking steps to rein in loyalist militias (such as cutting the flow of arms and funding). Secretary Kerry was unequivocal in his support for the opposition and his condemnation of the regime during the conference’s first round; he should maintain this tone on the issue of ceasefires, refusing to let piecemeal humanitarian gains—critical though they are—come at the expense of enforcing UN-brokered agreements.

Ultimately, however, it may prove the case that Moscow and Tehran (and perhaps even Damascus) have, like Washington, lost much of their ability to influence events in Syria. In many ways, the jarring images of UN trucks trapped by shelling in Old Homs are the next logical stage in Syria’s spiraling civil war—the direct extension of the nihilism that, over the past three years, the regime has successfully instilled in its supporters: Assad, or we burn the country.

Alex Simon is a reporter and translator with Syria Direct, an Amman-based news outlet covering the Syrian crisis. He tweets at @AlexGSimon.