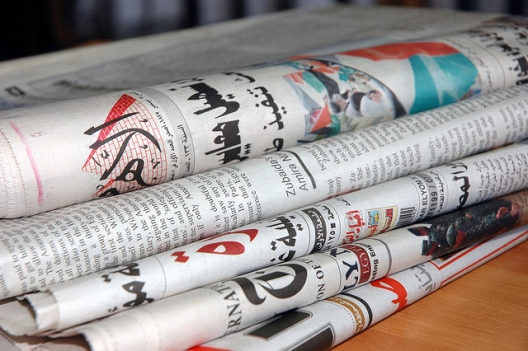 In a speech delivered in early August at the opening of an ambitious Suez Canal development project, President Abdel-Fatah al-Sisi said, “I demand that Egyptians should be united, and the media has a great responsibility to help achieve that goal. I envy late leader Gamal Abdel-Nasser because when he spoke, he had all the media on his side.” He added, “We are in a big battle, and the media should help in this battle. They should tackle the issues quietly, avoid sensationalism, enlighten Egyptians and concentrate on national goals.”

During his short presidential campaign in May, which was limited to a series of television interviews, the former defense minister and one time head of military intelligence said that Egypt needed “at least twenty to twenty-five years” to be able to enjoy a Western-style democracy. He repeatedly referred to the media’s alleged role in mobilizing the population behind his effort to restore security and improve the economy after nearly four years of turmoil.

By invoking Nasser, who managed to get “all of the media on his side” by nationalizing private newspapers in 1961, turning all journalists into government employees, and maintaining tight control over the state-owned television and radio, Sisi increased fears that the short era of unprecedented freedom enjoyed by the media after former President Hosni Mubarak’s removal has come to an end.

Nasser, a charismatic Arab nationalist leader, passed away 44 years ago. His successors, Anwar Sadat and Mubarak, radically altered his socialist policies and alliance with the former Soviet Union; they opted for an open economy and a strategic relation with the United States, but they maintained Nasser’s authoritarian style and tight control over the media. Sadat eased restrictions in the late 1970s and allowed a few opposition party newspapers to publish. (The state, of course, owned huge media establishments.) However, he became fed up with the criticism of his rule, and in the fall of 1981 closed down opposition newspapers and threw more than 3,000 opponents in jail. In October, he was assassinated by Islamic extremists.

Mubarak allowed opposition newspapers to publish again, but there were “red lines” that journalists understood should not be crossed — criticizing the president, or members of his family, personally, reporting on any matters related to the Armed Forces, or dealing with the thorny issue of relations between the Muslim majority and the Coptic minority. Thus, the media could criticize the government, the prime minister, and particular ministers or governors, but not the president, who was given special status as an “arbitrator” above all other officials. Nasser, Sadat, and Mubarak were also keen to maintain the sole right of appointing the editors-in-chief of at least 54 major state-owned daily newspapers and magazines, including Al-Ahram, Al-Akhbar and Al-Gomhouriya. Under Nasser, censors reviewed all items before publication; under Sadat and Mubarak, editors in chief exercised self-censorship.

For over six decades, it was nearly impossible to get a license to publish an independent, privately owned newspaper, let alone open or run a privately owned radio or television channel. In Mubarak’s last few years in office, two private television Egyptian channels, Dream and Mehwer, were allowed to operate, but only on satellite feed, and on condition that they restrict their offerings to entertainment programs and avoid news broadcasts.

This entire set up nearly collapsed after Mubarak’s resignation on February 11, 2011. Just a few weeks later, dozens of private Egyptian satellite television channels and newspapers emerged, and the few old ones freely reported on all issues amid an unprecedented interest among Egyptians to follow political news and developments.  For the first time, the Muslim Brotherhood and other political Islamic groups were also allowed to launch their own television channels and newspapers. However, despite demands that the overly employed state-owned media, both print and television, should be privatized, there was hardly any movement on this front.

When Morsi came to power in Egypt’s first democratic presidential elections, he showed no desire to ease control over state media, and replaced editors and board chairmen with Muslim Brotherhood loyalists whose main job was to polish the president’s image and deliver the message that all was perfect and under control.

Meanwhile, the sudden opening up in media freedoms after the January 25 revolution left the scene extremely chaotic with no respect for basic journalistic standards such as accuracy, objectivity, or balance. Each newspaper or private satellite television channel reported what its owner or sponsoring political party wanted, especially through increasingly popular talk shows. Channels traded accusations against one another: those owned by political Islamic groups issued death edicts or fatwas against secular opponents, and others portrayed the Islamist groups as suspected terrorists who wanted to establish a Taliban-style Islamic state in Egypt.

During his year in office, Morsi complained about the influence of private television channels owned by business tycoons known for their strong ties with the former Mubarak regime, holding them mainly responsible for increasing opposition to Muslim Brotherhood rule. However, critics argue that those channels had an influence only because many Egyptians were truly unhappy with Morsi’s failure to run the country; since the wealthy Brotherhood group also had the opportunity to own and run newspapers and television channels, Morsi’s lack of support cannot be blamed solely on the media.

One of the first measures Sisi took after Morsi’s removal on July 3, 2013 was to close down nearly a dozen television channels and newspapers owned by the Brotherhood and other political Islamic groups. Journalists, producers, and even cameramen were rounded up from studios while on air, and they were taken into custody. While the majority of those arrested were released, a few remained in jail, especially those working for the Qatari-owned Al-Jazeera, known for its support of the Brotherhood and other political Islamic groups. Those arrested included three journalists working for Al-Jazeera’s English Channel who have been sentenced to seven years imprisonment for allegedly belonging to a secret Brotherhood cell.

Meanwhile, the remaining wealthy television channels owned by Mubarak loyalists, such as Sada al-Balad, al-Qahera Wal Nas, al-Tahrir, and al-Fareen, used the opportunity of Morsi’s removal to launch sharp attacks not only against the Brotherhood, but against all those who took part in the January 25 revolution, including the secular radical youth movements April 6 and prominent figures like former Vice President and Nobel Peace Prize winner, Mohamed ElBaradie.

Privately owned media has played a major role in mobilizing support for Sisi in his ambition to become president, portraying him as the only one capable of running the country and confronting terrorism amid an extremely chaotic regional situation. Sisi’s repeated remarks on the media’s role in “mobilizing the population” behind his ambitious goals also left little room for any opponents to air their views, a noticeable change from the mood that prevailed during the first three years after Mubarak’s removal.

The new Constitution approved in January 2014 calls for the independence of state-owned media and the creation of a National Media Council to oversee their activities and to draft a Code of Ethics that would apply to all media operating in Egypt. However, the council is to be created by parliament, which has not yet been elected. In the meantime, the head of the state-owned television was appointed as acting minister of information. Not long after Sisi’s election, new editors in chief for all of the major state newspapers and magazines were also appointed by the Higher Press Council, a body formed by interim President Adly Mansour.

Sisi’s vision of the media as a propaganda tool to rally the nation behind the president might not be different from that of former US Secretary of Defense, Donald Rumsfeld, who created the “Office of Strategic Influence,” during the 2003 war against Iraq. But in a country that witnessed a popular revolution against authoritarian rule, Sisi’s statement and attempts to rally the media behind him are a definite setback to the aspirations of millions of Egyptians who filled Tahrir Square, demanding, “Bread, freedom, social justice and human dignity.”