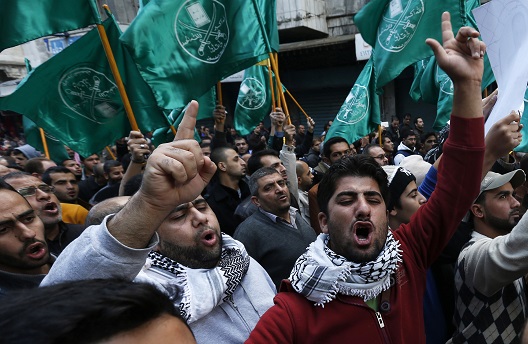 Jordan’s government-influenced media has declared the Islamic State (ISIS or ISIL) as an affront to Islam and human dignity and availed itself to the coalition fighting the militant group. Jordan hosts an undisclosed number of US troops and advisers, alongside drones and combat aircraft. Its intelligence directorate regularly collaborates with the CIA, and advanced radar systems, anti-missile batteries, and battle tanks—all provided by Western allies—line Jordan’s border with Syria and Iraq. US Secretary of State John Kerry’s November visit underscored the kingdom’s role as a multilateral staging ground. As coalition jets pound targets in Syria, Jordanian special forces have attacked ISIS units in Iraq. The recent deployment of French aircraft to Jordanian soil, alongside recent news of a fatal crash involving an American F-16 jet (the first official US death from Operation Inherent Resolve) only adds to this tension. In this anti-ISIS fervor, some Western analysts have urged crackdowns against a latent threat to regime stability—Jordan’s 20,000-strong Salafi movement, whose brand of conservative Islamism stands apart from the kingdom’s larger and more moderate Muslim Brotherhood.

Some of these Salafis back ISIS, and have few qualms about an Islamic “state” coming to Jordan and toppling the Hashemites. Indeed, more than 2,000 Jordanians have left to fight in Syria. While the public generally supports efforts to contain ISIS, it also rejects the possibility of contributing troops for a ground war. The implication of this bodes ill for the ever-controversial issue of democratic political reforms, which have been mired in a stop-and-start pattern for decades. For alarmists, the Hashemite monarchy should not consider the notion of greater democracy, which might devolve power away from its near-absolutist reign and potentially transfer it to unsavory opposition forces. It must maintain internal stability all costs.

Such alarmism needs recalibration. Undoubtedly, the Hashemite kingdom is in a tough spot. It saw thousands of demonstrations during the 2011-12 Arab Spring, including unexpected protests against corruption within tribal communities long portrayed as the state’s loyal bastion. It is not only struggling to deal with more than a million Syrian refugees, the government is also broke. It needs Western and Gulf aid while dealing with enormous foreign debt—financial scarcity so onerous that it has quietly raised billions of more dollars by issuing Eurobonds guaranteed by the US Treasury on the international market. Yet does it follow that a credible threat against the monarchical regime exists in Jordan?

Despite the hysterics about ISIS, the Salafi trend in Jordan has far less revolutionary potential than imagined. Imagine Jordanian politics as encompassing different trends, among them youth, liberals, independents, nationalists, and Islamist; and among the Islamists, imagine the Salafis as representing a small (if outspoken) branch. Of those Salafis, active jihadists who desire to Islamize society through violent means represent a tiny minority, and virtually all are under careful watch by security forces. The presence of angry bearded men in poor tribal towns like Ma‘an does not an Islamic revolution make, despite the media’s efforts to hype up such images. That Jordan has contributed 2,000 fighters to ISIS is disconcerting, but it is not the leading contributor. Nearly 3,000 have come from Tunisia and 2,500 from Saudi Arabia; the UK and France alone have contributed nearly 1,000. If Salafism is as widespread as doomsayers pronounce, then surely thousands more Jordanians would be flooding the battlefront to propel the Islamist crusade.

In truth, most Jordanians may be suspicious of Israel and the Western states, but they are hardly supporters of ISIS. Hostility to the United States does not equate to embrace of an extreme Islamist militant network. The Jordanian state effectively regulates religion and opposition in several ways. It registers and licenses all organizations, and employs its own Islamic scholars. It monitors preaching inside mosques, and since the November 2005 terrorist bombings maintains a tight watch upon all Salafi activity. When they do not behave, arrests result. For instance, authorities released Abu Muhammah al-Maqdisi, a prominent Salafi guide, from prison this past summer in return for promises to preach against ISIS. When he began rescinding that promise this fall, the regime reacted swiftly by arresting him. By one count, 150 Salafis have been arrested under charges of inciting violence; some were undoubtedly members of ISIS, but many others were simply guilty by association and will now face state security courts.

Even the Muslim Brotherhood, the far larger mainstream Islamist group with its own political party and a strong legal presence, has been affected by this crackdown. The July 2013 military coup in Egypt and subsequent dismantling of Egypt’s Brotherhood was hailed by the regime as a step forward and since then has maintained a cold distance from the Jordanian Brotherhood. Many fear that the current anti-Islamist climate could result in the wholesale demolition of the Brotherhood’s political apparatus. This includes its competitive party and various outreach branches, which some within the palace enthusiastically advocate despite this organization’s longstanding support for Hashemite legitimacy.

Sadly, then, Western observers have fallen into the familiar trap of prioritizing security over democracy. This bolsters the Jordanian regime’s case for delaying long-promised political reforms. When King Abdullah appeared on national television in June 2011 and pledged a transition to constitutional monarchism, many citizens hailed the move and waited for a royal commitment to such democratic shifts. They are still waiting. Meanwhile, much like previous periods of regional crisis, such as the Iraq War, the regime has drastically constricted the boundaries of civic freedom, limiting how people protest and what they may report, under the pretense of preserving national security. The war against ISIS may have already claimed an American life, but it has also shredded hopes for greater democracy in Jordan.

Sean Yom is an assistant professor of political science at Temple University in Philadelphia, PA.
Wael al-Khatib is an anthropologist and researcher based in Amman, Jordan.

Image: Protesters from the Islamic Action Front wave their party flags and shout anti-Israel slogans during demonstration to show their solidarity with Palestinians and anger at the political arrests, after the Friday prayer in Amman November 28, 2014. The deputy overall leader of Jordanian Muslim Brotherhood Zaki Bani Rsheid was arrested by the Jordanian authorities last week after he criticized the United Arab Emirates for issuing a list of Islamist organization it considered terrorist groups according to local media. REUTERS/Muhammad Hamed